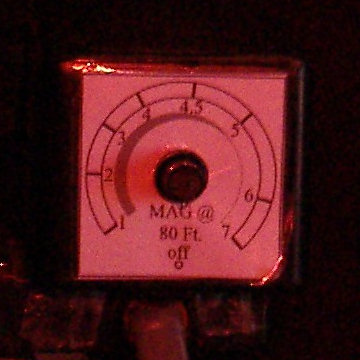 A New Artificial Star for Testing and Collimating Your Scope

The new artificial star offered by Arthur Okun is a new and innovative offering to the telescope owner that makes it much easier to test and collimate your scope regardless of the weather. By utilizing an led set behind a remarkably small 0.0039-inch (100 micron) hole this device along with a potentiometer to vary brightness can be very useful in not only collimating your scope under any and all conditions but to test the optics of your scope as well.

This self contained device has a ¼-20 hole for mounting on any camera tripod thus making it very easy to mount an aim in any direction and angle so as to assure that it can be aimed easily into the scope being checked. The real benefit to this device over others offered, however, is that the brightness of the light source can be varied with a dial in the back of the box and furthermore the magnitude of the star can be known by aligning the knob with the scale that displays a scale from 1st to 7th magnitude as seen from 80 feet. This is a handy feature that helps to allow the user to collimate and star test the scope with any brightness star desired. Testing the scale against the real stars showed that the light source is somewhat brighter that it’s setting indicates but is within 1 magnitude. 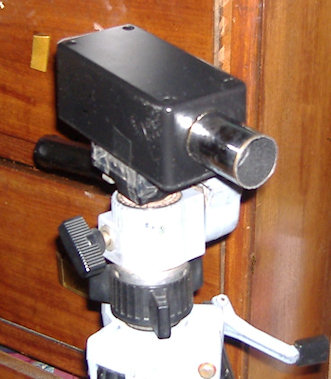 The artificial star runs on 4 AAA batteries that should last a very long time as long as it is not accidentally left on. The hole which is only about 1/10 of a mm in diameter is nearly microscopic. Under the microscope, the hole is fairly circular and when measured against a scale it was confirmed that it is as small as it is advertised. This is quite a feat considering that if viewed from only one foot away it is only 67 arc seconds in angular diameter. At a distance of 80ft it has an angular diameter of 0.83 arc seconds which is the diffraction limit of a 5.5-inch scope. It is essentially a microscopic hole but is very bright when at its brightest setting. 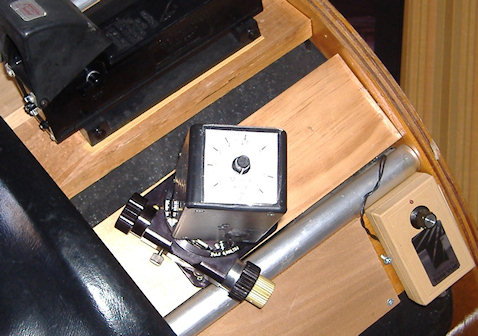 The particular unit Arthur made for me was a custom made unit that allows me to test and collimate my scopes indoors. It has a 1.25-inch barrel that allows me to place the light source into a focuser of any scope. This makes it possible to do a number of things. In an earlier article I posted, I highlighted how it is possible to conduct a star test and null test using another scope known to be of high quality. In my article at http://www.astromart.com/articles/article.asp?article_id=559 I describe the advantages of using an artificial star with a second control telescope to test or collimate another scope in an indoor setting. 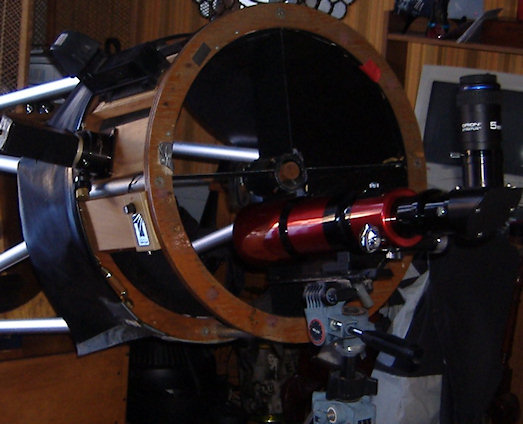 If a smaller hole is desired, it is possible to do so with this version by placing a Barlow lens into the 1.25-inch barrel. This will in turn make the light source smaller and truly make the light source tiny enough to produce a true artificial star that will produce an airy disk while still remaining bright enough to conduct star and null testing.

This device can also be used serve any mirror maker. With its relatively small head on profile it can be used to conduct null tests with unfinished mirrors. This can be done by placing the artificial star exactly at the focal point of the mirror being tested and by placing a completed telescope known to be of high quality right behind the artificial star. By looking through the completed telescope which is aimed at the test mirror the optician can actually conduct a star test on the mirror being tested and furthermore can conduct a true null test by placing a knife edge at the focuser of the high quality scope. The only drawback would be that the center of the mirror would be covered by the artificial star unit itself and somewhat by the tripod holding it in place. This would help to confirm or even eliminate the need for zonal masks and tricky interpretations of the resulting image at the foucault test. But again since the errors of both mirrors are combined in the final result the quality of the mirror in the completed scope must necessarily be very high for his method to work adequately.

In short this is a very well made unit and is easily worth more than the price of $50 especially since these are not readily available from astro dealers. Arthur Okun can be contacted at arthurok@ameritech.net.