The Takahashi Teegul Alt-azimuth Mount is also a RA/Dec mount! 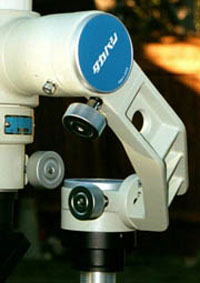 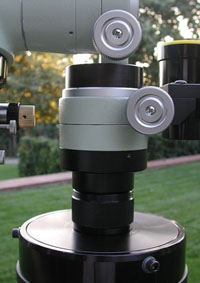 The Takahashi Teegul Mount has always interested me. The 2 axis assemblies have clutches and worm gears typically not found in a lightweight Alt-azimuth mount. The precision and build of the mount are typical Takahashi, yet we astronomers have still found a way to make it more stable with various modifications. I have come up with one more way to increase its usefulness.


The so called Lapides Modification, named after Mr. Lapides and his ideas to increase stability, involved the elimination of the arm with a black disk that attaches the altitude axis directly to the azimuth axis. For astronomy use, this modification gave the mount much better stability and a greater OTA size capacity. The suppliers have adopted this modification and to my knowledge, the original Teegul mount with the longer arm is not readily available.


Indeed, I purchased a “Teegul Altazimuth Lapides Modification Mount” for primarily daytime use with a small refractor. I like the fine adjustment knobs to follow objects, and for gross adjustments, the OTA can be hand slewed after loosening the clutch knobs. However, I can’t help but wonder how to improve its use at night. Is there a better way to track a planet or other object using higher power, other than turning both azimuth and altitude knobs, alternately? If I could only make it behave as a German equatorial mount, too, then stars could be tracked more conveniently with a single turn of the right ascension knob. What a versatile grab-and-go mount it would be for both day and night use. 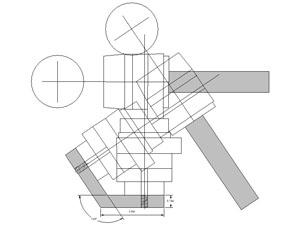 My goal is to make this alt-az mount capable of being polar aligned for star tracking purposes. The degree of polar alignment accuracy for small scope visual observing, in this case, is not super critical.


This modification has 2 parts. The first is a counterweight system and the second part involves reorienting the mount to the earth’s rotation. 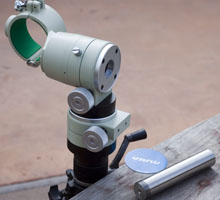 The Lapides Modification, while increasing the stability of the mount, offsets the center of gravity of the OTA to one side of the center of azimuth axis. While not significant with a smaller scope, a larger OTA could create an imbalance that could affect stability of the whole tripod setup. Additionally, in an equatorial orientation where the azimuth axis becomes the Right Ascension axis, the OTA needs to be counterweighted in the typical equatorial fashion.


The blue Teegul cover is removed to reveal an aluminum plate of about ½ inch thick with a hole through it. The hole is too big to simply screw a Losmandy or other brand counterweight shaft into it. I had stainless steel stock turned down to the Losmandy standard 1.25 inches and matching threads cut in the bar and the Teegul plate, then the bar is threaded into the altitude axis assembly. The bar shown weights about 3 pounds and with a counterweight of about 3 pounds for a total of 6 pounds, a Tak FS-60C and accessories balances nicely. A Losmandy 7 pound counterweight or any other C/W with a 1.25 inch bore could be substituted for balancing a 80mm or larger OTA. 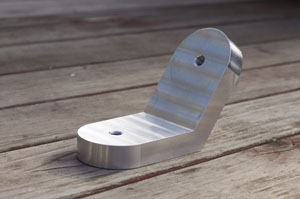 The second part of this project is to secure the whole assembly at an angle of about 56 degrees off horizontal for the 34 degrees latitude of my Southern California location. This is accomplished with the one piece milled aluminum “wedge” shown at left, in its shiny pre-anodized state. It has 2 threaded holes, one for Alt-Az use and one for equatorial use.

The wedge is then kept permanently screwed to the tripod head. I use an old Bogen 3036 model that is fairly stable for this use. Alt-az use typically has the equatorial wedge pointed in any direction, so long as its out of the way. For equatorial use, the wedge points south. Polar alignment can be accomplished by simply positioning Polaris through the threaded 3/8” hole, before the mount head is screwed in.

As far as the teegul’s mount capacity, I believe the weakest link is the attachment of the Declination or Altitude assembly to the black disk (one of the Lapides modification parts). The stability depends on the rather small surface area of the assembly that faces to the black disk. Although I have no intentions currently, in order to accommodate a larger scope, some method of strengthening this described assembly may be in order. A plate that slips over the C/W shaft and is bolted to the likewise 2 hole surface of the Right Ascension assembly, would be one idea. I have read of the 9 pound Traveler being mounted on a Teegul mount. With extras, a 9 pound OTA becomes 12 or 13 pounds. I see this as a practical limit for the Teegul. 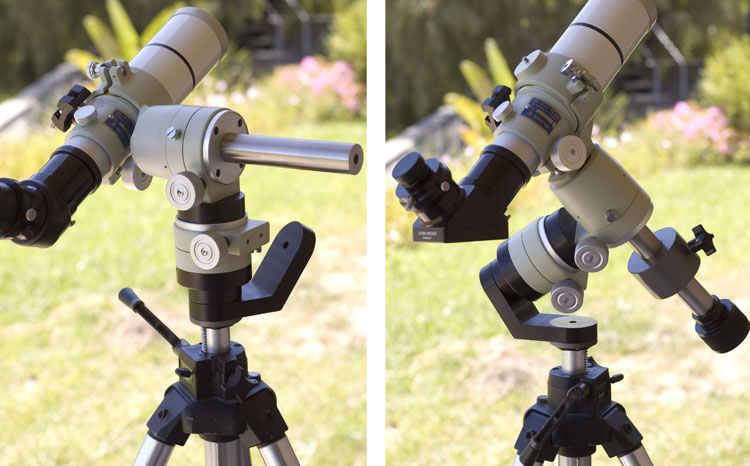 Because this is a visual equatorial setup, it is sufficient to have a wedge to within a degree or so of one’s observing latitude. Although, the Bogen tripod has a bubble level, fine tuning or adjustment upon travel from one’s main location can be done with the tripod legs. As 1 degree of latitude equals about 68 miles, the adjustable tripod legs aids the rigid wedge in having an effectively close polar alignment. The majority of U.S. locations fall between New Orleans at 29 degrees and Chicago at 42 degrees. If I lived at these other locations, the wedge would be designed accordingly.

This application of the Takahashi Teegul Mount, requires one to put into perspective the relative importance of a polar aligned mount for visual use. Simply put, it just makes following celestial objects easier, and its set-up is immediate. For daytime, its conversion back to Alt-Az takes a minute.

As far as a sidereal driven, equatorial, polar aligned Teegul mount is concerned, I’ll leave that for someone else to figure out!