William Optics EZTouch: Next in a series of ultimates? 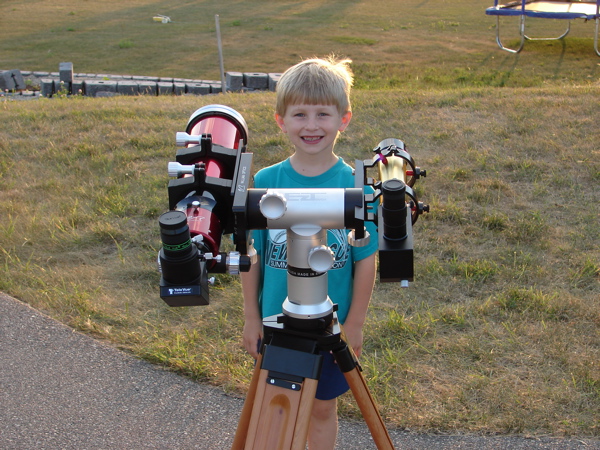 In light of the buzz that greeted the announcement of this product, I am more than a bit surprised that no review has been submitted. I generally won't write a review of a product so recently purchased, but I would have appreciated even a cursory description of this mount prior to taking the plunge, and as you will see, I have already had enough adventures in completing this system. I invite you to read on, secure in the knowledge that I have no comercial interest in any of the products here discussed.

Ideas can be expensive. Several months ago, I was perfectly content with my TV-85/Panoramic system. The Televue had, with bridal consent, taken up permanent residence in my living room, and had morphed from a quick-look astroscope to a triple threat nature/solar/astronomy optic. The Panoramic mount not only gave a smooth ride to the TV-85, but also served as what I then referred to as the "ultimate compact solar setup" with a PST. Did I say ultimate? I meant penultimate...I hope.

The expensive idea occured after taking delivery of a JMB white light solar filter for the TV-85. What if, I pondered perilously, I had a two scope mount so that I could look at sunspots and hydrogen alpha simultaneously? It was nearly precisely at that moment when the William Optics EZTouch hit the shelves of Anacortes Telescope and Wild Bird. As a result, I set off on a quest to purchase a two-scope alt-azimuth mount and scope combination using no more cash than could be extracted from my TV-85/Panoramic on the used market.

If you are considering purchasing this mount, you probably did not need to know my rationale in acquisition, but it may be of some value to know that I am able to compare the EZTouch to the very capable Televue Panoramic (I also own a GM-8 and have had a Takahashi EM-10 in the past). I should also add, although my review photos already reveal, that I am an observer, not a photographer, and that photographic concerns played no role in the choice or evaluation on this mount. At long last, on to the review:

The William Optics EZTouch is a two-sided, non-motorized, non-computerized altitude/azimuth mount. As of the time of this review, digital setting circles are not available. The mount is rated to carry 25 pounds between the two sides. When facing the nameplate, the right side of the mount is channel-cut to accept a standard Vixen dovetail, although the dovetail is held in place by a nylon-tipped set screw rather than a true saddle arrangement. The left side of the mount is pre-drilled to accept a Losmandy-style saddle and plate, which are not included. A wooden tripod with spreader bars, accessory tray and carrying strap are included in the $499 retail price, although the head may be purchased separately for $379.

The mount was well-packed and arrived undamaged. The included instructions were easy to follow and assembly took less than 10 minutes. It was immediately obvious that apples-to-apples comparisons to the Panoramic would not be possible. The EZTouch weighs in at about 25 lbs, double that of the Panoramic/Telepod. Although the footprint is the same, the WO is in all ways a more substantial mount. Nevertheless, having the same footprint means that there is room for the EZT in the living room, providing that it would pass muster cosmetically. Fortunately, it does. It actually looks better up close than it does in pictures, although it is more functional than artistic. 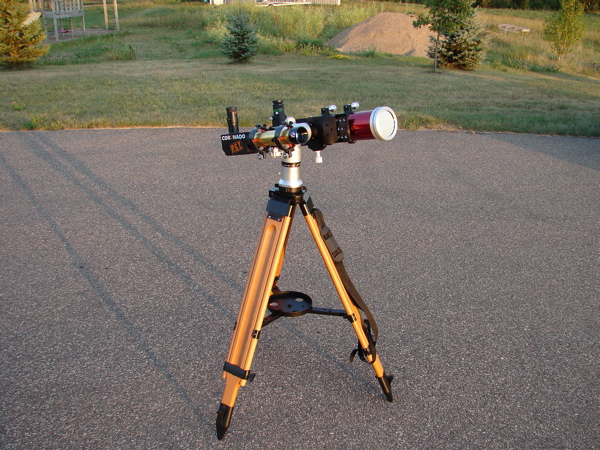 Interestingly enough, though, the mount stays quite stable at full height. Tube vibrations dampen out in about two seconds with the 80 mm WO ZS80FD 10th Anniversary and the PST mounted. I would expect incremental decreases in stability with longer and heavier OTA's, but I was quite impressed. I haven't put my TOA-130 on the EZTouch yet, but I have been tempted. I suspect but cannot prove that performance is better with two scopes mounted due to better balance, but I haven't noticed any problems whatsoever when I remove the PST.

Each axis has a tension adjustment knob. The knobs are not captive to the mount. Depending on the extent to which the load is unbalanced, it may be necessary to add some tension to the altitude bearing to prevent rotation. In general, good balancing is worth the small amount of time invested, but I have been able to throw quite a bit of imbalance at the altiitude axis without having the increase in tension become uncomfortable in tracking. On my sample, the azimuth bearing adjustment seems a bit more gradual and rangier, whereas the altitude bearing has a higher minimum tension and increases more quickly. I suspect that this is by design, but having a slightly lower minimum tension in altitude would be an improvement. The 80mm freely rotates past the zenith with more than 2 inches to spare above the the tripod leg with the focuser fully racked (crayforded?) out.

Motions with the EZT are very smooth under the very reasonable demands that I have placed on the mount. There are no slow motion controls and no guide lever, but the mount does not need them. Again, this mount is substantially larger than the Panoramic, but there really is no comparison in stability or ease of tracking--the WO mount is simply better in this regard. This is quite significant, in my opinion, because the EZTouch is much less expensive than the Panoramic--or is it?

As mentioned, the EZTouch retails at $499, but this is not the whole story. Your configuration may be less expensive than mine, but an accounting of my journey may be helpful.

The Vixen (right) side is pretty straight forward. A standard dovetail should work. In my case, I wanted to mount the PST on this side. Since I was going to need to be able to align the PST with the 80mm, I chose to use guidescope rings. Add $39 for the dovetail and $44 for a functional, but not glamorous set of guiderings. William Optics sells a Vixen-compatible dovetail for $88, but this would have necessitated laying the PST on its side.

The Losmandy (left) side is where the costs start to accrue. Call me naive, but I imagined that a WO refractor might be capable of directly snapping on or screwing in to one side or the other. No such luck (although the newer 66mm WO apos have an L-bracket base that fits the Vixen side). I needed a saddle, dovetail and rings for the 80mm. While I won't elongate the review, I found the William Optics saddle/plate combination to be very solid and their rings to be quite attractive (recall that the 80mm doesn't ever come off the mount and sleeps in the center of my home). Add another $148 for the saddle/dovetail and $119 for a set of rings.

Total cost on the set up was therefore $849, or more realistically $730 if one considers the rings to be a cost associated with the telescope rather than the mount--probably a fair assumption. Incidentally, my total cost for the new setup (not including the cost of the PST) came out to $1750--less than the sale price of the TV-85/Panoramic. Again, I won't belabor the review, but the ZS80FD is a very solid performer, and by no means a disappointment despite having to fill the large shoes of the TV-85.

There isn't much to dislike about the mount. The eyepiece tray is barely adequate, but it spins off in seconds, allowing for a very quick and complete collapse of the tripod for carrying. I may well make a new one, as the stock tray is tapped for both 1.25" and 0.965" eyepieces. Few people own the latter. Also, I would like the ability to remove the tripod carrying strap, but doing so would leave unfilled holes in the wood. I am sure that an acceptible bag can be found, but William would do well to offer one as an accessory.

You will have noticed that this mount is essentially identical in cost to the Televue Panoramic when all costs are considered. Frankly, it is neither as portable or as visually appealing as the Televue, but it is functionally a better mount without being either prohibitively heavy or unattractive. I intend to use it for quite a while. Nevertheless, I think it would be difficult to call the either of the above a bargain. 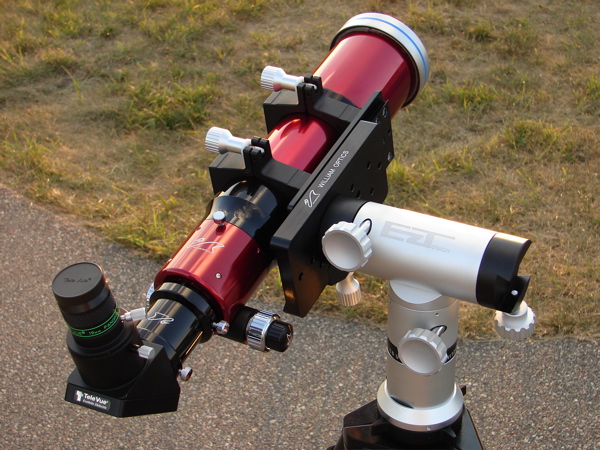 It bears repetition that the EZTouch neither tracks nor supports DSC's at this time. One would hope that the latter are in the works, but there has been no official offering. As such, the EZTouch is probably best suited for the small refractors that so many of us have come to love. These scopes are generally pointed at brighter objects which are relatively easy to find without assistance.

Perhaps the most important point on which to conclude is that this mount does what I wanted it to do. Without sacrificing much in the way of portability or aesthetics, I have gained a more stable and easier-to-use platform and have added the capacity for side-by-side viewing. I have found this to be delightful, whether observing alone or with a friend.