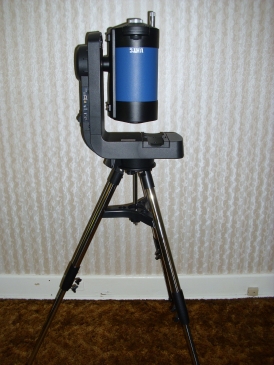 I was excited to see the 2 brown cartons at my door last week, I knew it was the Meade ETX-LS. My scope had arrived, and of course, right on cue, the cold weather and clouds. Patiently waiting for a break in the weather, permitted me to review the Autostar Suite and the manual, yes, I actually read the manual, since this is my first computerized, fully goto telescope. This is part one of a detailed review of the Meade ETX-LS. This part one will focus on the scopes physical characteristics, such as weight, its fit and finish, overall operation, and my initial night out to test the goto capabilities. For those of you that may not be familiar with the Meade ETX-LS, and why it’s really another breakthrough from Meade Telescopes for the astronomical world, let me highlight its main features.

The Meade ETX-LS is a 6" Schmidt Cassegrain Optic. Mine also has the optional ACF (Advance Coma Free) optics with UHTC coatings (Ultra High Transmission Coatings). ACF is designed by Meade to enhance the scopes optical performance by improving the sharpness of the image and flatness of the field of view. It is said to thus perform optically on par with the way more expensive Ritchey-Chretian or RC optical design. I'll go into that at a later time, since I want to focus this post on just physical characteristics and goto capability. The most important feature of the ETX-LS however is the LightSwitch Technology. It permits the scope to be setup, turned on, and with the use of its internal ECLIPSE CCD camera and on board GPS, the scope will level itself and find north, something Meade calls Level North Technology or LNT, and alight itself to the night sky with out ANY user intervention. To say the least I was excited about this feature, and it represents another breakthrough for Meade in astronomical telescope design for amateur astronomers of any level.

Another feature worth mentioning is the "Astronomer Inside". The ETX-LS has multimedia capabilities. It has a speaker, and when you turn the scope on, the "Astronomer Inside" announcer comes on and tells you what the scope is doing, and what step the alignment process is in. In addition, when you have the telescope aligned, and you choose a variety of astronomical objects, it will give you some details and interesting facts on the object. I thought this would be a bit "cheesy" for me, since I've been in astronomy for almost 15 years. However, it was a great feature, and I did learn some things about the objects that I didn't know. What a great scope for outreach! But more on that another time, back to part one of this review process.

How did the scope arrive? - For the purpose of being as thorough as possible, I'll briefly cover the scopes shipping carton to assure everyone it can arrive in good shape. First thing struck me as the size of the thing. It was much bigger then I expected. The shipping box was of decent quality, and the scope seemed very safe in a completely foam lined interior (see pics). It doubles quite nicely as an interim carry case, until I decide I need a more heavy duty one with wheels, to make transport easier. 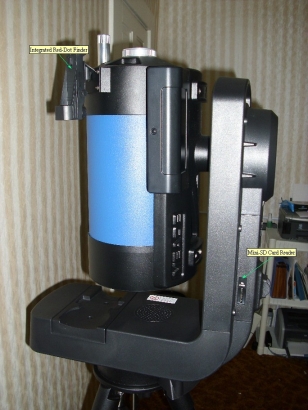 Overall Physical Impression Fit and Finish - There were no noticeable blemishes, and I really like the light blue, non-glossy textured finish of the ETX-LS OTA. 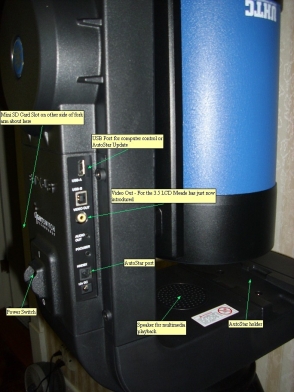 Mount - Big. Much bigger then I thought. I understand some of the posts out there that talked about the large size of the gears and how impressive it was for a 6" OTA. It seems sturdy. I don't like the placement of what appears to be the handle area, at the very top of the fork arm, but its adequate for lifting the scope with my left and, and using the right, grab the bottom of the base. Its light enough, just bigger then I though. It's covered in a typical dark plastic, but it certainly feels beefy. The weight of the scope is very manageable. When the mount is in its cardboard box for transport, it is bulky and you can't fit it through a door long ways, but again, it's not very heavy.

Tripod - At first, after seeing the scopes mount and how large it was, I was suspicious of the tripod and how it would hold up. Field use shows it’s adequate for visual work, and being small and light, it's a plus for transporting. It has 3 spring-loaded screws on the base of the tripod, with the center raised to assist in placing the mount on the tripod head, with just a slight twist, I hear a click, and I can now screw the spring-loaded bolts up so they grab into the telescope base. A piece of cake. There is a plastic wedge that you screw up to strengthen the tripod legs, and it has 3 pre-drilled holes to hold eyepieces. So the tripod is ok, I would suspect adding dampening pads would help, but damping time with the legs almost extended is about 4-6 seconds. The tripod itself is ultra light and very small, so very manageable. 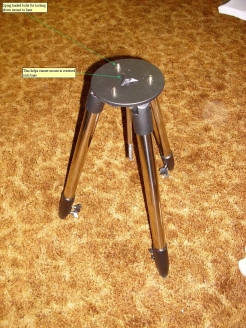 Electronics/Goto - My very first recommendation. Get a PowerTank or external power supply if your going to run the scope in cold weather, well especially cold weather, but most likely get a PowerTank period. My first try out, a night into the 30's, the scope had problems aligning, so I used manual alignment. However the batteries ran out in less than 45 minutes. The very next day, I took it out during the day time to test the GPS again, and within 2 minutes, it found GPS and started the alignment process. The motors were humming much more confidently as well. Obviously, it didn't do the star alignment process, the "Astronomer Inside" kindly informed me that it was too bright outside to view astronomical objects, but I was confident now on the notion that the scope running off of batteries in cold weather is just not going to perform w/o an external power supply. A few nights later I borrowed a friends DC power cord he uses for his LX200 and with my new Celestron Powertank, the small one, setup the telescope for its second round of tests. This time, the scope came to life and moved around rejuvenated by running off the PowerTank. It game a brief introduction to the alignment process, and started to find GPS. Within 15 minutes, it had found its GPS, found home, found level, found north, and proceeded to find 2 alignment stars, after which I choose M31, and bada bing, it was there in the field of view of the included 26mm eyepiece. Very cool!

Contrary to what some reports/reviews out there are saying about the ETX-LS being unable to align in the event the ECLIPSE CCD camera isn't working, the scope can be aligned without the necessity of both the GPS and the ECLIPSE CCD camera. In fact, you can do a one star or 2 star alignment if any problems with either of these components occur. Of course, the main benefit of the ETX-LS are those features, but it's reassuring to know you don't have a complete waist of your clear skies in the event the CCD camera or the GPS are flaky that evening.

For the remainder of the evening I familiarized myself with the Autostar interface, and for each object the scope slewed quickly and confidently, and placed them all within the field of view of the included Meade Series 4000 26mm Plossl eyepiece. Here's the list I viewed within the 4 hours I was out with the ETX-LS.

The Meade ETX-LS has had some initial issues with firmware to overcome, but I'm confident that Meade has addressed those with v1.2 (mine) because the scope worked as advertised. It remains to be seen if that alignment is consistent however, so check back often, since this is the first installment of a series of posts I'm going to devote to reviewing the Meade ETX-LS. My next posts are going to continue to focus on the usability of the goto functions, and much much more information on the optical performance of the scope. It's not a fair assessment in my opinion to judge optics based on a single nights observations, being that seeing conditions can really cause havoc. But I have a 6" f8 dobsonian that has excellent optics IMO, so side by side comparisons are what’s planned next, and for a variety of objects, so please check back for more details.