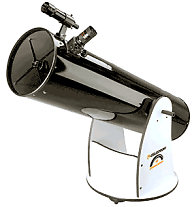 Not too many years ago, when the remake of the classic Japanese monster flick GODZILLA hit the theaters, the phrase “Size matters!” became its compelling advertising slogan. So it is with telescopes. Aperture has always been a major consideration in an instrument’s performance. Recently, when I wanted to acquire a scope with some serious light grasp for remote site deep-sky observing, yet a bargain price and one-man portability, I turned to the obvious choice: a simple, solid –tube Dobsonian.

With myriad available choices, I settled on the new Celestron 12-inch Starhopper, as my previous experiences with Celestron products have been, for the most part, quite favorable. But expectations were not high for this particular Chinese import. A “light bucket” with mediocre optical and mechanical performance seemed to be about all that $849 could deliver. When the scope arrived in two massive boxes, I managed to assemble it in less than an hour with the adequate instructions provided – a fairly straightforward task requiring a minimum of profanity. The black enamel- finished, rolled steel optical tube, of 58” length , with its 9x50mm finder attached, weighed in at a little over 50 pounds, with the primarily white Dobsonian base adding about another 35 pounds. Plastic altitude bearings attached to the tube rest on nylon cylinders on the inside of the mount’s tines, and protruding handles thread from the outside to control altitude tension and permit carriage. The azimuth set-up is somewhat unusual: a “lazy susan” arrangement of a circular needle bearing plate sandwiched between two round metal plates provides motion, a locking knob selecting (or trying to!) the proper tension. A smooth 2-inch rack-and-pinion focuser with 1.25” adapter and a massive 2”, 32mm wide-field eyepiece complete the package. A dc-powered fan is fixed to the optical tube bottom to facilitate cool-down of the 300mm BK-7 mirror. Certainly, this represents a lot of “stuff” for the money and a genuine attempt to improve the Dobsonian breed.

Then came the unexpected: an actual clear night on the very day of a new telescope’s arrival!

When darkness fell, two things became immediately apparent: the big Dob needed some rather major mechanical changes, and the scope’s optics must have been cloned from Zambuto or Swayze or Galaxy! In short: outstanding.

With a clear aperture of 300mm (just under 12”) and an f/ratio of 5, “Godzilla” proved to be more than just big. Perhaps, in the luck of the draw, I was blessed with a scope of exceptional performance, but this Taiwanese (Three cheers for democracy!) monster served up images reminiscent of those provided by the outstanding Cave 12 1/2-inch that I owned in the 1970’s. While truly premium mirrors may ultimately prove to be better, this one delivers some extraordinary images.

With a 5mm Nagler Type 6 in the drawtube yielding 300x, Saturn provided an image of spectacular detail and sharpness. High in the evening sky with steady air, the ringed planet easily displayed the full extent of the Cassini Division, color and density variations in the “B” ring, and a wonderfully evanescent “Crepe” ring. Cloud belt detail on the disk of the planet was colorful, crisp, and well beyond what one might expect. Incredibly, both the Encke minima and actual Encke Division could be glimpsed in the outer (“A”) ring, and the bi-colored aspect of the east and west ansae* was obvious. Amazing! (*ansae is the latin word for "handles" -Ed.)

In similar fashion, lunar detail proved to be exceptional, the surface being peppered with scores of tiny craterlets at 214x with a 7mm Nagler Type 6. The high surface brightness afforded by the big mirror resulted in a spacecraft-like view of wonderful clarity and contrast. Minute details such as the rills near Triesnecker, terraced walls of Aristarchus, and numerous “pock marks” near Copernicus elicited a spontaneous “Wow!” when I first observed them. “Godzilla” is certainly a very capable lunar and planetary instrument.

Ditto with stellar images. A quick star test revealed nearly identical intra and extrafocal images. The relatively small 23 percent central obstruction of the secondary mirror made for an almost perfectly centered silhouette. Out of the box, the scope was just slightly misaligned, and fifteen minutes of fiddling easily dialed in perfect collimation. Classic double stars such as Castor and Gamma Leonis were easy prey at 144x with a 10.4mm TeleVue Plossl, and the neat triple Iota Cassiopieae was striking at the same magnification. The close and challenging Eta Geminorum yielded its faint, close companion at 214x and above, and the rapidly closing Gamma Virginis could be elongated and possibly notched when the seeing steadied.

During all of these observations, spread over a period of three weeks, I never encountered serious thermal problems with the scope. Kept in an unheated garage, it was ready for instant use. As nighttime temperatures fell rapidly, a ten-minute burst from the cooling fan restored lost equilibrium quickly when it occurred. The well-ventilated mirror cell, thin mirror, and metal tube all seem to combine for effective thermal management. However, it is worth noting that this 12-incher is affected more by poor seeing conditions than is a smaller instrument.

In the realm of the deep-sky, this big scope is in its ideal element. I found that a 13mm Nagler Type 6 was perfect for eliciting details from globular clusters, nebulae, and galaxies. The well-blackened tube of the scope’s interior provided a dark sky background, but the attachment of an adhesive-backed piece of black felt opposite the focuser created a slight improvement. Though low in the sky, M 13 was a showpiece of hundreds of pinpoint stars and the “propeller blades” of star-poor areas. M 5, M 92,and M 3, also showed wonderful resolution. It seems that the fine quality of the scope’s primary mirror helps to provide high contrast and excellent magnitude penetration.

Galaxies such as the “Sombrero,” NGC 4565, M 65 and M 66 all showed significant detail, and a low-power (61x with a Meade 24.5mm Wide Angle) sweep of the Virgo cloud was both satisfying and addictive.

Nebulae such as NGC 6543 in Draco and NGC 2392 in Gemini were bright, detailed, and they displayed actual color. No question: a 12-inch telescope really delivers on the “faint fuzzies.” Smaller telescopes are simply not in the same league.

Oh, that “Godzilla’s” mechanicals were as good! The telescope’s mount, in spite of some clever design and engineering, is a travesty – unacceptable in its original form, but capable of being modified into something marginally acceptable. The major problem lies in the azimuth bearings. Even when the lock knob is tightened to white-knuckle snugness, it quickly loosens because it is threaded into a T-nut in the ground board. The scope wheels through a 270 degree arc with the touch of a finger – far too loose and almost impossible to control. The metal plate bearings also impart a vertical oscillation to the tube and increase damping time to more than 5 seconds. One solution to partially cure this problem is to affix three equally spaced felt pads to increase friction. Removal of the threaded nut and replacement by a larger centering bolt with a locking nut helps to keep tension constant. I personally opted for the traditional solution: replacement of the “lazy susan” set-up with Ebony Star formica and Teflon pads. It works, but the too-small plastic altitude bearings, despite the carrying handle/tensioner, result in some vibration and a less-than-optimum smoothness. At magnifications of 200x or above, the scope is somewhat difficult to control. It also makes noise! The thin metal tube creaks, groans, and squeals with every movement, probably upsetting the mating ritual of every frog within a quarter-mile radius. My suggestion for Celestron is to upgrade the basic mount to something more traditional and effective. An extra $50 or so would be a small price to pay for larger (10-inch) altitude bearings, a three- pad teflon/ formica azimuth configuration, and a slightly more robust tube, at least as an option.

Overall, this “monster” ranks as a bit of an enigma. It’s big, capable, and amazingly fine optically. It can be moved about and transported by one reasonably strong adult, and it certainly provides tremendous performance for its modest price. Those accustomed to using smaller telescopes will be startled by both its planetary and deep-sky prowess. I could learn to love it. But like the “real” Godzilla, it lacks refinement, smoothness, and manners, and could profit from a quick course at finishing school to realize its full potential.