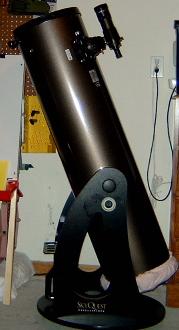 [ARTICLEIMGL="1"]This is the first Dobsonian telescope I have ever owned and my first Orion telescope purchase. I am an experienced amateur astronomer with a technical background.

The Orion XT10 series has existed for several years. Manufactured in Chinese factories, first in a far-flung place called Guan Sheng and most recently at a place called Synta. The XT10i marks a significant evolution of this telescope design with the addition of Intelliscope electronic controller that instructs the user where to push/pull the tube to acquire objects. This review will not address the Intelliscope controller, as this is not part of the basic telescope purchase. I have owned an EQ Newtonian and presently own a computerized, astro-imaging 5” Maksutov-Cassegrain scope.

After the grueling decision of which second scope to buy, I ordered the XT10i from Orion over the phone on August 10, 2004. I spoke to the same person all three times I called to purchase the scope and she was always polite despite my indecisiveness. Bottom line: I placed the order, shipping was a reasonable $65 and the scope arrived in excellent condition, as scheduled.

The shipment came in two boxes, one for the base and one for the OTA. The base arrived a day early, so I impatiently dug into its assembly. Orion provided an addendum to the base assembly instructions advising the new owner that they had permanently affixed the Teflon azimuth bearing pads to the ground base plate. Ah Ha, I thought, there must be something to this and was watchful for any problems with assembly and motion. Assembly was a snap, though I was momentarily horrified to find the top to bottom base plate attachment hardware missing. Fortunately, a quick call to Orion customer service cleared the problem. The friendly, helpful CSR on the other end assured me that the hardware would arrive the next day in the OTA box. He admitted Orion should have placed another addendum to the instruction manual stating that the hardware would arrive in the OTA box. Once the OTA arrived, encoder setup, base plate attachment, finder, and ultimately OTA marriage (it was a lovely wedding) to the base were simple. Total assembly time was over one hour.

Thoughts on the Completed Scope Before First Light:

The XT10i seemed very well balanced in Altitude. The CorrecTension system of variable friction against Teflon bearings seemed to work quite well. In azimuth, the scope also seemed to rotate smoothly about the base, both with and without the OTA. Orion has received criticism for its use of non-pure Teflon material. In an Oct. 2003 article, Sky and Telescope recommends PFA bearings. For anyone dissatisfied with the motions, the simple fixes are to obtain pure Teflon bearings and raise, lower as needed with “milk jug” bearings. To improve base motion (striction), the best advice seems to be sanding or overlaying Ebony Star material available at most “big box” hardware stores. To reiterate, I was entirely pleased with the movement, noting a steady, stable platform. I was also very pleased by how easily the finder assembled. It appeared well machined at the base and fit nicely.


I removed the OTA from its protective packaging. No flaws were noted on the fit and finish. The 2” Synta focuser seemed square and tight, however gummed with the “factory lube”. The 1.25” adapter fit nicely in the barrel assembly. The finder, a robust 9x50 unit seemed large but assembled easily and a good match to the 10” OTA once set into the supplied dovetail. The mirror cell appeared stable and in place. There is a conveniently affixed alignment dot at center mass of the mirror to aid in collimation.

Although the new scope “cloudy sky curse” prevailed the night assembly was complete, my 12-year-old son, Christian, managed to spy the first stellar object, with a resounding, “cool.” With the same star in view, I racked the focuser to reveal a reasonably collimated star-test. Wow, right out of the box, this Dob worked! Later, after employing the supplied collimation cap and my own laser collimator, the star tests revealed sharp, bulls eye patterns. One particularly positive aspect of the scope was the ease with which the finder scope aligned. One only corrects x and y axes because the scope fits into a machined slot against a spring-loaded third screw. Hats off to this extremely simple, highly effective design. On the first clear night the scope turned in an admirable performance from my backyard. My observing notes from 16 Aug 2004 reveal the following: M22 – resolves 80-100 stars with 2x barlowed 12.4mm ep., good color, even spread; M8- loose OC, 25-30 stars resolved with 2x barlowed 12.4mm ep. Several days later I put the scope to the “M13 Test” under good Magnitude 6 skies at my club’s dark sky site: “M13 easy to spot in finder, spectacular resolution of both color and number using 6.4mm ep.” Applying a wider field test, I was able to drink in the entire Double Cluster with a 40mm ep as well as a good view of Andromeda and M110; its stellar meal for the coming millennia.

In the name of full disclosure I’m a victim of aperture fever. Additionally, I wanted to break out of being dependent on a computer to “show me the way” to my celestial targets because a Mak is very difficult to “aim”. However, I was concerned about both the size transition and the manual nature of a Dob. If you’re in the same boat…get over it! This 10” f/4.7 Dob fits in my Dodge Stratus and is faster on the set up than my Mighty-Mak. Without the addition of a zero magnification finder such as a Rigel or TelRad, the scope is a bit of a challenge to initially aim. However, my technique, mastered over a couple nights, is to lay a line with the OTA to my target while hugging the Dob. Then I center the target in the zero mag finder followed by fine tuning with the 9x50 finder. Proficiency came after less than a week and now it’s just a matter of acquainting myself with the skies I thought I knew. Yes, I purchased a star atlas and am working on star-hopping to improve object finding. It’s not that difficult. One audacious morning I even used the Dob to make web cam astrophotos of Saturn and Mercury. While waiting for Mercury to rise, I laid the tube on the Trapezium in M42. Guess what? There’s a lovely view of 132-stacked images on my web page revealing the classic “fish mouth” nebulosity of the Great Orion Nebula. My technique is to “roll” the OTA base with my right hand to gently follow the target.

That whole issue of putting hardware in another box needs to be corrected as this was very disconcerting. Easy fix. There is an annoying rattle between the bottom and top base plates centered on the brass retaining bolt. The horrible gluey lubricant on the focuser is a detractor. I’m hesitant to replace the product for now as it may be in place to shield any focuser machining imperfections. The onset of Old Man Winter will probably dictate the “oil change”. Although a double-ended crescent wrench is supplied with the new telescope to support assembly, the manufacturer does NOT supply a 2mm “hex key” to align the secondary mirror during collimation. I had to borrow a 2mm Allen wrench from my neighbor to meet the immediate collimation requirement and later bought one for a buck at the hardware store. Orion should include the 2mm Allen wrench.

Considering square inches of aperture per dollar and quality I’m pretty sure this is the best scope on the market. Case in point, last weekend I was a few feet away from an Obsession 25” Dob. Although this is admittedly the ultimate DSO instrument for the Dob crowd and I yield that position, I did not notice the several orders of magnitude difference in price and seeing. Putting both scopes through the “M13 test” showed the greatest difference in resolution, stability and overall image quality. Notwithstanding, the Orion XT10i is a stable, portable, priced-to-sell Dobsonian that sets up quickly after going to your favorite dark site as a mid-size auto passenger. A final pleasant surprise included the supplied 1.25” Plossl eyepieces. Both the 10mm and 25mm eyepieces now hold a place in my eyepiece case and compare favorably to other higher priced eyepieces in color, resolution and field.