Class of 85: The TeleVue-85 APO Refractor 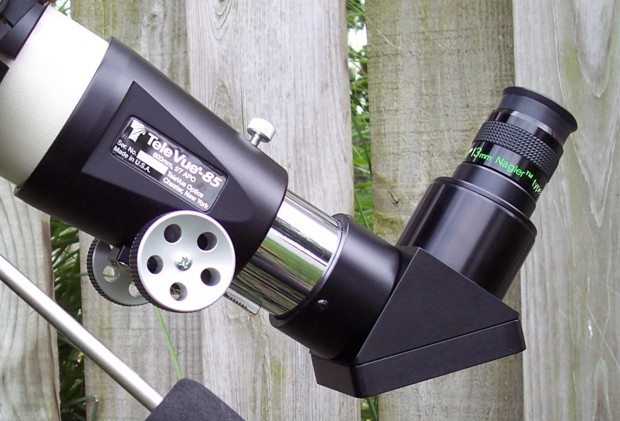 About ten years ago, I began to think that it would be fun to have a small telescope. Ideally, this scope would be an instrument that I could carry in one hand and quickly set up for observing. It would also have decent optics and a stable mount.

I had been an amateur since the mid ‘80s and had always opted for large reflectors. My first scope was an 8-inch Dobsonian. I used this scope for many years, but it was fairly heavy and cumbersome to set up for just a few minutes of observing.

My first small telescope was a 3-inch Newtonian. I initially liked this scope, but later I realized that it had a poorly made mirror. Next I purchased a Celestron C90-mm Maksutov. This was the G3 configuration, and it came with a small equatorial mount and drive. The C90 had good optics, but I didn’t like the focusing mechanism which required rotation of the entire tube assembly. The scope also had been designed for 0.965-inch eyepieces, and it came with a hybrid diagonal to allow the use of 1.25-inch eyepieces. I never liked this diagonal.

My first experience with modern APO refractors occurred during the 2000 Riverside Telescope Makers Conference in California. Here I was able to observe with a TeleVue-85 refractor. I was really impressed with the sharp views through this scope, and I also liked the ability to achieve ultra-low magnifications. The C90 was unable to provide wide-field views.

After observing through the TeleVue-85, I decided that I had to get a refractor. I devoured all of the refractor reviews that I could find on the Internet. I saved money. Eventually, I found a very good opportunity to get a TeleVue Pronto.

At the time, TeleVue scopes seemed reasonably priced when compared to the competition. TeleVue also sold various well-made and affordable alt-azimuth mounts for their scopes. I obtained a TeleVue Tele-Pod mount for my Pronto.

The Pronto was a 70-mm ED refractor, essentially a well-made achromat. The views were very nice, and I used this scope often. I observed with the Pronto nearly every clear night in my backyard. Through the Pronto, I saw the phases of Mercury for the first time. I also enjoyed views of large objects such as the Andromeda Galaxy or the North American Nebula. Clusters like the Pleiades or Double Cluster were dramatic, sharp, and well defined with surrounding space. Awesome.

I used the Pronto for six years, and I later purchased a TeleVue-76. Since the Pronto wasn’t a pure APO, I felt the need to upgrade. In terms of mechanics and size, the two scopes were very similar, and the both had the same focal length and magnification suite with my eyepieces. I found that the TeleVue-76 provided significantly better high magnification views of planets.

I took the plunge and finally got a TeleVue-85, the APO refractor that I really needed.

I have always been struck by the quality and appearance of TeleVue telescopes. From the aluminum mag wheel focusing knobs to the captive, anodized aluminum dewshield, the TeleVue-85 is classy scope. My particular instrument features an ivory tube and satin black anodized aluminum fixtures. It features the old-style tapered focuser equipped with brass a compression-ring fixture.

The scope is a bit larger than the TeleVue-76, but not enough to matter. It is very convenient to setup and use. The scope was designed to pack the maximum oomph in a small package. The tube is the same 3-inch stock as the Pronto and TeleVue-76, and it uses the same tube ring. This is a good design because it reduces the overall weight of the scope. The objective lens cell tapers out to compensate for the larger aperture. The scope has a decidedly masculine appearance which is further augmented by its robust construction.

The TeleVue-85 is a doublet of 600mm focal length. The objective lens coatings make the optics appear nearly invisible when viewed from the front. The inside of the tube is covered in a black matte material to suppress glare.

I use the TeleVue-85 with my TeleVue Tele-Pod alt-azimuth mount. The scope attaches to the Tele-Pod cradle using two threaded rods. With the bat-wing release on the scope’s tube ring, it is easy to slide the tube in order to achieve balance.

The extra weight of the TeleVue-85 became a burden for my Tele-Pod mount. The tripod was at fault, so I upgraded to a Bogen 3046 that I purchased through Anacortes. This tripod with the Tele-Pod head is very solid mount, yet still portable and easy to assemble. I recommend it highly to anyone wishing to upgrade their Tele-Pod.

For tracking, I also use the TeleVue-85 with a standard Vixen-clone CG5 equatorial mount. This mount features the newer tripod with tubular steel legs, and it is very stable with a small refractor like the TeleVue-85.

The TeleVue-85 works well at ultra-low to high magnifications. For low powers, a 35mm Panoptic provides 17x and a nearly 4-degree field of view. This eyepiece is perfect for sweeping large areas of Milky Way. In a 1.25-inch format, a 24mm Panoptic delivers 25x and a 2.72-degree field, and I also enjoy medium powers with a 13mm Nagler (46x) and a 7mm Nagler (86x). The 7mm Nagler is a particularly sharp eyepiece, and I enjoy its views of planets. The 3-6mm Nagler Zoom seems almost tailor-made for the TeleVue-85. At each of its click-stops, its magnifications range from exactly 100 to 120 to 150 to 200x. The Zoom is a very convenient eyepiece that can replace an entire suite of high magnification eyepieces. I also enjoy high magnification views using a 4mm Radian (150x).


Observing with the TeleVue-85

I purchased my TeleVue-85 in the late winter of 2007. It has become my most used telescope. The views through the TeleVue-85 are outstanding. I was surprised at the amount of improvement in the views over my previous TeleVue-76. The extra bit of aperture makes quite a difference.

How APO-like is the TeleVue-85? I have occasionally seen a slight bit of purple around the disk of Venus, yet I can discern absolutely no false color on the bright lunar limb at 150x. I have never seen any telescope-derived false color when observing Jupiter and Saturn.

Saturn was been prominent during the winter and spring of 2007, and I have experienced some outstanding views of the Lord of the Rings. In the TeleVue-85, Saturn is a yellow, impossibly perfect orb. The scope will show banding on Saturn’s disk, the Cassini division in the rings, the shadow of the rings on Saturn’s disk, and the shadow of the disk itself on the rings. The usual retinue of satellites is apparent.

As of this writing, Jupiter is positioned at the low end of the ecliptic in Scorpius and follows a low arc across the southern sky each evening. Despite its low declination, I have obtained some very nice views of Jupiter with the TeleVue-85. With good seeing, the equatorial region of Jupiter coagulates into a turbulent mass of streaks and festoons. I can routinely spot seven distinct belts. The Great Red Spot can be readily seen. Due to its current low altitude, Jupiter usually shows atmospheric diffraction—the bottom of the planet is slightly orange when compared to the top. With an APO refractor, you can discern true colors and the effects of our atmosphere.

The moon and sun are fantastic to observe in the TeleVue-85. The cratered expanse of our satellite reveals a myriad of details. For solar observing with a white light solar filter, all major solar phenomena such as granulation, limb darkening, and plage are visible. Sunspots reveal delicate detail in the refractor.

When deep sky observing, the TeleVue-85 presents a picture window-like view of large expanses of the heavens. Deep sky objects can be viewed in their natural surroundings and then magnified to taste. When equipped with a nebula filter, the scope presents wonderful views of large nebulas such as the North American, both segments of the Veil, and the Lagoon and Trifid together in the same field.

Large galaxies such as M31 and M33 are the natural quarry for this scope. With low magnification, most of the Andromeda Galaxy is visible in one eyepiece field along with its two companions M32 and M110. The scope will also reveal smaller deep sky objects. All of the Messier and brighter NGC and IC objects are observable with the TeleVue-85.

Double stars are very pretty in the TeleVue-85. The Dawes limit for this scope is 1.4 arc seconds. I have been able to split challenging doubles such as Theta Aurigae, Delta Cygni, and Antares in the TeleVue-85. One advantage with an APO is that stars present their natural colors, so color-contrasting double stars display their correct appearance.

The TeleVue-85 is the perfect companion to a larger aperture telescope such as a Schmidt-Cassegrain or Newtonian. In contrast to these types of scopes, the refractor provides a different perspective on celestial objects with its bright, wide fields of view. One can obtain views approaching those of binoculars.

The August 2007 total lunar eclipse occurred on a Tuesday morning here in the Midwest, and I was anxious to observe the eclipsed moon in the TeleVue-85. Geographically, we were able to have a good view of the beginning of the eclipse and well into totality before moonset. I decided to get up an hour earlier than usual to observe the eclipse before going to work. As I set up the TeleVue-85 on its mount, I noticed that a small notch had appeared along the upper left edge of the lunar disk. Through the TeleVue-85 I watched as the earth’s shadow gradually covered the moon producing impossible “phases.” The earth’s inner shadow or umbra appeared as a dark brownish red, and it was fascinating to watch the shadow’s real time progress as it enveloped lunar surface features.

Past totality, the moon began to sink too low in the southwest to be visible from my backyard. Being easily portable, I picked up the TeleVue-85 and mount and moved to my front yard where I could observe for a few more minutes. The TeleVue-85 was the perfect scope for this eclipse. Its low power field displayed the eclipsed moon suspended against a star field in Taurus. Its ease of setup and portability were ideal for my quick work-week morning observing session.

The TeleVue-85 is an ideal small telescope. It will reveal all of the major phenomena of the heavens, from high magnification views of planets to low power Milky Way starfields. As with any small APO, the TeleVue-85 makes a perfect quick-look telescope and companion to a larger instrument. It is easy to set up and observe with. Along with being a perfect small telescope, the TeleVue-85 possesses an aura of artistic design that instills pride of ownership. Such an instrument will be a life-long companion in exploring the universe.