The New StellarVue 102 ED: A Lotta Bang and Bling for the Buck 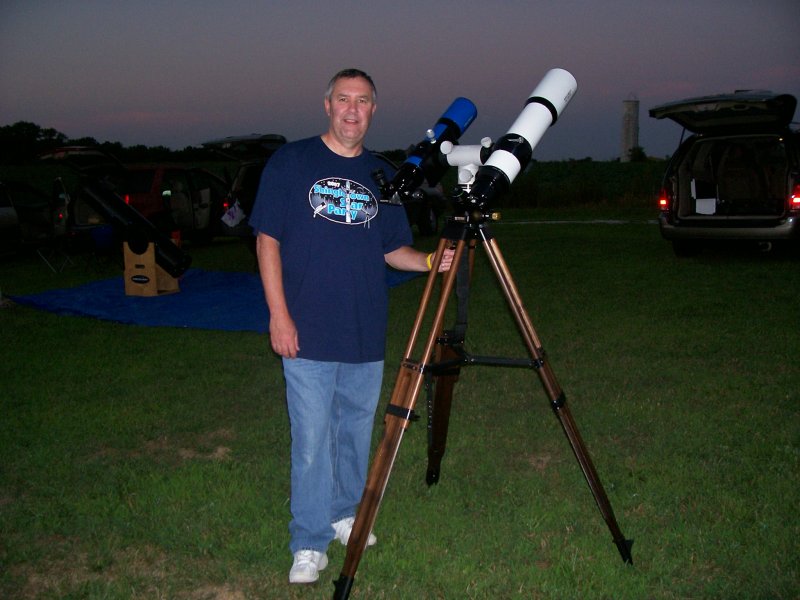 I got out my credit card, and within a few weeks FedEx delivered the new SV102ED to my house.

It’s a doublet, and it uses ED glass. So is it an APO??? Well, I don’t know. SV does not call it an APO. But other brands label their ED doublets APO’s. If an APO is supposed to be color free, then on what I observed it was most definitely color-free and an APO. But then again, most of my observing is done visually on DSO objects. I’d have to defer to someone doing imaging or concentrating on bright planets to render an APO/no APO verdict.

For me, it was the perfect visual scope at the 4 inch aperture size. Easily portable and worked well on a William Optics EZ Touch mount. Damping time was 0 because there were no vibrations.

I originally received it with the stock two-speed Crayford focuser. It was adequate but was somewhat rough and introduced vibrations that were especially evident at higher magnifications. The FeatherTouch option is the best choice; after my first night in the field I ordered the FeatherTouch, and by the next weekend I was able to do fine focus with a 5mm ep with virtually no vibrations.

I also opted to purchase the case with the scope. The case is adequate, but unlike some competitor’s products it does not have any cut-outs for eyepieces or other equipment. You’ll still need a separate accessory case.

The scope is solidly made, and surprisingly heavier than I anticipated. The clamshell supplied with the scope is very high quality, and the SV red dot finder base fits it perfectly.

Now, I am not an arm chair optician, nor am I a theoretical physicists – I am just a guy who likes to be out under the stars observing faint fuzzies. I don’t even do much on planets – DSO’s are my main interest, and in particular globular clusters. So my main focus is on what I can see in the scope.

What did I see? Well here are my observing notes:

All observing was done with a 2" TV Everbrite diagonal. EP's used were all 1.25" and included a TV 32mm plossl, TV 20mm plossl, UO 16mm Konig, UO 12.5mm ortho, and UO 7mm ortho. This is a rather inexpensive set of very good ep's. The ep used the most was the UO 16mm Konig. The least used was the TV 20mm plossl. I think this set of ep's was just about right for the DSO observing I did with this 4 inch refractor.

On the first night after installing the Feather Touch focuser, the Clear Sky Clock was indicating clear skies and average seeing and transparency. Well, at 9:30 it was raining. But I kept the faith. At 10pm it was still cloudy. Hmm....so I drove over to the local sports bar and had a beer/listened to some awful Karaoke. Killed 45 minutes. I drove back to our club's dark site and clouds were gone.

I spent most of the night over in Sagittarius and Scorpio - so much time that at 2am I still had not checked out the Double Cluster or M31. That's OK - by then they were in a good part of the sky and up high out of the muck. All objects listed were observable. Images were large. You could do more than just see them - you could observe most of them and note details and subtle nuances. Except for globulars. But, we’ll get to those later.

What impressed me most about these objects and what I saw with the SV102ED was how bright they were. In a couple instances I thought the views were the best I ever had in a small refractor I personally owned. Background sky was jet black and these objects just "popped" out they were so bright. Contrast was remarkable.

So, with the SV102ED you get very bright objects and a lot of contrast on jet black
background.

Here's a partial list of what I viewed the first night:

M8 - Lagoon or Hour Glass Nebulae. This is a splendid object. It appears to be two distinct circles of nebulosity that barely touch each other. The right side is encased in what appears to be a very tight open cluster of stars. It was best viewed with the 16mm UO ortho. With an OIII filter it revealed why it's also called the Hour Glass Nebulae - the nebulosity is very bright with the filter and it takes on the shape of an hour glass. But, The SV scope rendered very wonderful views of this object even without an OIII filter. Compared to my 11" Zambuto-powered f/4.3 dob the view in the SV 102 was better without a filter - the object was brighter. But with the OIII the dob was clearly superior - what you'd expect with that much aperture. Still, I'd rank the Lagoon as one of the best objects I viewed in the SV scope, along with M31 and the Double Cluster.

M17 - Swan Nebulae. At first I thought I had a galaxy in the fov. It's elongated, sorta cigar shaped or a floating bar. But it's a nebulae. It's very bright. The OIII filter did not add much to the view - it was best viewed without the filter and in the 16mm UO Konig. The left side had a little bulge on the bottom. It was a real treasure. But - no matter how hard we tried - it DID NOT look like the textbook swan image. The 11" dob was much superior - showing the swan image even with a 32mm plossl.

M20 and M21 - Trifid Nebulae and an open cluster. These objects were
disappointing. You can get M20 and M21 in same FOV. I kept trying to get more out of the Trifid but never did. The views were unremarkable.


M22 - Great Sagittarius Globular Cluster. Very defined large and bright globular in the SV102ED. In the 7mm it took up about 1/3 of the center of the fov. It was very bright and took magnification well. But – and here’s where a 4 inch refractor starts to show that it’s still a small observing instrument- it was just a big bright fuzzball - you could not discern many individual stars. I think that's where any 4" refractor loses out in aperture - on globulars. You can't bust 'em open with only 4" of glass. You can't really observe them. You can see them but not observe and study 'em.

Double Cluster - I wrote in my notes while observing "The Double Cluster alone is worth the price of the SV102ED". Best viewed with the TV 32mm plossl or 16mm Konig. It was breathtaking. The sky in that area was very dark at around 2:30 am and it was rather high in the sky - making the crowded field of stars very contrasty. A beautiful site to behold. I'm usually not much into open clusters - but this one is unbelievable. If this had been a star party, the Double Cluster would have been the best object to show the public in the SV102ED.

M31 - Andromeda Galaxy. Viewed around 3am when it was high in sky. This was a very impressive object in the SV102ED. Usually I'm a little disappointed
because I always wish it could be brighter. But - what was so impressive in the SV102ED was the overall brightness. And the core was super-bright. It was best in the 32mm and 20mm TV plossls, and was also good in the 16mm UO Konig. This was one of the finest objects viewed all night !! The view compared quite favorable to the 11" dob and you'd be very satisfied with the SV102 views of M31.

M55 - Spectre Globular Cluster. I didn't originally have this on my observing list for the night, but just ran across it as I was scanning areas around Sagittarius (which was a fun endeavor in this scope). An unexpected treat. This was one of the finest globulars in this 4" telescope. It is not a tightly packed globular. I think the ability of the SV012ED to render pinpoint stars is most demonstrated on this object. It took magnification well and was "Mag"nificant in the UO 12.5 and 7mm
orthos. I thought it was a better and more spectacular object than M22. A good target for the SV102ED, although again aperture blows it way.

My conclusion: the SV102ED gets the absolute most out of 4" of doublet aperture you can get for the price, and is a scope you can happily cruise the Milky Way with. If ya wanna bust globulars you'll be disappointed, but on most nebulae and objects like M31 (well, maybe there's no other object like M31 !!) it is a great scope.

We went back out the next night for more observing:

M28 - Globular in Sagittarius near M22. Similar to M4 in size and brightness.

M81 and M82. Galaxies. Easy to find in the SV 102ED. Best viewed in my 16mm UO ortho. I honestly felt another brand of 102mm scope at longer f/l rendered a better/more observable image of these 2 objects, based on some of my older observing notes with another instrument.

M13 - Globular in Hercules. By this time (after 2am) I was tired, so I really didn't take time to observe it. My notes from previous night say I could barely discern those spiral arm structures unique to this globular. I walked over to another guy's 6" SCT and saw a much better image. But I was just too tired to try different ep's and seriously observe in the SV 102ED, so I went on to another object.

M92 - another Globular in Hercules. It had a very bright core but was hard to observe and resolve stars.

M51 - Whirlpool Galaxy. The arms were not observable.

By 3am I was tired, and I just wanted to pack up/sit down, just watch the stars drift by, catch a meteor or 2, and eat some fried chicken and drink a Coke.

I went back and looked at several other globulars, as well
as my notes on them from prior observing sessions. I looked
again at each globular (a few in Sagittarius, as well as M92 and M13). I logged and reviewed my notes at the same time. Pretty much same results. In the end - I am underwhelmed with globulars in this scope. It' s all about the aperture, and you have to understand there are limits to what a 4" scope can do - even those manufactured by Vic.

So, if you understand what you can and can't do with a 4" scope, then with the SV102ED you can A LOT and at a lower price than many of the other comparable scopes. It's build quality is flawless, and all are tested by SV under the nite skies before being shipped - QC at SV is very high.

I highly recommend this scope, although in the end I sold it and stayed with a large dob – on faint fuzzies you still can’t beat a big light bucket.