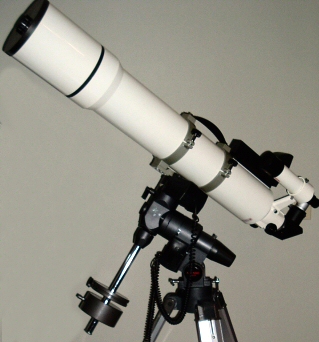 It is truly sad that Vixen has elected not to sell this telescope in the US market. There really isn’t anything else like it around. This is a 4 element achromat, with well controlled (but by no means invisible) secondary color.

An achromat, you say? Why, who in their right mind would want an achromat this expensive? Well, I for one have owned two of these. I sold the first one, even though I said I wouldn’t, and when I realized the stupidity of my mistake, I scoured the internet to buy another one. Others have since contacted me to ask where I found mine, or to alert me to contact them if I ever sell this one.

So, why is this an appealing telescope? It is a good quality 5.5”, f/5.7 refractor. That comes out to 800mm of focal length. This makes it only 320mm longer focal length than an 80mm f/6 scope, but offers over three times the light gathering. Physically, it is no longer than my 100mm f/10 Vixen refractor and only weighs a bit more (some of this weight difference is attributable to the fact that the 102mm scope only accepts 1.25’ eyepieces). So in a similar size package, I get almost twice the light as a 4” scope would, and a wider field of view to boot! I no longer use my 4” scope because it takes an identical effort to use it, and the 140mm scope shows SOOO much more.

Because of the design (a four element Petzval arrangement), the field is supposedly flatter than a regular doublet lens would be, but I am not an astro-photographer, so I do not exploit this quality. When using wide-field eyepieces however, I find edge of field performance to be very good, and perhaps this design contributes to the viewing experience. This design is supposed to suppress secondary color, and I would say that it does this successfully given the fact that at 5.5” and f/ 5.7. A doublet of this size and speed would probably be horrible on even moderately bright objects at high magnification. This scope does well with CA, showing only modest amounts on Jupiter, the moon, and brighter stars. Everywhere else, CA is practically invisible.

Optically, this example is not quite as good as my first one (an anal kind of sadness has just washed over me). This one has an in-focus airy disk pattern that is consistent with maybe a 1/5th wave spherical correction error. The optics are otherwise smooth and free of fatal defects. The first one I owned had a slightly dimmer first diffraction ring. But even fairly bright stars don’t show a second diffraction ring, and knowing that the difference here is really very little, I am still thrilled with the second scope. For wide-field, clusters, doubles, and nebula, it is the same in performance as the first one. This kind of correction difference is only detectable on a very, very few objects, and of course on ANY star by virtue of the slightly brighter first ring. It is still dimmer than the first ring on the 5” compound scopes I have owned, and airy-disks maintain their appearance better when seeing conditions are less than good. The Cats give it up earlier, or to less turbulence, and of course they are challenged to generate a 2” field.

So why do I dote over this scope? Try this: Almost 3 degrees at 23x of refractor-quality wide-field nirvana, (for a 6mm exit pupil, which is probably all I can generate) and still capable of dealing out clean high-power splits, and all in a package that is so manageable that it compares well to just about anything smaller at any price. In almost every other category in the telescope market, there are many competitive scopes available. To my knowledge, this is one of the few 5.5” refractors you can buy. TEC 140s are going to be MUCH better on planets and the moon (but at twice the price) and I doubt that anyone that has a Televue 140 is going to sell theirs anytime soon. But because to me, the real differences are only going to show on a couple of objects, The 140 belongs in this pack because it is more like the others than it is different. Some may argue, but that is my opinion. The only other scopes that fit here are the exquisite MN61s, and if I had not been able to find another 140, this would have been where I went for this kind of instrument (though I prefer the refractor seating position, and the MN61 would have been too much for the LXD55 mount).


When compared to my 4” refractor, the difference is quite pronounced in terms of performance. A great number of clusters start to resolve at 5.5” that are only hinted at in a 4” aperture (again, this scope has almost twice the light gathering). Far more doubles open up at this aperture, both because of resolution, and because of the ability to root out much fainter secondary stars.

On big objects, such as M42, the nebulosity spreads further, and with the wide field capability, more of the surrounding area can be used to frame the nebula. The Sagittarius star cloud looks pale in my 4” refractor, but it is beautifully framed in the 5.5” and stands out prominently from the Milky Way background.

This is not the best scope for planetary and lunar use. The less than perfect spherical aberration on my second example robs some contrast, and the chromatic coloring robs a bit more, so that I can say that it is only somewhat better in this regard than my 4” achromat (which is optically nearer to perfect, and shows almost no color). The first sample I owned was better, comparing reasonably with an older MN61 without advanced coatings.

Doubles are great though, and in every other way than on the big planets, the 140 delivers correspondingly better performance than my 4” scope, and makes the 80mm scope a non-starter. 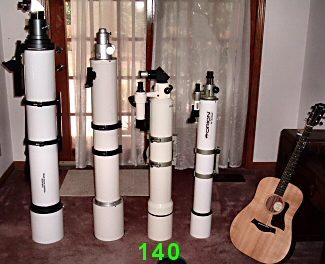 I mounted this OTA on a Meade LXD55 mount, and this has produced a telescope that is really “Fun” to use. The original legs were replaced with a set of Vixen HAL 110 tripod legs, and this has made a noticeable difference in stability. I had my first Vixen 140 on a Losmandy GM8, but the HAL 110 legs make this mount far more acceptable so the GM8 isn’t needed anymore, and this makes the whole combination more manageable… AND WITH GO-TO!!!! How totally Cool! It is quite amusing to see this combination perform a little ballet-like motion to seek another target. The whole thing goes from set-up inside to set-up outside in 5 minutes. Inside, I drop the OTA from the mount. Because the mount doesn’t require much counterweight, I can carry the whole mount out in one trip. Back to the house for the OTA, and I am set up. Alignment is quick (I don’t accurately polar align, and the 2 star alignment keeps me tracking and pointing well enough). With the laptop hooked to the drive, I have “Discovered” many new clusters. What this means is that using the Hubble Guide Star Catalog and the Meade LPI Autostar Suite, I have found clumps of stars that aren’t actually cataloged, but in fact present pleasing, cluster-like views. Often, these are large areas of the sky, and one can only perform this “Trick” if you have a relatively big aperture telescope with a large field of view. I have done this with my 80mm f/6 refractor, but the 140mm aperture starts to poke out lots more opportunities because of its far larger aperture.

OK, these were expensive scopes when they were sold new, and given today’s Vixen pricing, it might be a very questionable proposition if they were to re-introduce this telescope to this market for a price in excess of $2000. But at $1900 (the going used price – IF IF IF you can find one that someone is willing to sell), I consider this very unique instrument to be in a niche, making the price reasonable for the rare combination of attributes offered.

Click here for more about the Vixen line of refractors. -Ed.
Comments (0)