A Checklist for Photographing the Transit of Venus 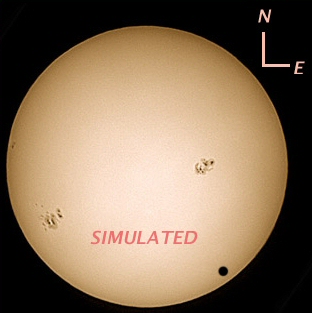 [ARTICLEIMGL="1"]On the morning of June 8th, you may be one of the first people in history
to take a digital image, or even a good photograph, of a transit of Venus.
For the first time since 1882, Venus will pass in front of the Sun as seen
from Earth.

In the eastern United States, Venus will be about to leave the Sun's face at sunrise.
(The West won't see the event at all.)
Venus will reach the edge of the visible Sun about 7:05 a.m. Eastern Daylight Time
and will be completely off it by 7:25, give or take two or three minutes
depending on location.

The picture shows what to expect. I faked it by using Photoshop to alter one of my
existing sunspot pictures. As you can see, Venus in transit looks much larger than Mercury.
In fact, with a suitable sun filter, you'll probably be able to see it without
a telescope.

Are you ready to photograph or image the transit of Venus? Here's a checklist of
things to consider.

(1) How well can you photograph the Moon?

The Sun and Moon appear the same
size in the sky, so the Moon is a good object to practice on.
Possible techniques include:

A 35-mm camera body, without lens, at the
focus of a telescope whose focal length is about 600 to 2000 mm
(most portable amateur telescopes are in this range, but some Newtonians
won't reach focus because they don't accommodate the depth of the camera body);

A digital camera or video camera
aimed into the eyepiece of a telescope with a magnification of
about 30 to 70 (this is called afocal coupling and the camera must
be focused to infinity, autofocus off, flash off);

A modified webcam or a Meade Lunar-Planetary Imager at the focus of a telescope
(in this case, only the smallest telescopes will cover the full face of the
Moon or Sun, but that's probably okay).

(2) How do you control vibration?

Digital cameras, webcams, and the Meade Lunar-Planetary Imager
have a real advantage because
they don't have a mirror to introduce vibration.
With SLR cameras, experiment. Often, at higher shutter speeds,
such as 1/250 second, vibration isn't much of a problem.

(3) Do you have a suitable solar filter?

The filter must go in front of the telescope and be made of aluminized optical glass
or aluminized Mylar (not stretched too tight). Bear in mind that the Sun will be low
in the sky, and your usual filter may be too dense. If you can separate the
two layers of a Mylar filter, be prepared to do so.

If you prefer optical glass, you might want to invest in a "light" sun filter
(density about 4.0 instead of the usual 5.0), which transmits 10 times as much light
but is still safe to use.

(4) How well can you photograph the Sun?

You can practice photographing the Sun with sunspots every day.
Note that if you are using afocal coupling, you'll need to make sure stray light
is excluded; some camera-to-eyepiece adapters are designed only for use in the dark.
Draping a strip of black cloth around the connection is the cure for light leaks.

(5) Is the transit going to be visible at your location?

I don't just mean your part of the country, but your exact site, because the Sun
will be very low in the sky, and trees may interfere.
To be certain, practice the day before.

(6)How are you going to process the images?

I often use Registax to sharpen my images.
But in lunar and solar work, it's not practical to stack a series of images the way we do when photographing planets.
The reason? Air turbulence affects different parts of the image differently at any given moment, and when you're covering a wide field (even 1/10 of the face of the Moon), successive images don't stack very well. It's better to pick the one sharpest image and process it with unsharp masking or wavelet transforms.

(7) When you get your picture, what are you going to do with it?

E-mailing an image to your local newspaper - while it's still hot news - is often very
much appreciated, and it's a great way to promote astronomy in your town.
Comments (0)