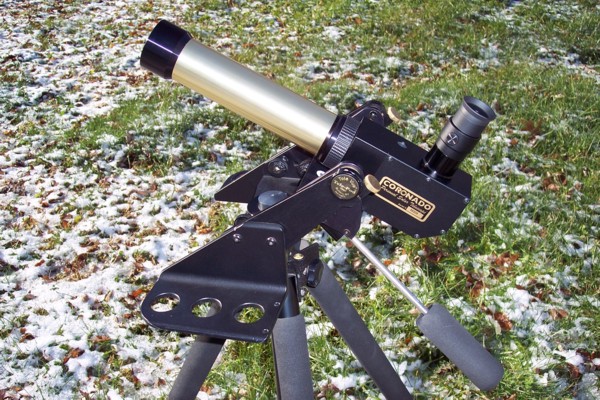 Despite increasing light pollution, today’s amateur astronomers are living in a golden age of telescope products.

For example, well-made telescopes are available at a reasonable price. The Chinese-made Dobsonian telescopes, such as the Orion XT series, represent amazing value and quality for the price paid.

Apochromatic refractors, once the province of an elite few, are now readily available at affordable prices. These telescopes provide delightfully crisp, false-color free views of the planets, stars, and deep sky objects.

Digital imaging, in the form of standard digital cameras and ready-made astro cameras such as the Meade DSI, provide an easy way of obtaining amazing photographs that best what professional observatories were able to produce just a few years ago.

Goto technology provides the ability to locate virtually any celestial object available with respect to telescope aperture and observing conditions. Technological marvels such as the Meade LX200 telescope series have opened the door for more people to enter astronomy as a hobby, and they also provide ease and convenience to experienced amateurs who have paid their star-hopping dues.

The Internet itself has allowed the hobby to flourish in unprecedented ways. Web sites such as Astromart, Cloudy Nights, and the various astronomy Yahoo! Groups allow communication, commerce, exchange of information, and the ability to learn about the fascinating world of astronomy while participating in the communal efforts of like-minded enthusiasts.

As fun as all of the above are, there is one new product in particular that has fulfilled a unique niche in the observing community, and this is the Coronado Personal Solar Telescope (PST). Despite some problems with “rusty lenses”, the PST has been a success. I believe that the PST is the greatest innovation to enter amateur astronomy since the advent of the Dobsonian telescope.

The Coronado PST is a small refracting telescope that allows observation of the sun in the light of hydrogen-alpha. At $500, the PST makes h-alpha astronomy available to regular people lacking the ability or desire to spend thousands of dollars on a niche item. The PST enables observation of the chromosphere, the red atmospheric layer just above the photosphere. The photosphere is the sun’s apparent “surface” that is visible with traditional white-light filters. H-alpha light provides views of solar phenomena such as prominences, filaments, active regions, spicules, and flares.

This robust scope is made entirely of metal. It is eccentric looking with its boxy rear end, yet the brass-anodized tube is attractive.

The PST is portable and easy to operate. I use mine with a TeleVue Tele-Pod altazimuth mount. One can also place the PST on a decent photo tripod. The scope has two quarter-twenty threaded holes in its base.

Despite the ubiquitous warning label, the PST is very safe because all of its filters are positioned inside the telescope. To find the sun, aim the scope until the sun’s image appears centered in the Sol Ranger, a round frosted window on top of the scope. The PST is pretty much idiot proof. 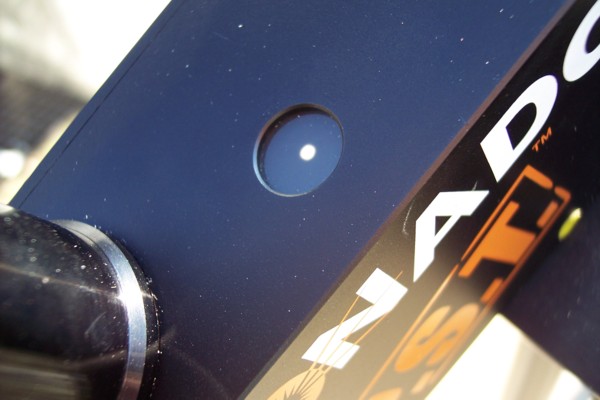 The PST features a tuning ring located at the junction of the anodized tube and boxy rear end. Rotating the tuner allows different detail to emerge and the ability to fine tune the best view. The tuner also can be rotated to obtain a red disk similar to a “white-light” view.

The focus knob is a small aluminum knob placed at the rear of the scope. The focuser’s action is smooth and precise, and its range accommodates all of the eyepieces that I have attempted to use in the scope.

I tend to prefer simple eyepieces with the PST. The views through a wide field eyepiece like the 13mm Nagler seem dim, and the large viewing lens is harder to shield from the extraneous light of a daytime environment. In this regard, I find “peephole” eyepieces such as the supplied 12mm Kellner to work better with the scope. I also use a 9.5mm Meade Series 3000 plossl, and this eyepiece produces sharp, nearly glare free views at 42x.

My scope does present some ghost images. For example, the scope displays two small overlapping disks of light near the bottom left quadrant of the eyepiece field. Some eyepieces also produce more glare than others. The scope’s 12mm Kellner does pretty well, yet my 15mm TeleVue plossl is particularly glary and I don’t enjoy using it in the PST. I would like to obtain some of Coronado’s Cemax eyepieces that are designed for h-alpha observing.

My PST provides nice sharp views. With good observing conditions, I can see the chromosphere as a spiky fringe along the edge of the solar disk, and I can also see surface details such as filaments. Prominences appear as phantasmagoric shapes suspended against the black of space. When visible, flares resemble bright white patches superimposed on the chromosphere. These are truly remarkable sights.

Many owners of the initial PSTs have experienced the rusty lens problem. My scope had it also.

The PST uses a cemented doublet achromatic lens assembly for its objective. Initially my scope’s objective was opaque and had silver coatings. A few months after purchase, I noticed that, when pointed towards the sun, the objective displayed a dusty yellow patina that appeared to be positioned between the two objective lenses. It looked as though yellow dust had infiltrated the space between the lenses. Despite this, the views of the sun through the scope seemed unaffected.

As I later found out, problems in the manufacturing process resulted in the lenses separating. The “dust” represented detached portions of the cement used to bind the doublet together.

Luckily Coronado/Meade is fixing the lenses under warranty. Russ at Coronado helped me get my objective lens replaced. It took about one month to get the scope after I shipped it.

The pretty new lens has deep blue coatings. Unlike the old lens, the coatings are not opaque and the inside of the tube is visible. The views are the equivalent to those provided by the old lens. My PST always displayed a lot of surface detail, and this aspect of the scope remained unchanged. 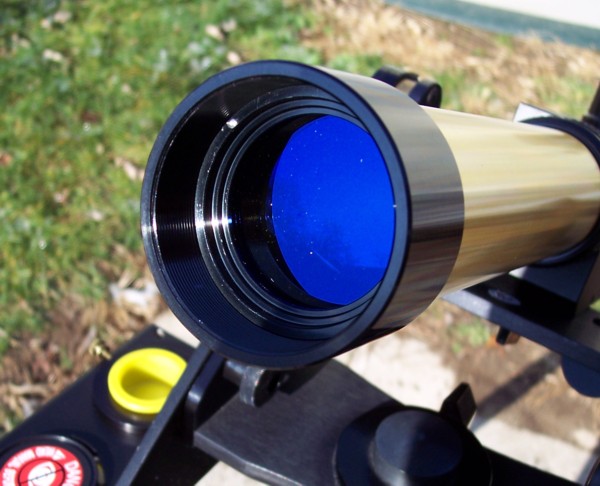 The repair improved my tuning ring. Initially, the tuning ring provided the best views when turned entirely to the end of its travel distance. The new tuner is noticeably smoother in action, and I can rotate it beyond the position of best h-alpha detail and thereby experience more precise tuning ability.

I am very happy that I took the initiative to get my rusty lens replaced. I was very reluctant to send the scope away, but it worked out well.

Owning the PST has made me feel like an active participant in solar astronomy. Granted, I am not a professional astronomer, and I likely won’t discover anything new. Yet owning the PST allows me to follow events on the sun in a unique way.

No other celestial object exhibits the capacity for rapid change like the sun does. The PST enables observation of solar transient phenomena such as active regions, flares, sunspots, and prominences. The sun’s appearance also changes as it rotates. New active regions and sunspots appear, drift across, and disappear within a few days. These active regions may spawn flares that cause disruptions on earth and aurora displays. The PST allows a front row seat for all of this action.

For me, solar observing is the astronomical equivalent of sports. Sports are dynamic, “live,” and unpredictable. Sports fans follow their favorite teams throughout their respective seasons. They study the individual statistics of team and players. In a similar way, solar fans follow the sun’s behavior via Internet sites such as spaceweather.com.

With the PST, one can observe an active region on the sun, and later observe the nighttime auroras that it produced. I have actually done this on an evening when auroras were visible from Northern Indiana.

For $500, the PST opens up an entire new realm of observing that is filled with dynamic change. The scope allows you to observe the seething, vapor-strewn surface of our nearest star. It is very easy to wile away an afternoon with this little scope.

The Dobsonian telescope made large aperture reflectors affordable for everyone and helped open up the deep sky for observation. In a similar way, the Coronado PST makes h-alpha astronomy affordable and opens up a new realm of solar observing. The PST’s ability to reveal our nearest star makes it a uniquely innovative product, even when compared to the many other wonderful products available to today’s amateurs. 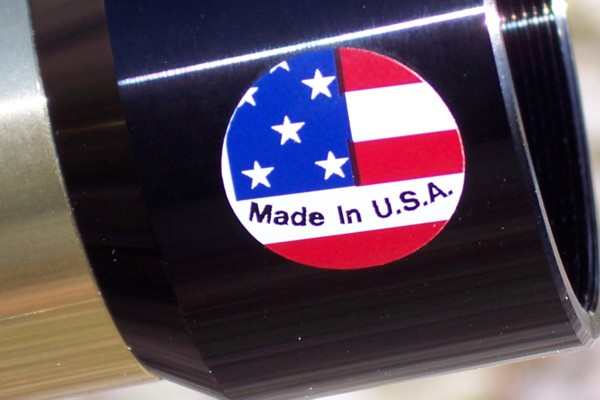