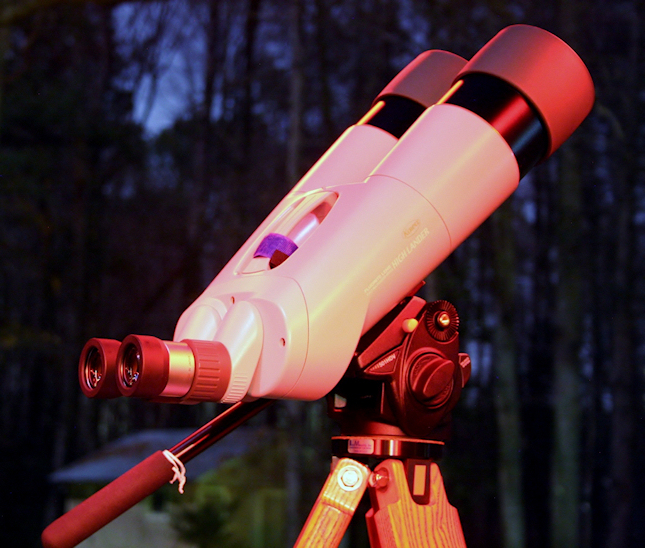 Part One - A binocular journey.

My interest in astro binocs goes back a long way. I was 12 years old when I found M34 with my father's 7x35 Sears binos. In 1997 I bought a pair of Fujinon 16x70's. I spent many nights with these on a parallelogram mount. While they are excellent binos, the mount and straight-thru design was unsatisfactory. Neck-ache! Ten years later sold them.
I tried one of those tilt-mirror bino mounts. While comfortable to use, the image was confusingly reversed. The original and the expensive upgraded mirror both induced aberrations at 16x.

In 2003 I got onto the $200 binoviewer bandwagon. Excellent with my 7" Mak on the moon. Disaster with an 80mm f/6 refractor. I wanted to scan the skies at 30x, both eyes, at a comfortable angle. Tried barlow and OCS, but none of that stuff gave me real binocular performance.

In 2008 with the Fujis gone a year I felt the binocular need again. I tried every binocular sold in town. The Swarovski 8x50 SLC were by far the best I tried, even than the Zeiss and costlier Leica models. Every time I use these, its jaw-droppingly amazing views. But again I was faced with familiar problems: straight thru viewing and mounting concerns.

In the past two years I researched large binoculars.
I always wanted a Fujinon 150, but they are large, heavy, straight-thru, and need a good mount. Not convenient to set up or portable. No bad reviews. Never seen one in person. Why dont they make a 45 degree version of the 16x70?
The Docter 80mm Aspectem look nice, but again stright-thru. Not sold by astro dealers in the US.

I looked thru two Miyauchi binoculars in the past, but was not "wow-ed" Something to do with the eye relief. The are no longer in production anyway.

I tried the JMI 10" reverse binoculars. They are excellent and delightful to view with. Love the electric focus and IPD. There is the problem of facing away from your target, high/low angle observing comfort, and lack of portability. I think they may be in my future down the road, but only with custom Zambuto or Waite mirrors.

There are the Binoscopes by Joe Castoro, but again I have never seen one. Again there is the size/weight/portability issue. Would have to be a pair of AP's, TEC's, or Taks. Nothing else.

There is very little information to be found about these. There is half a page in Starware 4 by Phil Harrington, all of it good. I think I read that page 100 times. There is the Milt Wilcox review on CloudyNights. A few scant posts here and there on various forums. Not one bad review.
What I found appealing was the compact size (compared to the Fujis), 45 degree angle, and 1.25" eyepiece holders. The 2.6mm exit pupil is a good match for my astigmatism and floaters. I ordered them from Anacortes in August of 2011. They arrived after two months of anxiety in October. I also ordered a Bogen 501HDV mount.

Mounting is a little tricky for the uninitiated. The Bogen dovetail can be attached to the bino base forwards or backwards. Forwards the balance is better, backwards the bino can tilt 90 deg to view at the zenith. I already have a Discmounts tall tripod, the Bogen head screws right on no problems. No more hand holding!

First light was Altair. No false color, no purple fringe. Sharp in the center, some distortion near the edge of the field. The field is so wide I dont see it unless I look at the edge. Lots of faint pinpoint stars. Inter-ocular distance is easy to change and each eyepiece rotates to focus. Eye placement is somewhat critical. The stars can be a little spiky with head movement or not having the eye perpendicular. I observe with my left eye and tend to put the left closer to the bino than the right. Once I got used to using both eyes and fixed the IPD just right everything went fine. 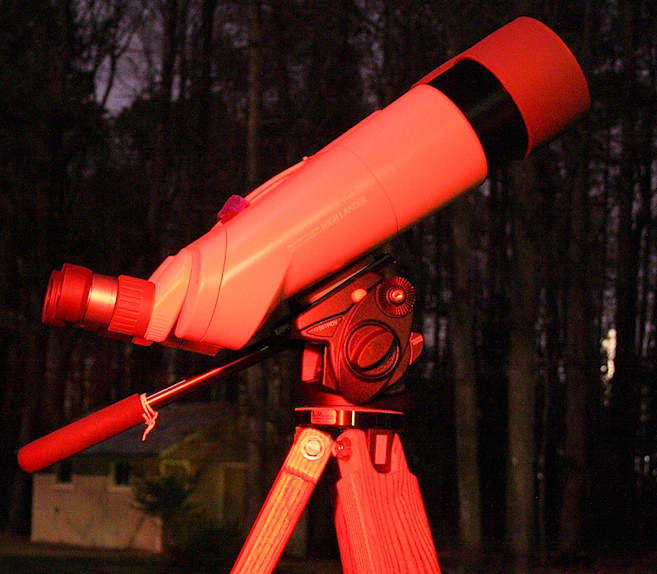 I swept the summer Milky Way for a couple of hours. Even from my city backyard with streetlights thousands of faint stars were visible. Star colors are expecially vivid. One of my first targets was IC 4756 in Serpens. It fills the 2 degree field of the binos with dozens of stars. A WOW! moment. As a larger cluster its kinda lost in a telescope. Nearby NGC 6633 is brighter and more compact and no less spectacular.

A couple of weeks later I took the Kowas over to visit Richmond's Mr. Takahashi. We looked at lots of summer stuff: M6, M7, M8, M22, M17... Mr Tak was very impressed. I already knew I had a winner, but its nice to have confirmation. He only likes good stuff.

Here are some quick views:

Horsehead: IC 434 visible at dark site. Fleeting glimpses of dark area, not 100% sure yet.

M81 and 82: nice to see both with distinct shapes.

The Highlanders are excellent for scanning the Milky Way, brighter DSO's, carbon stars, doubles, and even good on the moon. There is a thin green line on the limb of the moon when slightly out of focus. None in focus. There were some moonless nights I left the dob at home and just used the binos. My longtime favorites are wide doubles like Theta 1 and 2 Tauri, Omega 1 & 2 Scorpii, Zeta and Eta Aurigae, Iota and Kappa Oph. These are lost in the narrow field of a telescope. In the binos they show up very well and easy to see the color contrast.

Overall Im happy with the Kowas. Optics and build are excellent. Im able to point them at the zenith and view. Its not 100% comfortable but feasible for a few minutes. Impossible with straight-thru binos.

The Highlanders do have a few disadvantages.

Ordinary astronomical eyepieces wont work for astro viewing. They do work fine for terrestrial. Classic and vintage eyepiece barrels wont fit. Newer eyepieces will fit but not push in far enought for astro viewing.
Kowa proprietary eyepieces are very expensive, each the price of an Ethos. They have a special fitting that allows them to "pop" in and stay in place. 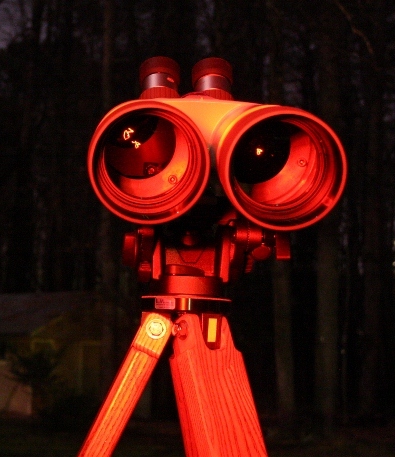 As mentioned above the stars can be a little spiky when viewing from an angle. Eye placement is critical. I think this results from the 45 degree angle. Not a problem after I became accustomed to using the binos.

The objectives and eyelenses are prone to dew. No more so than other binos and scopes, but its still a problem. I recently bought the Dew-Not heater for binoculars and binoviewers.

The Kowa Highlander mount and tripod are very expensive and unneccessary. The Bogen 501 works very well and can be used for other applications. Common tripods like the Meade LX200, Losmandy HD, or my Discmounts tripod are better choices and versatile.

The case looks nice but I think I'd rather have a Scopeguard or Pelican.

Are they worth the cost? I think so.