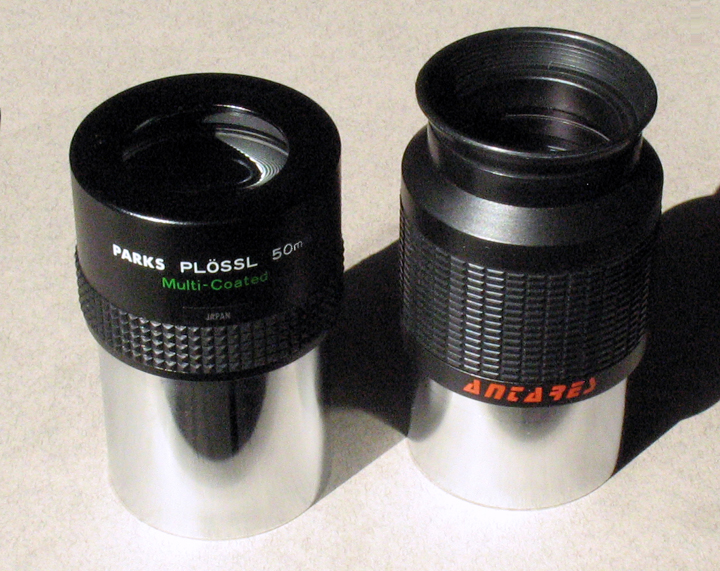 I own an Orion (Synta) 120mm ST f5 achromatic refractor that I obtained used on Astromart. It is a great grab-and-go scope, and I frequently use it at little star parties, and observers are always impressed with the views.

Some years ago I had use of a Celestron C-8 SCT with Starbright coatings. However, in the years since, I have been diagnosed with Parkinson's disease, and the C-8 became too much to carry and handle for a night's viewing.

After having the 120 ST refractor for the last year, I got "Aperture Fever" since I was not even able to see (let alone see in detail) many dimmer deep-sky objects with the refractor.

I got another used Celestron C-8 SCT, but the big problem I had forgotten with an f10 SCT is the 2000mm focal length, which is long for many deep-sky objects. I see only a few stars of Pleiades in a given field-of-view, instead of the whole cluster, for example.

The solution seemed to be to get the longest focal length ( and thus widest-angle view) eyepiece I could. A 50mm or longer eyepiece became the goal.

A check with Frank Lopez, owner of my local Tucson astronomy store, Stellar Vision, revealed that he had in stock used versions of the Antares 52mm Erfle (a wide FOV design) at $50 and a 50mm Parks Plossl made in Japan for $45. Neither eyepiece seems to be available as a current model; Parks has a new 50mm and Antares has a 40mm Erfle. Frank was willing to let me pay for one and try both for a few nights. Both the Parks and the Antares are 2" eyepieces, a reasonably compact 3.5" long, and neither is too heavy at under 1 pound. Both eyepieces have painted (probably screen-printed) lettering (rather than engraved) on their sides. The Antares has an eyecup, the Parks has none.

My test night was clear and moonless with a slight breeze. I live mid-city in Tucson, Arizona. The transparency of the sky was such that the Milky Way was not naked-eye visible at all.

Jupiter
I viewed Jupiter first with both scopes and both eyepieces, as well as other oculars. I used a William Optics 2" diagonal for both scopes. Both the Parks 50mm and the Antares 52mm produced very sharp star images right to the edge of the field on both telescopes. Jupiter was clear and sharp, with two cloud bands visible along with four jewel-like moons. In neither eyepiece were aberrations noticeable.

The Andromeda Galaxy
I switched the view to M31 and since only the galactic core was visible from my location, the biggest difference between the two scope's views was the size of the aforementioned nucleus. The refractor view was much wider, of course, but in the C-8's view, I made a quick discovery. It was M110, one of the two smaller companions of M31! I checked for it in the refractor and I could barely sense something was there, but when I switched to my 12mm eyepiece in the refractor, both M31's core and M110 were nicely there.

I spent a long time on M31 and M110, and all the time spent was enjoyable, as both the 2" oculars were very sharp and contrasty. The Antares has a little wider view too, though that didn't help or hurt anything with these objects.

Pleiades
Finally, the Pleiades came up. On the Orion 120 ST refractor, both eyepieces gave a ten-power image, allowing all the main stars in the field. I frankly liked the FOV of the 24mm for this telescope. Hints of nebulosity seemed visible.

On the C-8, nebulosity was more apparent with both the 50mm Parks and the 52mm Antares. At 40X, though, the Parks did not show all the main stars ("sisters") in one view. Neither did the Antares show as much as the refractor, but it showed significantly more than the Parks. The extra 2mm of focal length doubtless helped, but I had to credit the Erfle design.

There are still a number of 50mm eyepieces available. Takahashi, Televue, Vixen, Meade, Parks, GSO and Russell all have them, and some of these have been reviewed in Astromart.

As a disclaimer, this review states only my opinions. I have no business relationship with any of the companies mentioned.

In conclusion, I chose the Antares 52mm for its wider views and ease of use. I really wanted a Japanese version of a long focal length eyepiece, but the images won me to the Antares.