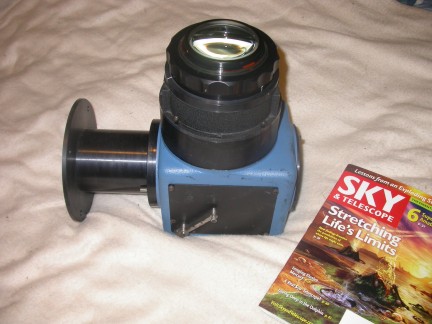 Most readers will know, that for a given focal-length eyepiece, its maximum true field, regardless of the optical design, is limited by the field-stop diameter. That’s why a TeleVue 68-degree Panoptic can’t be made any larger than 41mm in a two-inch barrel, why its cousin the 82-degree Nagler can’t be any larger than 31mm, and likewise why the new 100-degree Ethos can’t be larger than 21mm. If you manufactured any of these eyepieces in longer focal lengths, the wide “cone of viewable area” would be cut back by the field stop. (I’m using TeleVue eyepieces for examples here simply because they are well known and highly regarded). A 50mm Nagler design, for example, wouldn’t give an 82-degree field, it might be stopped down to only 60 degrees by putting the glass in front of a 2-inch barrel.

Actually, there have been 4-inch eyepieces, usually custom-built for large, professional observatory telescopes. Paul Rini has made and sold a few low-cost 4-inch eyepieces, such as the 130mm model shown in the photo below. 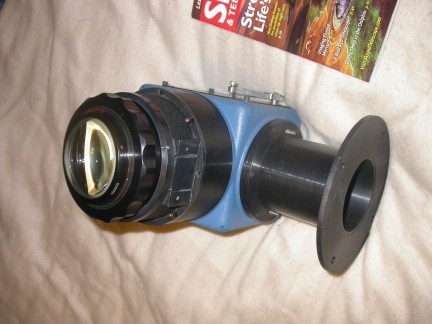 There are two drawbacks to this eyepiece: First, its 130mm focal length translates to a way-to-large exit pupil of 13mm if used with an f/10 scope, too large to fit into a human’s dark adapted eye. Second, it’s not a “wide-field” optical design. It has an apparent field of only perhaps 40 degrees. Thus even with its low magnification, it gives a rather restricted actual field of view. A shorter-focal length eyepiece of perhaps 40mm, with a wide-field design (like the Panoptic) would give a higher magnification, and a nearly similar true field. 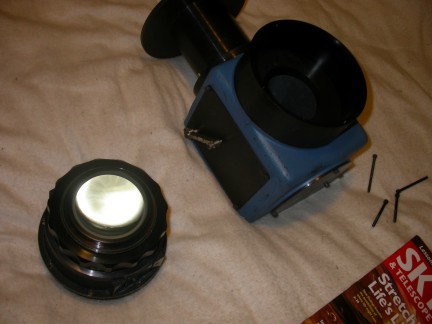 So again I ask, Why don’t manufacturers of modern eyepieces make big, wide-field designs in barrel sizes larger than 2 inches? 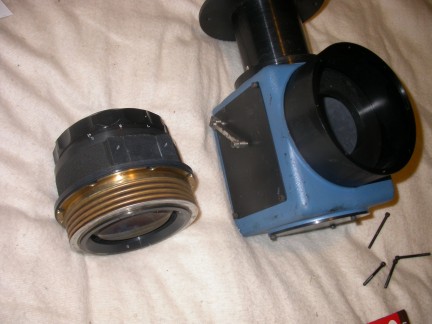 Long ago, Celestron did. Back in their glory days, when they were producing their never-to-be-equaled-since blue-and-white-tube scopes, they offered what they called the “Rich Field Viewer” as an accessory for their biggest telescopes. This enormous gadget looked like a modern flip-mirror box on steroids. It sported a huge Erfle eyepiece made by Unitron in Japan that had a 75mm focal length and a 3-inch clear aperture! The eyepiece actually had a built-in helical focusing mechanism, and the whole apparatus was designed to bolt to the rear of a C12, C16, or C22 telescope, in place of the normal rack-and-pinion focuser. 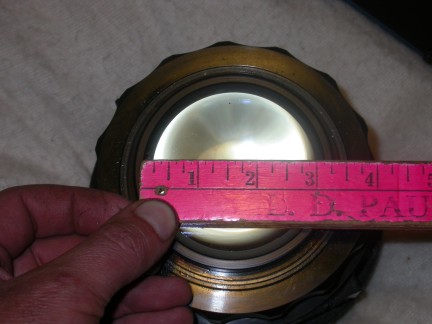 Using the Rich Field Viewer on the f/11 C16 for example, gave a magnification of 60x and a true field of 1.13 degrees! All that with an entirely usable exit pupil of 6.8mm. Now THAT’s wide-field viewing.

This enormous eyepiece/flip-mirror box combo weighed in at a hefty 18 lbs. (The eyepiece itself weighs 9 lbs.). so you needed a massive scope to handle it, but that’s what it was made for. At least one of these units was sold with a threaded adapter to allow the box to fit the rear hub of a standard orange-tube C14. 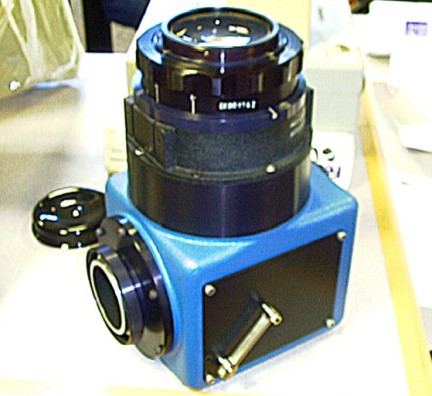 These units retailed from Celestron at $675 back in the late 1960s. Most were sold with their large telescopes, but a few were purchased separately. They are in great demand today, partially because of their rarity, and partially because they have no equal in the current market. I recently purchased one from a former Celestron employee who bought possibly the very last one ever made by the company.

How does it perform? Absolutely incredible! 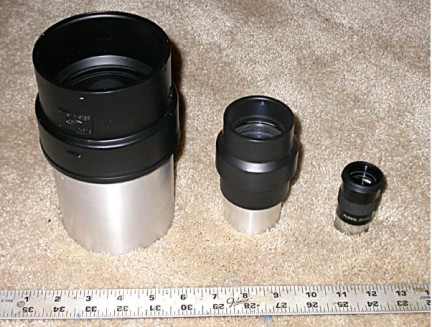 The Celestron Rich Field Viewer has a 3-inch format. Thus at similar magnifications it can provide fields of view 1.5x larger than any other eyepiece available today. That’s a larger difference than the comparison between an Ethos and a Nagler, for example. Again, with an exit pupil that will put all of the light into a healthy, dark-adapted eye.

With this eyepiece it becomes possible to see images that were previously impossible with a large, high-f-ratio telescope. Large sections of the Veil nebula. A big section of M31, not just the core. Planetary conjunctions. Both components of the Double Cluster, with room to spare. M81 and M82, again with room to spare. The outer areas of M42, along with M43, in the same field. Galaxy clusters in Virgo or Coma Berenieces are staggering.

The eye relief on this Erfle is also amazing. I would estimate it at 70-75mm. True, there is a tiny bit of flaring at the extreme edge of the field, but that’s what you get with an Erfle, and at f/10 or f/11 it’s not that objectionable.

I tried the RFV on my C22, which runs at f10, and the results are equally impressive. Views that I thought would be impossible are now easily within reach, and let me know that one of these units should perform splendidly on a modern R-C of similar or larger aperture.

Anyone who has read my ebook “Celestron The Early Years” has seen the big RFV well-documented in there. Ambitious ATMs who are interested in designing their own eyepieces should consider making them in barrel sizes of perhaps 2.7 or larger sizes, depending on their scopes. If there are any commercial eyepiece manufacturers reading this, perhaps it will inspire them to do the same. The rest of you with large scopes might want to scour the neighborhood for any and all Celestron Rich Field Viewers. They, like the truth, are out there.

NOTE: Ethos, Nagler, and Panoptic are registered trademarks of TeleVue Inc. This review is not intended to infringe on any manufacturer’s designs.
Bob Piekiel