Hunting and Following Asteroids Via the Internet 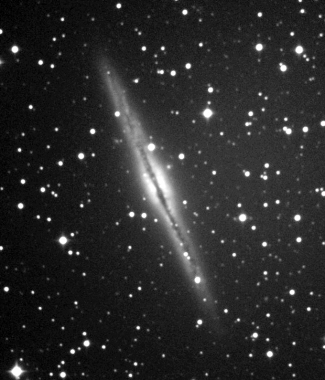 [ARTICLEIMGL="1"]It was in my 10th year when I read my first book about astronomy: 'Le ciel' (the Sky) by French astronomer Lucien Rudaux... a splendid but rare work. My oldest memory of one beautiful celestial spectacle goes back to 1956 with the Arend-Roland comet discovered by our astronomers Arend and Roland of Uccle Observatory here in Brussels and also a beautiful vision of the Andromeda Galaxy as seen through a small instrument that I built myself with optics of glass!!! It is true that then I lived in the countryside with splendid skies and a less light polluted area than at present.

I lived in a boarding school for several years and I remember that the director did not seem too glad to find me observing an eclipse of the moon at 2 AM but I finally persuaded him to observe with me!

During my studies I was particularly interested in science; particularly chemistry and physics. My true passion 'astronomy' began in 1970 with the vision (by chance) of Saturn in small 50mm binoculars…seeing this planet was a revelation to me.

After marrying my second wife, Nicole, I immersed myself in learning about manufacturing parabolic mirrors. I made (among 17 mirrors in a range of 100 to 305mm) an instrument of 200mm with which I visually observed many galaxies. This was accomplished after studying the splendid work of Jean Texereau, In 1983 an asteroid passed through the field of NGC 2903... I had taken it for a supernova!!! Mr. B. Marsden kindly clarified for me that it was asteroid (139) Juewa...this sparked my interest for these ‘minor’ objects.

After this event I studied asteroids and orbits more seriously. Articles written by Roger W Sinnot and Dennis di Cicco in ‘Sky and Telescope’ and also the work of Jean Meeus (astronomical Calculations) have helped me learn much on this subject.

I wrote a program in Qbasic with an IBM PS2 computer to track asteroids. It functioned perfectly with the exception of a difference in the correct estimation of magnitudes... Mr. Giorgini (senior engineer JPL/NASA) suggested how to correct the formula.

I started to visualize an asteroid tracking station, but my financial situation did not make it possible to pursue my plan. Also I was concerned about the quality of the sky (in the downtown area in Brussels). Not only were those problems bad enough but I was also intimidated by the amount of things I had to learn to observe these objects suitably (CCD + protocols + comments to start an astrometry program published by Minor Planet Center).

After thinking about all of this for a few discouraging days, I decided to at least try this difficult mission. My sons Xavier and Vincent built me a good “State of the art” computer and provided me with lots of advice and useful software; an internet connection was also necessary. 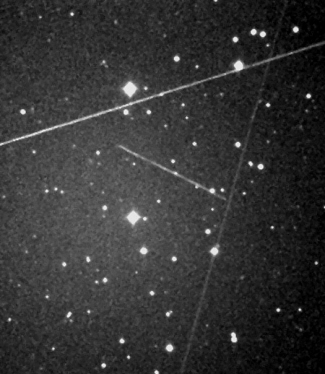 I contacted Herbert Raab to acquire the software 'Astrometrica' and within days I was capable of measuring stars thanks to the plates of Palomar Survey online on the net.

I realized that my measures where not too bad and I had a good tool for doing a serious job…but alas….I did not have the adequate observing instruments.

While randomly surfing the net I discovered Arnie Rosner’s Rent-a-scope. He offered a service that permitted observing via the net without any special software program except for the internet browser... I did not believe my eyes!!! Moreover the instruments that were made available were of incredible quality!

Also thanks to Mike and Lynn Rice, the owners of New Mexico Skies Observatory (IAU H06) who host, Rent-a-scope. New Mexico Skies is located at an altitude of 2225m with splendid desert dark skies.

Thanks to Arnie’s Rent-a-scope operation I can observe without the need to own a personal instrument…this is a great thing for those of us who have no instruments and/or are living in great polluted cities.

The work (the fun)

Any part of the sky (above a 20° altitude) is accessible for observing with the various different scopes available at Rent-a-scope. You simply enter the name of the object (for example NGC 7331) or the position just as it is (ex 07h32m21s, -12d52m32s) and ‘click’ on 'slew to' and the telescope system will point to your object. A click for the settings (filters and so on…) if necessary and a final ‘click’ on ‘Take image’ and that’s all there is to it!

You obtain an image jpg immediately after the exposure…believe me that the first images taken under good conditions are absolutely incredible! When the session is over the science data in the form of FITS files are zipped and sent to a high-speed server via a high-speed data connection for your retrieval at a more convenient time.
Any observers anywhere in the world can do this…it is all explained …it’s easy! I remember sessions where I enjoy classical music while observing! Ahhh…this was pure magic; the merging of science, information, technology and music!

For Astrometric work it is better starting with relatively slow objects before venturing after the faster ones. Once your credibility as an observer is established you can observe more ‘exotic’ objects such as NEO’s the most interesting type of object objects from my point of view. In this connection I also make a point of thanking Peter Birtwhistle of Great Shefford Observatory (IAU’s code J95) for his invaluable advices which helped me in my work... he is a great teacher!

The most interesting NEO’s are on the Near Earth Confirmation Page (NEOCP). These objects were discovered by great surveys (and also sometimes by amateurs…). They need to be confirmed in order to establish an accurate orbit by the Minor Planet Center (MPC). The follow-up is essential…the unconfirmed discovery is useless! Some of the most interesting objects are also on different critical list (see links below). 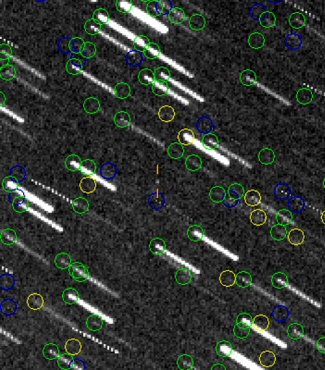 See the unspecified critical list at the NEOCP. A chart is provided by the MPC with the probable position of the object, its direction and the computed speed and direction of moving (PA) and also the expected magnitude…all of this data helps the observer to choose the appropriate object relative to the capabilities of the specific scope(s) to be used.

Afterward comes the true work. Blinking and detecting small planets (moving objects that may be obscured by a crowded star field). This becomes a difficult chore even with the help of the information obtained from the MPC.
With NEO's things are harder because the speed of these objects can reach (and exceed a speed of 100"/minute!) This amazing speed obviously greatly reduces the quantity of photons recorded in a given time exposure on the pixels of the CCD. Fortunately with the software from Herbert Raab you can add and stack images which permits the observer to see faint objects more easily…all of this works in such a way as though you were using a larger scope. Also the software permits the asteroid measurements to reach MPC in the correct format.

After six months of work with the telescopes of H06 and considering the results obtained to date, I strongly urge any observer even remotely entertaining this activity to at least test the system... its magic. It gives me great hope for other seriously minded observers to be able to contribute important scientific work. This would be especially true for those who do not have their own observatory or live in the large light-polluted city.

I sincerely think that this is the future methodology to practice astronomy of tomorrow (at least for asteroid work). I again add my thanks to Arnie Rosner for investing in this beautiful and great system and to Mike and Lynn Rice for this location that provides a splendid sky at the border of the New Mexican desert. It is needless for me to say that I have the deepest respect for all observers who work in the more traditional manner…after all it’s observing that’s essential. However, this formula is the only possible solution that works for me to study minor planets. 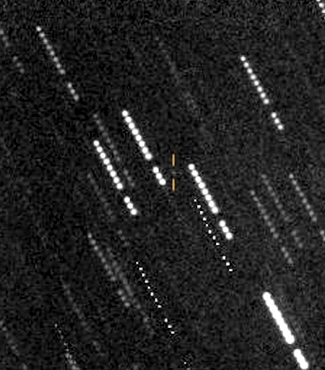