A new contender on the Alt-Az block! 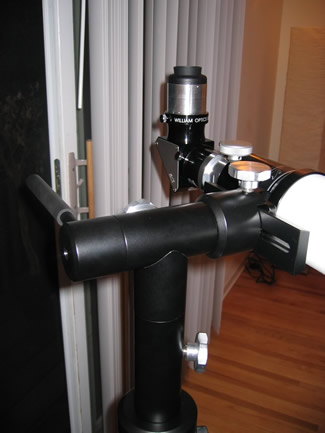 41 years old with only one year’s serious astronomical viewing under my belt. I have owned an XT8i for about 8 months and a Williams Optics Megrez 80mm Triplet Apo. for about two months. I view mostly under Mag.3.5 skies at my home in New Jersey.

I decided to buy the Megrez as a portable scope as we travel a lot and quite often by airplane. I needed a decent mount for the Megrez and remembered I had an Orion AZ3 in the basement. I popped a dovetail in it and took it out for a nights viewing. Overall it performed adequately especially as I had stripped out the grease (glue more like) it came with and put in some lithium grease. The legs gave back some vibration and the head just didn’t feel substantial; sure it could hold the Megrez easy enough but it felt ‘cheap’.

Having just spent a few dollars on the Megrez I didn’t have much to spend and started looking for reviews of mounts. The Williams Optics EazyT was gorgeous but way too expensive as were the Takahashi Teegul and quite a few others.

I came across a thread on Cloudynights about a new mount being offered to the market and being a sucker for innovation and supporting the small manufacturer I asked a few questions on the thread. Seems someone there had had a chance to use one but had returned it for a modification. I emailed the poster to ask about their initial impressions and they seemed pleased. They also seemed confident that the contact at Desert Sky Astro (Raul) would resolve the issue.

I emailed Raul to ask about the issue and what he was doing to resolve it and he sent me an email detailing the changes he was making to give better tension in the Alt movement. I liked that he shared his ideas and thoughts with me so I went ahead and ordered a DSV-1 and a 6” dovetail.

There was a delay in the shipping of the mount due, I was informed, to a delay at the painting facility and a week and a half later than expected my mount arrived. It was very well packaged and had no sign of any scrapes or dings. It came with a 6” dovetail configured for my Megrez ‘L’ bracket (the dovetail costs extra) and a base configured for use on a camera type tripod (it can be ordered configured for a surveyor style tripod (5/8-11 post) or on a photo tripod (3/8-16 post).

I set it up on my Bogen 3233 and it was a good fit and stable. There was a little lateral movement in the middle where the Azimuth axis rotates inducing a wobble. I emailed Raul and he suggested it likely had loosened a touch during transport and simply to tighten the allen screw with the supplied allen key. I did and it cured the wobble.

I slid the dovetail into the mount and tightened the chunky knob to secure it in place. The scope rotated forward in the altitude axis so it pointed to the floor. I was disappointed that even when I tightened all the allen screws it didn’t help! I emailed Raul and whilst waiting for a response I added the diagonal and an EP to the scope and extended the dewshield; EUREKA!

I raced to the computer to email Raul and tell him what an idiot I was only to find an email from him saying “Set up the scope ready for use and you will likely find the mechanism works fine”! Embarrassing or what!

(I should add here that I spent an hour or so fiddling with the various allen screws seeing what effect each had; this was NOT necessary but just a trait of mine in wanting to understand how things work.) 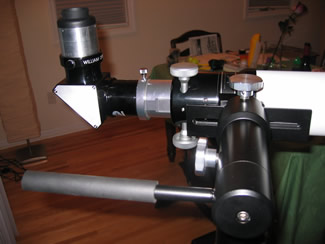 I moved the scope around using the handle supplied with the mount and it glided smoothly in both axes but with sufficient tension to hold the scope in place. I swapped from a 1.25” EP to a 2” EP weighing 5x as much and the balance did not change. I added a Speers Waler 10mm which was heavier than the 2” and longer and still the balance did not change. I put the 10mm into a Klee Barlow and guess what…no change! 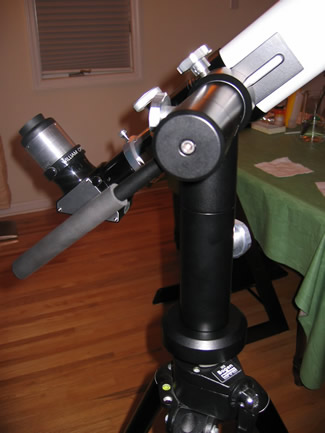 I had an hour with the scope outside the second evening and was pleased with it but felt it needed a longer trial so a few nights later I managed a three and a half hour session in North Jersey. It was windy that night yet there was little affect on the Bogen/DSV-1 combination (the XT8 on the other hand….). I place the diagonal such that my eyepiece and the mount handle were on the same plane which made it easier to get very accurate small movements when panning the skies or following satellites.

There isn’t anything more to add at this point about that evenings viewing; the mount worked as I hoped it would. At 6.5lbs it isn’t the lightest option out there but it is compact in design so would be easy to transport as an aircraft carry on.

I can’t fault the design or the finish of the product (okay so the rubber on the handle could have been cut a little straighter) or the support I have received from Raul at DSA. I wish there was more I could add but to quote a well known advert on British TV:

“It does exactly what it says on the tin”. 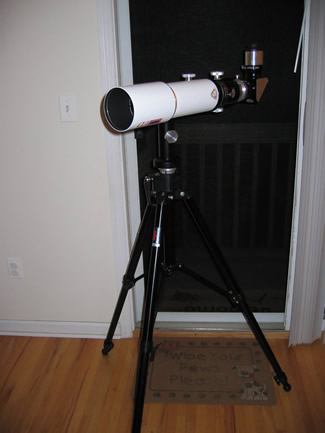 By the way: I shall be adding a Takahashi Clamshell to the equation to hold the Megrez; I will update the review with the findings of that change.

The clamshell looks great (better if I get it painted I know) and is very secure. The extra weight has taken me close to the edge of the mount performance IN ITS CURRENT STATE. That is, I know there is still some allen screw adjustment left so it will be able to hold more than this and still provide sufficient tension in the Alt.

Total weight hanging from the mount with a 12ox EP is now: 9ibs 1oz.

A longer dovetail and removal of the L bracket from the Megrez would also give much more opportunity to move a scope around and find balance. The AZ movement by the way is still as smooth as melting butter. 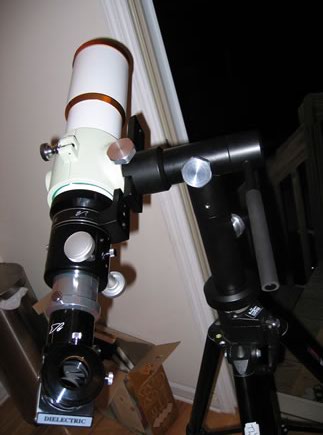