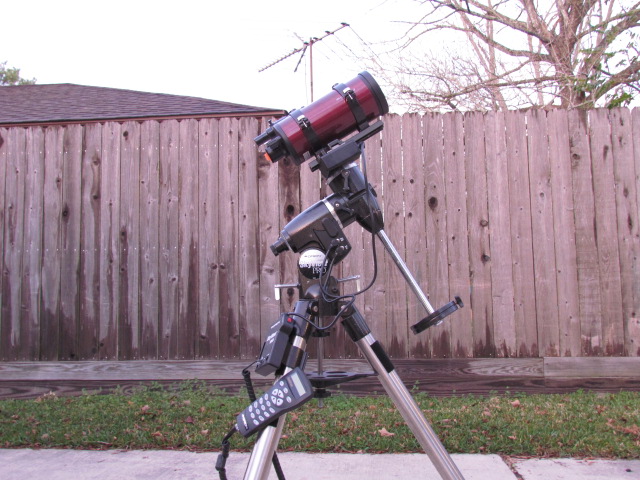 I wrote my original review of the SkyView Pro in 2008 when it had manual slow motion controls and the IntelliScope DSC system. I added the Tru-Track motors. Finally, I wanted to make the mount smoother and easier to control using the manual controls, so I disassembled the mount, cleaned it, regreased it and adjusted the backlash in both axes. Unfortunately, during disassembly, I ruined the IntelliScope encoders, and was unable to get replacements from Orion as they had discontinued selling the IntelliScope for equatorial mounts.

I didn’t really like the TruTrack motors. Not because they didn’t work, but because you have to loosen a clutch before moving the mount manually. I found I preferred to track manually than to have to disengage the motors before using the slow motion controls. That’s all personal preference, I’m sure.

That all brings us to 2013: I now have the SVP go-to upgrade kit on my SVP mount. It’s been a long path to today, partly because this isn’t my main mount. I’ve learned a couple of things that some will find obvious and wonder why it wasn’t to me; but some might find helpful.

I still like the SVP mount. Now that it’s been cleaned and regreased and the backlash adjusted it operates smoothly and fairly quietly with the go-to kit motors. It tracks well for visual use when properly polar aligned. It provides a stable platform for my family’s 4” Maksutov. It doesn’t handle my new, home-made 8” Cassegrain well, though. That telescope weighs 21 pounds. I’m a bit surprised that the mount’s performance degrades so noticeably when overloaded by so little. The symptoms I notice are “ticks” as the mount tracks; I can see the image move every time one of the motors takes a step. I am also unable to do a successful 3-star alignment with this scope mounted. The best I’ve been able to achieve is “Alignment May Be Poor”, and it has been. Pointing accuracy with the 8” Cassegrain mounted has never been good. Use this mount well within it published weight limit.

The go-to kit works well once it and mount are set up properly. Here’s what I have found is necessary to set things up properly.

When installing the go-to kit, make sure the motor gears mesh smoothly with the drive gears on the worm axes.

I was surprised to find that Orion doesn’t make mention of the backlash adjustment utility in the instruction manual, because it is critical to getting a successful alignment and accurate go-tos. When setting up the controller, I moved the mount in declination “forward” and “backward” adjusting the amount of backlash compensation each time until the image of a star stayed put after each change in direction. I did the same procedure with the RA axis. Then I tried a 3-star alignment. If the alignment was “Unsuccessful”, I made some minor tweaks to the back lash compensation and tried again. Within a couple of hours one night I had it right.

Finally, when setting up the mount for observing, make sure the mount is level and polar aligned well. I use a bubble level on the spreader/ accessory tray and have installed the Orion polar alignment scope. In my experience, the SynScan programming isn’t very forgiving of poor polar alignment. I’ve tried to make 3-star alignments with poor polar alignment and the software never did point the scope closer to the second and third stars than it did to the first star. In other words, the pointing model wasn’t correcting errors and converging. Now that I have the tools to polar align easily, I am able to make 3-star alignments easily and pointing accuracy is good enough to find objects at 100x.

One thing that isn’t important when building a pointing model in Gemini (my main mount is a Losmandy with Gemini), but is important doing a 3-star alignment with the SynScan controller is to meticulously follow the procedure of finding a star on one side of the meridian between 30° and 70° declination, a second star on the same side of the meridian, and a third star on the other side of the meridian between 30° and 70° declination. I used to pick three stars spaced out across the sky. I didn’t have any success with 3-star alignments until I reeducated myself by reading the manual and following the procedure.

There are things I don’t like about the SynScan hand controller. Funny to hear from someone who uses a Gemini, I know. I really wish the controller had an internal clock, I hate it that I have to reset the date and time every time I turn the mount on. I wish that every alignment star was available at each step during the alignment process. After I make my first alignment, only some of the stars in the alignment star list are available for the second alignment star. I’m sure the controller software is trying to limit my choices to ensure a successful alignment, but I want to be able to pick the star I want to pick. I wish the various object lists were subdivided. For instance, if I want to look at a “Named Star” I have to scroll through the whole list every time. How hard would it be to scroll through the alphabet, hit enter, then scroll through only the stars whose names begin, for example, with “N”? I wish I could go-to a specific RA/ Dec coordinate rather than displaying the current coordinates and then slewing where I’d rather be. Isn’t that the point of go-to?

Oh, and I quirk that may be unique to my mount: if I don’t do at least a 1-star alignment before observing, the mount “runs away” when I try to move it, even just a little bit, in RA. Infuriating. So now, even if I’m just going to observe the moon (easily found even without go-to), I do a 1-star alignment: I pick a star that is in the vicinity of the object I want to observe, let the scope slew to that star and hit “Enter”. I don’t bother to center the star because actually performing an alignment isn’t important, only that the SynScan controller thinks that you have performed an alignment.

On the other hand, I love the tour function, but wish some of the fainter objects weren’t included. This mount won’t carry a scope that will show magnitude 11 galaxies well. The Pointing Accuracy Enhancement function is helpful. I’ve never tried Periodic Error Correction, not being an imager.

Sadly, I’ll have to part with the SVP soon, since it doesn’t carry my current scope well. The good news is I’ll get to try its bigger brother, the Sirius as soon as I can find one.