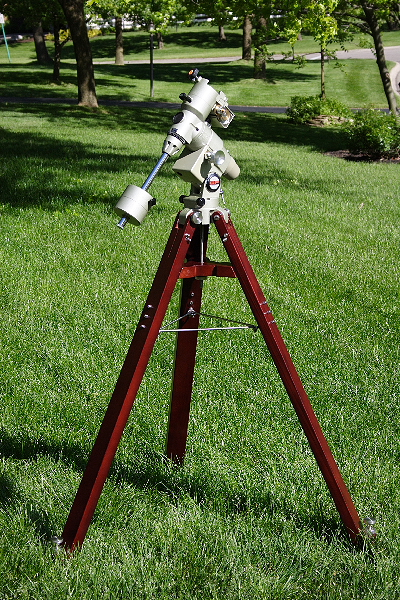 Background
I am living in central Ohio and have been interested in Astronomy for over twenty years. In the last ten years I have been actively observing with a number of telescopes. Over the years I owned three refractors (ranging from 80 to 100 mm), three catadioptric scopes (3.5, 6 and 8 inch) and and two dobsonians (8 and 12 inch). During the last five years I have gotten interested in astrophotography. You can see some of my attempts on my website http://www.physics.ohio-state.edu/~rhennig/Astronomy.

I have been using a Vixen GP mount for many years to observe and image planets and deep-sky objects with my Intes MK67 Maksutov and Orion 80ED refractor. While the stock aluminum tripod that came with the GP mount worked marginally for longer exposures it was impossible to image when it was windy and difficult to focus due to vibrations. Focusing a DSLR or a webcam was a challenge with the aluminum tripod and required a lot of patience. When a friend of mine, Alex Choy, told me that he started designing and manufacturing a replacement tripod for the GP mount and its clones, I jumped at the opportunity and asked him to send me one to replace my aluminum tripod and to test it for astrophotography.

I received one of the first production models of the Imager tripod from Venus Optics in mid-March 2006. Venus Optics is based in Hong Kong and has a website describing this tripod and a new 80mm triplet refractor: http://venusoptics.com. The tripod arrived within about a week by airmail in a long box. The wooden legs were very well packed and individually wrapped. All the parts such as screws and bolts came boxed and wrapped separately. Everything arrived in perfect condition without any scratches. When I took the tripod home, my wife was impressed by the look of it that I could display it in the living room. The legs and stabilizer are solid hardwood (European cherry) and all the other hardware parts a stainless steel. The tripod comes also with a DVD explaining the setup. The tripod weighs 19 lbs and has a height of 40 inches.

Of course the first following weeks were rainy and cloudy and it was not until three weeks later that I could take the tripod out to observe and image. On April 9, there was a break in the clouds for a few hours and I took the Imager tripod and my Maksutov telescope out to do some observing. I set up the tripod in the drive way. The tripod has adjustable feet that allow adjustments over a good range to level the tripod. Our driveway has a slope of about 10 degrees and I had no trouble leveling the tripod. I set up the tripod on the concrete slab and placed vibration pads under the feet. Later, I learned that the tripod is even more stable when setup on grass with the feet pressed into the ground.

Setup of the tripod was very fast and easy. I did not watch the instruction DVD before setting up the tripod. Everything was intuitive and it took about five minutes to put the tripod together for the first time. For transport the tripod remains assembled and only the stabilizer bar is loosened to allow the legs to collapse. 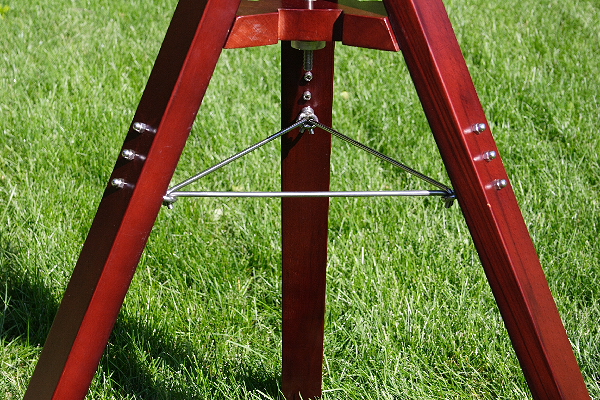 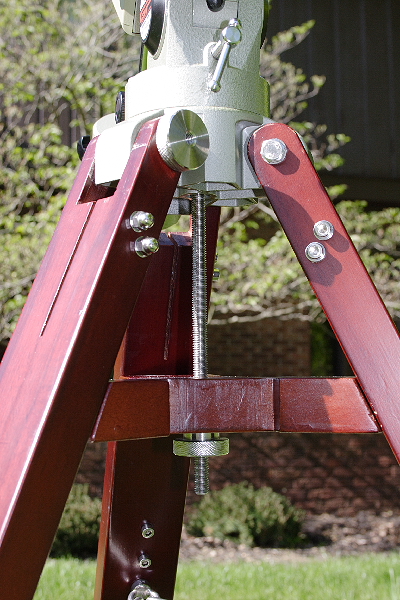 I put the GP mount head and my 6" Maksutov MK67 on the tripod. I pointed at Saturn and one thing was immediately evident: the tripod is much sturdier than the Vixen aluminum tripod. During focusing the planet was steady in the eyepiece and did not move during focusing. When I rapped the tripod legs hard, vibrations damped out in less than a second. When I rapped the optical tube, vibrations were similar in magnitude and dampened in a bit more than a second. With the aluminum tripod vibrations took somewhere from two to five seconds to dampen out. So far the tripod did what it was supposed to do, it is rock-steady and dampens vibrations well. It was a pleasure to adjust focus and to move the mount without any concerns for vibrations. 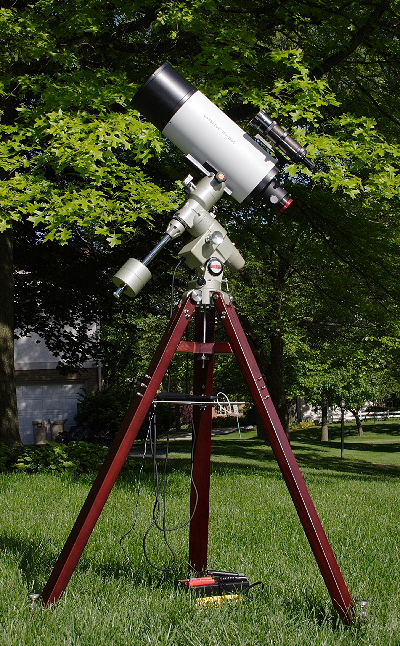 I observed Saturns rings and its moons for a while before moving on to some double stars and deep-sky objects. Castor was a nice clean split and M3 was well resolved. How nice to touch up focus without any vibrations. Soon after, the clouds rolled in and I packed up. All I had to do was to take the telescope off the mount, loosen the stabilizer bar, collapse the legs and carry the mount and tripod inside. One difference between the Vixen aluminum and the Imager tripod important for transport is the weight. The Imager tripod is significantly heavier and the legs are longer and do not retract. While this helps with stability it may be an issue for somebody who looks for a light travel setup. This tripod is surely made for imaging and comfortable observing.

The height of the tripod is perfect for the 6" Maksutov and anything of similar size like an 8" SCT or a short tube refractor. Longer refractors are probably alright but they are always tricky because of the large range of elevation change of the eyepiece.

Over the next two months I used the tripod on several occasions with the Vixen GP mount, the 6" Maksutov and the Orion 80ED refractor. When observing I quickly forgot that was using the Imager tripod and could really enjoyed viewing the giant gas planets and deep-sky objects. I quantify how fast vibrations dampen out I took some short videos with my Phillips webcam of Jupiter. Hitting the tripod hard, the image is steady almost instantly. I estimate that the vibrations dampen in less than half a second, perfect for imaging and visual observing.

I am very happy with the tripod. The tripod does exactly what it was supposed to do: provide a comfortable observing height for my telescopes and dampen out any vibrations. It also looks nice and is of high quality. For anybody, who has a Vixen GP mount or clone thereof this tripod allows the mount to work like it should and help with imaging and visual observing. At the introductory price of $330 it is quite a bit cheaper than the competition, the TeleVue Ash Tripod for $459. The Venus Optics Imager tripod is a good choice for anybody that would like to upgrade their mount and to eliminate vibrations.