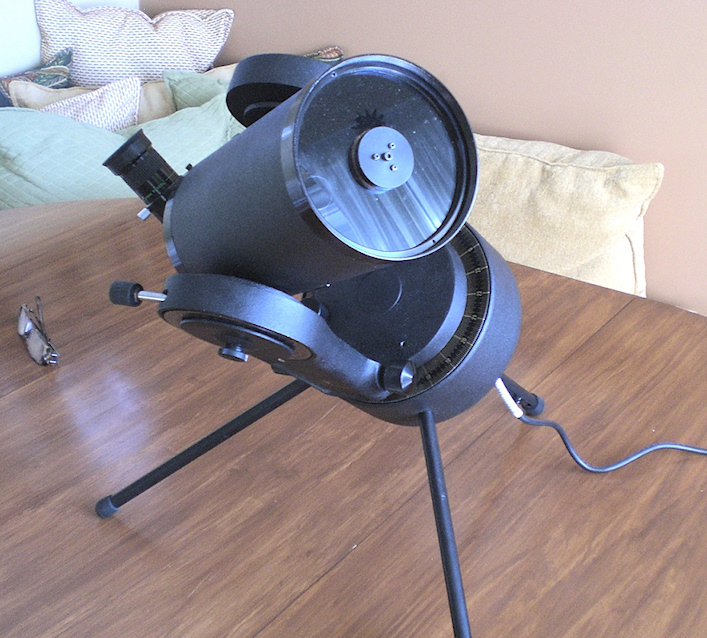 It is rare that a scope achieves such a heinous reputation that is becomes virtually worthless on the used market. Department store refractors are a good example, but somehow the B&L 4” SCT has ended up there too. But does it really deserve this reputation?

I recently purchased a Bausch & Lomb Criterion 4000 scope on impulse. I have been looking for that ‘perfect’ kick around travel scope and I’m a firm believer in the trial and error method of searching..

I had read up on these scopes and knew that the chances of getting a good specimen were pretty slim, but for the $100 odd dollars that I paid for it, I figured it wasn’t too much of a risk. Well, I wasn’t disappointed. However, a dog and a couple of spare parts later, I think I might have beaten the odds.

The B&L Criterion 4000 is a 4” F12 Schmidt Cassegrain design. They have a poor reputation for quality control and many were very poor optically. And this is a real shame, because overall, this little 4” SCT is very well engineered and manufactured.

First of all, the 4000 is all cast and machined aluminum - the only plastic on it is the front lens cover (which is a nice sliding fit with a handy finger grip). It comes packed in a fitted plastic carry case with room for the scope, base and various accessories. The overall look is rugged/handsome, particularly if you are taken with the gold on black motif.

It is a typical dual fork design supporting the OTA with outriggers fixed onto the rear cell. The OTA can be removed simply by undoing 4 Allen key cap screws and then the OTA can be mounted onto a standard photo tripod via the included ‘foot’. The OTA itself only weighs about 2 lbs so even light duty tripod could be used to support it.. The 4000’s were reported to have had a perfectly useless 4x20mm finder which was missing from my unit. The screws are still there so perhaps I’ll put a red dot finder on it. The long 1200mm focal length really requires a finder of some sort.

There are slo mo controls, locks and large diameter setting circles on both axis.

The base of the dual forks rides in two ball bearing races. Even a Questar doesn’t have this…Declination slo mo is through the traditional tangent arm with a wide degree of movement. It is smooth and positive. The RA axis has the typical slo mo knob and a separate RA lock knob. The RA is driven at the sidereal rate by a 110Vac synchronous motor in the base.

And finally, like the Questar and the Meade, it comes with three legs that thread into the base to convert it to equatorial mode, which sounds a lot neater than it actually proves to be in use. There is no substitute for a good tripod to bring things up to eyeball height. Perched atop a cheapo EQ2 aluminum tripod, it is a sturdy and vibration free setup.

The optics are housed in finely machined and anodised aluminum cells. The focusing is via the typical moving mirror method, and the focuser is smooth with only a hint of backlash. There is no image shift on my example.

Even the light shroud for the secondary mirror is machined and threaded aluminum. I know all this because my dog knocked it off the coffee table and carcked the corrector plate which then required a complete disassembly to rectify. Which leads to the next part of this review.

These B&L scopes labour under a cloud of poor optical performance and if my scope is any indication, it is fully justified. The optical performance of the scope as I received it (before dog incident), was, how can I put it……horrible. Things would never really focus sharply and there was a lot of fogging/light scatter. No amount of collimation tweaking seemed to change this. I had read on-line, that some units were shipped with unfigured flat corrector plates and I suspected that maybe, I had one of those examples.

So when the dog knocked the scope over, he did me a huge favour on several levels.

First, it caused me to put out a call for a spare corrector plate (thanks to those that responded) – which, as it turned out, has dramatically improved the performance of the scope.

Secondly, in its original state I couldn’t in all conscience have sold that scope to anyone, knowing how poor it was,

And lastly, it caused me to have to take the scope to pieces, which as you can tell from this review, impressed me enough to want to pass my findings along.

With the new corrector plate, the optical performance, while not in a position to keep Questar opticians up at night, provides decent images up 125X. The visual back is a prism type diagonal with dedicated threads for the rear cell. These threads will not accept other SCT accessories, but at least the diagonal accepts standard 1-1/4” EPs and seems to be fairly good optically.

So overall, these scopes are well engineered and manufactured from a mechanical standpoint, and can be reasonably good optically. So if you can get a chance to look through one before buying, they are a steal at the price levels that they seem to go for.

Even if the OTA turns out to be mush, the base alone is worth some bucks – just mount an ETX OTA on it. Now there’s a scope with the opposite problem…