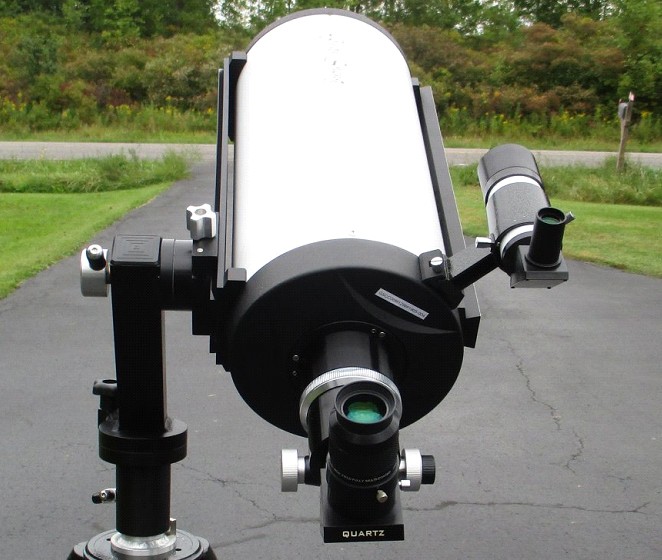 Decades ago, I acquired my first telescope with the performance and tracking ability to undertake serious planetary observing. The Cave Optical 8-inch, f/15, true Cassegrainian boasted excellent optical quality, but it was compromised by its hefty weight and puny 1.25-inch focuser that made any rich-field viewing absolutely impossible. However, the scope did enlighten me with its sharp image, high contrast, and the amazing sight of spokes in Saturn's rings before they were widely known.

As I moved through a series of larger Newtonians, SCT's, Mak's, and APO refractors, I had pretty much forgotten the virtues of the true Cass design.

Recently, Guan Sheng Optical of Taiwan (GSO) re-introduced the parabolic primary- hyperbolic secondary design in 6, 8, and 10-inch apertures. I opted for the 8-inch scope with a glossy white tube [it's also available with a gloss black tube] as it seemed to the best combination of capability, weight, and price.

With an advertised aperture of 8 inches and an f/12 focal ratio with an efl of 2436mm, the instrument is configured with a 2-inch, dual-speed focuser and spacer rings to bring it to focus with a variety of star diagonals and imaging cameras. The tube interior is graced by numerous light baffles that nicely suppress stray light.
Both Losmandy and Vixen-style mounting rails are attached to the tube to permit easy mounting, and a Synta dovetail is provided for finder or RDF positioning.

Overall fit and finish is excellent with no obvious flaws or inferior materials. The focuser, though it's not exactly a FeatherTouch, is quite smooth with no detectable wander or backlash. The GSO looks and feels like a much more expensive telescope.

Collimation of the telescope was found to be almost perfect right out of the box, and only high power made a bit of adjustment necessary. With the fixed-position primary mirror, the scope can be dialed in with the three recessed screws on the secondary mirror housing. Five minutes of tweaking resulted in dead-on alignment.

I mounted the scope on a simple Universal Astronomics Unistar alt-az mount with a 2-inch diameter leg Celestron tripod. This combination proved to be very steady at anything below about 250x and was light enough to be carried about as a single unit. I weighed the scope itself with a 50mm finder, 2-inch star diagonal, a 2-inch 30mm eyepiece in place (using the somewhat crude ”bathroom scale differential method,”) and it registered 19 pounds – lighter than a Celestron 9.25 but considerably heavier than a C8.

I suspect that an AVX equatorial would suffice for visual observing, but a beefier mount might be advisable for ccd imaging. 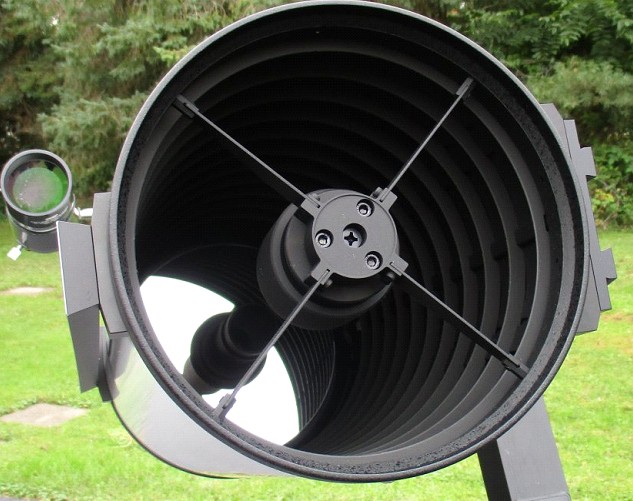 UNDER THE NIGHT SKY

In a strange quirk of fate, the usually uncooperative weather in the Buffalo, NY, area provided a string of clear nights that permitted a series of observations with the GSO and direct comparisons with APO refractors, a C8, and (twice) a Sky-Watcher ( Synta) 7-inch Mak-Cass.

With Jupiter near the meridian at sunset, I put the telescopes to work in observing the giant planet – to me, at least, one of the most definitive tests of an instrument's optical quality. With high-quality dielectric and prism star diagonals in place, I tried to equalize magnifications by using a complete set of Paradigm ED (Starguider) and TeleVue Nagler Type 6 eyepieces. Powers varied from about 145 to 252x, and close enough with the various telescopes to allow valid comparison.

I fully expected the excellent 150mm, f/8, ED doublet refractor to sweep the test, but the GSO Cass surprised with its beautiful rendition of delicate festooning in the (now yellowish) Jovian Equatorial Zone, high-contrast image, and true, pure color saturation. The Great Red Spot was a strikingly intense oval with its interaction with the SEB easily visible. The amount of detail seen was dead equal to that in the refractor with about the same overall image brightness.

In comparison, an excellent Celestron 8 produced a noticeably brighter image, but with lesser contrast of elusive detail in the polar areas and EZ. Certainly very good, but not quite up to the crisp, high-contrast views provided by the GSO Cass and refractor.

The 180mm Synta Mak-Cass generated images similar to those of the C-8: very pleasing but hard to hold in exact focus as the telescope seemed to have some difficulty holding thermal equilibrium and suffered from a bit of focal shift.

Trying higher magnifications in the 250x range showed no apparent breakdown of the image in any of the telescopes, but the traditionally poor seeing conditions in the Western New York area made true comparison almost impossible.

Overall, the victory here goes to the ED refractor and GSO Cass, as they provided the best image quality - something that I had not expected.

Saturn, its rings almost fully open to our line-of-sight, was glorious in all of the telescopes. Here ,again, the refractor and GSO rendered the sharpest overall images, but the extra brightness of the Celestron 8 made the “C” ring easier to see. The inner moons were also more easily visible in the C-8 as it seemed to have more light gathering power than the other telescopes. Details in the planet's North Equatorial Belts and north polar region, because of their inherently low contrast, slightly favored the refractor and GSO. As one might expect, however, Saturn looks good in any high-quality telescope.

Observing the moon from waxing crescent to near full again confirmed the fine optical quality of the GSO. The absolute lack of false color in the all-mirror system provided deep black shadows and stark contrast. At 162x, with a Paradigm 15mm eyepiece in play, the Cass showed marvelous detail in the craterlet chains near Copernicus and in the delicate rille system near Triesnecker. Craters in the lunar south stood out in bold relief, and lunar domes were remarkably easy to discern when near the terminator. The 150mm ED refractor was very slightly sharper and handled variable seeing conditions better, but it showed no additional detail.

On several nights with reasonably good seeing conditions, I ran the GSO through a series of challenging tests of resolution on a variety of multiple stars. The instrument proved to be very effective and pleasing in its delivery of authentic color and clean separation.

To some observers, the unavoidable presence of diffraction spikes from the secondary mirror's 4-vane spider could be an annoyance, but it did little to interfere with the view. I, personally, actually enjoy the effect.

The fairly difficult Delta Cygni, with its large magnitude difference, was barely resolved at 128x using a TV 19mm Panoptic, but became laughably easy at 203x with a 12mm Paradigm ED in the drawtube.

Compared to the 150mm ED refractor, the image in the GSO was not quite as clean, but its pinpoint rendition of both the primary and secondary stars was impressive.

A similar result was achieved with Epsilon Bootis and RasAlgethi with the colors of the stars being very true and accurately intense. Again, the refractor produced a somewhat cleaner image, but with a bit of chromatic aberration as the seeing conditions pushed the image in and out of focus.

The very sharp and concentrated stellar points with plenty of dark sky between nearly equaled the refractor view and fell just a bit short because of the larger first diffraction ring in the obstructed GSO configuration.

The frequently elusive companion to Antares popped in and out of view at 203x under rather indifferent seeing conditions, again aided by the tightly concentrated star images.

Overall, I found that the Cass is fully capable of resolving to the Dawes' limit with its excellent definition and almost refractor-intense images.

One unexpected virtue of the telescope was its ability to hold thermal equilibrium despite quickly falling night time temperatures. The scope was stored in an unheated garage, so I can't comment on how it would fare in a winter excursion from a warm house into frigid air. However, I never encountered any major air circulation problems or out-of-focus “spikes” coming from the secondary mirror.

In addition, despite some fairly intense dew formation that rendered the finder useless, the optics of the GSO never suffered from any condensation – one of the obvious advantages of an open-tube design.

An f/12 telescope is obviously not the best choice for deep-sky observation, as its long f/ratio makes true rich-field observing impossible. Nevertheless, the GSO acquitted itself well by generating pinpoint stars, color purity, and fine contrast. The Double Cluster in Perseus just squeezed into the field-of-view with a 2-inch, 30mm wide-angle eyepiece at 80x. A lovely sight. However, the image seemed to no brighter than that produced by the 150mm refractor and was FAR dimmer than the C-8's image. The same lack of image brightness was confirmed when viewing M13, M27, and another dozen or so of globular clusters and planetary nebulae.

With the advertised high-reflectivity mirrors, the GSO should have roughly the same magnitude penetration and image brightness as the C-8. I contacted the dealer, Agena Astro, to explain the situation, and they immediately queried GSO for the technical details. The response was detailed and quite interesting.

The design of the telescope is a compromise that gives priority to high-power lunar and planetary performance. With the relatively short-focus parabolic primary mirror, a large secondary that would degrade image contrast would not be desirable. The solution: Use a smaller secondary [still a roughly 33% obstruction] and reduce the effective aperture of the scope to 7.34 inches(186.5mm). According to the factory specs, the 100 percent illumination circle is 15mm. The sparkling planetary views are the result, but light grasp obviously suffers. This is reminiscent of the situation with the Synta 127mm Mak-Cass that, from numerous reports and measurements, has a clear aperture of about 118mm.

I, for one, would appreciate some truth in advertising here. ANY telescope should be defined by its clear aperture and not the diameter of its main optic.

Nevertheless, deep-sky performance of the scope is generally satisfying because of its tight star rendition and dark background, but the configuration is not optimal if maximum light grasp is needed.

GSO Cass can be regarded as somewhat of a specialist instrument. Its excellent overall optical quality, fine lunar and planetary performance, reasonable size and weight, and bargain price make it a fine choice where sterling deep-sky and rich-field capability are not a priority. It is a good alternative to much pricier 5 to 6-inch apochromatic refractors for both visual and ccd work. In the price- to- performance ratio, I don't see anything in its price range that comes close (except, perhaps for a high-quality long-focus Newtonian [but try to find one!]) as a dedicated lunar and planetary instrument.

One could only wish that it were a TRUE 8-inch telescope.

Disclaimer: I have no affiliation with or financial interest in Guan Sheng Optical or any of the manufacturers or dealers mentioned in this review.