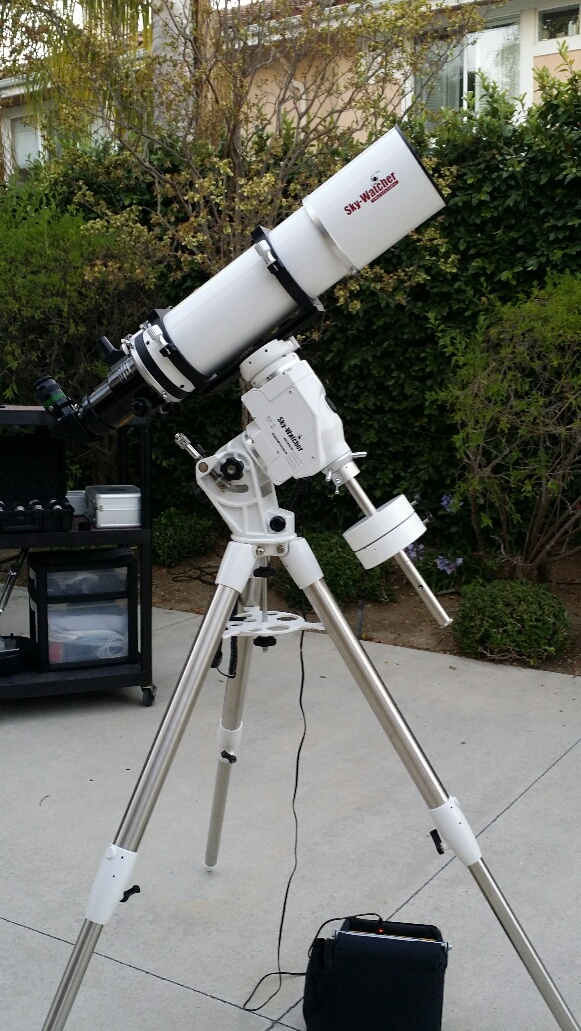 One of the benefits I have, given the friendships I have with many in the Astronomy world, is the opportunity to test out a lot of equipment that is new. What I have found most impressive as of late is the quality of optics now coming out of China compared with those of years past. This past Friday, I had the opportunity to test a new Skywatcher Esprit 120mm Triplet APOs. Normal calculations on the odds given by the astronomy gods would indicate I should have cloudy sky nights equal to the square of the number of inches purchased. Since I didn't buy this scope, it was a loaner, I should be able to circumvent that rule. It apparently worked because the following weekend skies were favorable so the testing could begin.

My visual site is located in a suburban neighborhood in Southern California with a naked eye magnitude limit of between 5 and 6. This is darker than many but by no means a dark sky site. For the purposes of the test however it is more than dark enough. Also bear in mind that I have been lucky enough to enjoy using a great many scopes and all of my own conclusions are based purely upon my own experience in using some of my own equipment. For those of you that are equipment savvy and are wondering,well, what have you owned? The list includes, a TMB203 APO, two Takahashi TOA 150s, two TOA 130s, two Mewlon 250s, a Mewlon 300, an FSQ106, A TSA102, several Celestron SCTs including both 11s and the venerable 9.25. They were all nice in their own respect. In those cases where I have owned more than one, they were at different times; the popular, "I wish I hadn't sold that" syndrome came into play on more than one occasion. The fact is, my wife understands my passion for Astronomy and I spend an enormous amount of time observing. But I don't spend hours driving to pristine dark skies but rather live within the limitations of my sky and the limitations of the equipment I'm using. I did reach a point when I realized that there is a law of diminishing returns in nearly anything and it applies to astronomy equipment. You know, that point after which spending twice the money gets you a very minor improvement? Today, I focus on those products that I think are within reach of most astronomers and that represent a good value for the performance opportunity.

The scope arrived in a very nice aluminum foam fitted case. Inside the case was the OTA, a very nice set of aluminum cast rings with nicely machined aluminum knobs mounted on a D-style plate. The cap-head bolts holding the rings to the dovetail were loose but easily tightened with an Allen key. The same was true with the dovetail plate on the included finder bracket, but again, easily remedied. Some of these little things might make one wonder about he workmanship overall, but don't worry, I'll get to that. Unlike most refractors, this scope includes a field reducer flattener for astro photograpy as well as a T-Ring for canon EOS camera bodies. Also included is a very nice 2 inch dielectric diagonal with a 2 inch to 1.25 inch adapter. This level of scope assumes a very discerning viewer and that he or she will have their own preference in eyepiece design and so includes none. However the scope is nicely equipped for use right from the start.

The OTA is not a lightweight scope weighing in at 22 pounds. The physical tube including dew shield is large given a medium aperture and sports a very beefy 3 inch rack and pinion focuser with a top guide rail to eliminate shift as you change focus direction, a very nice touch. Under load, I found that the focuser was very smooth but tended to slip. The mechanism is equipped with a clutch to lock the focus. The clutch is a clever, lever design rather than the traditional knob, it is easy to use and positive. Still however, I wanted to stop the slipping yet achieve smooth focus. The answer was to slightly tighten the thrust roller bearings against the drawtube through the adjustment holes provided. There are 4 of these in two rows about 60 degrees apart on the circumference of the focuser. There is no need of searching out a replacement higher quality focuser for this scope. The included focuser is rigid and very smooth. A large knurled collar with metal thumb tabs allows the entire focuser assembly to rotate for astrophotography. At the end of the drawtube, a double set of threaded rings allows the user to rotate the camera or diagonal at the visual end as well; another very nice touch. The dewshield retracts and two chrome thumb screws hold it in place when extended or retracted.

My own impressions of refractors has led me to the conclusion that while the color corrected triplet design offers the best correction of chromatic aberration, the extra element also at times can introduce some additional light scatter resulting in slightly lower contrast than the doublet ED design. I personally like some of the old Takahashi FS series Fluorite scopes for the rich contrast that they offer. Out of focus chromatic error is noticeable but in focus images are free of color. I think that's the good mark of a doublet. Additionally we all know that no scope performs at it's best until it reaches thermal equilibrium. The triplet design requires a longer time period to attain this. There's simply more glass to equalize, it's just physics. For this reason, I gave the scope about an hour to acclimate with the visual back removed to allow ambient air into the tube.

My first target with the scope was Izar, a very nice double in Bootes. Initially I started out with a 12mm Televue Delos eyepiece. The split on the star was beautiful as was the color contrast of blue and orange. Increasing magnification using a Televue 4-6mm Zoom eyepiece yielded beautiful airy disks with a hint of the first outer ring, indicating that most of the energy was retained at the center. Clearly both seeing and the scope were performing well tonight.

For those of you interested in the laboratory approach, I decided to run a quick star test on the scope using Alphecca, a reasonably bright star, but not overly so. The Esprit revealed fairly even energy across the pattern, both inside and outside of focus. Inside of focus the pattern was very slightly less distinct indicating the scope was slightly overcorrected. Later in the evening I returned to the same star and performed the test to find that the additional cool-down time gave me a much better test and that the spherical was very close to dead-on. There is not hint of color nor any astigmatism. Overall the optics tested very well.

Saturn was a treat on this night. At about 84x, the image was razor sharp. I immediately went to the nagler zoom at 6mm and again, 140x, rock hard, with amazing detail even on the inner, nearly transparent ring. Zooming into 210x the image still did not break down!. In short, the scope seemed to take any magnification I had to throw at it. Only at 350x did I see any image breakdown and that likely was more the seeing than the scope.

Airy disks on Epsilon Lyrae and on T-Lyrae were a joy to behold. If was as if you could drive a truck between each double. Unfortunately some of my favorite doubles Zeta Cancri and 12 Lyncis were both in positions that were too low and not within my view. I can't wait to see either of these wonderful triple systems through the Esprit.
The light grasp of the 120 provided very nice resolution down to the core of both M5 and M13. The fainter but beautiful M12 was a treat that resembled powdered sugar on black velvet. A testament to the contrast that is beautifully rendered in the Esprit.

At this time, I decided to mount up my Vixen ED115 Doublet Apochromat. I had set it out to cool so it had been given adequate time to reach equilibrium and I was anxious to compare the contrast with the Esprit. The globulars M5, M13, M12 and M4 all provide a good test for this. As I expected, the Vixen provided a slight improvement in contrast over the triplet design of the Esprit, but it was certainly not a night and day difference; it was very subtle. In fact without the direct comparison on the same objects I would be happy with both. I did notice an overall even illumination in the Esprit as compared with the vixen.

The Skywatcher 120 Esprit is a class act, it does everything a good triplet of it's aperture should do and very well. At 22 Lbs. it's a bit more weight than a lot of other 120s but it's build quality and feature along with loads of included accessories make it one of the best values I've seen in a scope of this aperture. The included Aluminum foam lined case is, in itself, a value add that is very, very nice indeed. I have access to a friend's Explore 127 APO that would make an interesting comparison with this scope. In a future review, I may do, just that.

I have always loved my Vixen 115ED and for good reason; its a very nice scope with good aperture and fast cooldown times. I will say though that this 120 is one of the first reasonably priced scopes at this aperature that has me thinking about selling the Vixen to buy this thing; it's that good. Another interesting comparison will be to compare this to the Skywatcher 120ED Doublet. Perhaps another review

Just for fun, I also had cooled my Vixen VC200L. Not a refractor but a larger aperature at 8 inches. While I could definitely seen a difference in the depth of image on deep sky objects, it was by no means a huge improvement. The 120 Esprit makes up in contrast what it lacks in aperture by comparison.

I have always said that if I had to go from having a couple of scopes to one in weighing aperature versus portability, contrast and almost crystalline view, then that one scope would be a decent aperature refractor. This 120 might just be the ticket. It's portable, nicely outfitted, performs well and has larger than average aperature at the price point. I think anyone with this scope will be very happy with their purchase. This is a very enjoyable instrument and it's only 183 days until Christmas!
Clear skies,