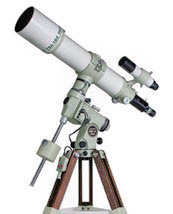 As a confirmed refractor junkie, I’ve owned dozens of these slender beauties over the years in search of the perfect and portable instrument. Despite having a number of larger telescopes, I’ve found through trial and error that the 4-inch refractor class is the ideal antidote for the mercurial climate found in Western New York. With observing many times limited to a brief foray under semi-cloudy and turbulent skies, the high optical quality, quick cool-down time, and light weight of a small refractor maximizes viewing opportunities.

Having tried achromats of f/5, f/6, f/10, and f/15 focal ratios, I graduated to ED and APO glass, culminating in the acquisition of a marvelous Takahashi FS-102NSV fluorite doublet. But when Tak announced the availability of their new TSA-102S triplet, I was quick to take the bait. Could this be the absolutely perfect 4-inch refractor that I’d been seeking for decades?

With 2 Takahashi FS-102’s available for direct comparison, along with an AP Traveler and TeleVue NP 101 Petzval owned by members of the Buffalo Astronomical Association, I could also draw upon my fairly recent experience with 2 Borg 101 ED’s, a Stellarvue SV102ABV, William-Optics ZS110, a brace of Vixen ED’s, and a Tak FSQ-106. The results would prove to be quite interesting.

The Takahashi TSA-102S arrived in the customary triple-layered box, unscathed and in dead-perfect collimation – always a relief. The tube of this four-incher is relatively short, just about 23” in length from the fully retracted dewcap to the drawn-in rack+pinion focuser. The smooth, gloss white tube is accented by an “end cap” and focuser finished in the traditional Takahashi lime green – a bit stark perhaps, but also very classy and attractive. Tak advertises the TSA as being “airline portable,” though it’s just a tad too long to meet the 22” limitation on length. However, with the tube ANGLED in a proper-sized carrying case (Thanks, Pythagoras!) it will fit.

With an optical tube weight of just about 11 pounds, the scope is also relatively light, and its 114mm diameter tube is identical to that of the FS-102 and FSQ-106. Tak has a dedicated tube holder as an obvious choice for secure mounting, but ring pairs by Parallax and several other manufacturers fit perfectly. Even the lightweight, inexpensive Orion 116mm rings will serve if shimmed with a bit of extra felt. A snug press-on aluminum dustcap is provided to keep the optics clean, and 2, 2.7” focal extension tubes ensure focus can be achieved in almost any optical configuration. A 1.25” compression ring eyepiece adapter is also included. With 230mm of back-focus available, the scope is well-configured for both visual observation and ccd imaging.

The 2.7” Takahashi rack+pinion focuser operates with the traditional smooth precision: absolutely no backlash, image shift, or changes in “feel” throughout its focusing range. A locking knob provides the proper amount of tension. With the telescope’s rather long f/8 focal ratio, precise focus is easily achieved with the single-speed unit, but aftermarket kits from Takahashi and others allow upgrading to a dual-speed unit if it is desired.

No finderscope is included with the TSA-102, but the standard Tak bracket to accommodate a 30 or 50mm finder is a low-cost option. The BT Technologies quick-release also fits perfectly.

Overall, the TSA-102 exudes quality and almost certainly inspires a strong sense of owner satisfaction and pride. At a price of $2695 for the basic optical tube assembly, it’s not exactly inexpensive, particularly when desirable options are added, but there are a number of 4-inch APO’s that cost considerably more.

I fully expected the TSA-102 to star test well. Takahashi claims an incredible .992 Strehl ratio for the triplet objective lens that incorporates an FPL-53 ED element air-spaced between two “low-dispersion” crowns. Color correction is ostensibly three times better than that of the fine Tak FS-102 dual-element fluorite, and the focal deviation of all wavelengths from 436 to 656nm (H- Alpha) is reputedly no more than +/- 0.01mm. This should provide an excellent platform for the newer blue-sensitive ccd sensors. For visual observation, the scope should be absolutely devoid of spurious color, its f/8 focal ratio and effective focal length of 816mm allowing superb correction.

And superbly corrected it is. Using Polaris as a test star at a magnification of 233x with a 3.5mm TeleVue Nagler Type 6, I found the Tak to be extraordinary: there was no trace of astigmatism or spherical aberration. Fresnel rings were beautifully defined and almost identical in and outside of focus. Furthermore, there was NO false color in or out of focus. The Airy disk of the North Star was solid and very sharp with a very delicate and perfectly defined first diffraction ring looking very much like the theoretically “ideal” image of an unobstructed optical system found in textbooks.

With this in mind (and braving single-digit temperatures) I turned the Tak to some classic double stars. Despite mediocre seeing conditions, the TSA-102 provided a superb view of Castor at 117x using a TMB/Burgess 7mm planetary eyepiece. The main components of the system looked like two car headlights of slightly different intensity with plenty of dark between and absolutely accurate color rendition – as good as it gets.

Turning to the beautiful triple Iota Cassiopeiae, I obtained perhaps the finest view of the tight trio, at 163x using a 5mm TV Nagler Type 6, that I’ve ever experienced. The first diffraction ring of the 4.6 magnitude primary star was so delicate as not to interfere with the 2.5 arc-second distant secondary. The absolutely black sky between the these components and the mag 8.4 tertiary made the whole system look like a computer simulation – perfect in sharpness and color authenticity.

On a lark, I decided to attempt the wickedly difficult Eta Geminorum (Propus) with the TSA-102. This challenging double features stars of magnitude 3.3 and 8.8 separated by a mere 1.4 arc-seconds – normally a test for a 5 or 6-inch instrument. I had resolved it with an exceptional Takahashi FS-128 on previous occasions, but a wonderful FS-102 had provided only a questionable result. With seeing conditions rated a mediocre “6” on a scale of 10 and the 3.5mm Nagler providing 233x, the Tak clearly revealed the tiny companion nestled in the reddish M-class primary star’s first diffraction ring.

Amazing! Lowering the magnification to 163x made the split more difficult but still possible.

Without question, the TSA-102 proved to be an outstanding performer on multiple stars. I’ve yet to see anything better in its aperture range.

Catching the nearly full-phase Venus in the murky western sky, I didn’t have high hopes for a decent view with any telescope. But the TSA-102 delivered a very solid and satisfying image. With only the low-altitude prismatic distortion interfering, there was no other trace of false color on the brilliant yellow-white planetary orb. At 117x, the gibbous phase was clearly defined, and the planet’s limb was rendered dead sharp against the background sky. Boosting the power to 163x in a fleeting period of steady seeing, I could glimpse a brighter polar area and hints of dusky markings.

Saturn, of course, was a much more attractive target, and the ringed planet did not disappoint. Subtle color variations in the rings and orb ranging from pure white to a creamy yellow-tan were easy to discern at 117 and 163x. The Cassini Division appeared absolutely black and razor sharp, and the Crepe Ring was easily visible. The South Equatorial Belt structure was quite prominent, and the dual nature of the dusky polar extremities could be glimpsed. Comparison with a color-pure 6-inch SCT and 8-inch Vixen catadioptric confirmed that the Tak’s color rendition was authentic, and the TSA 102’s image sharpness easily bested that of the larger scopes.

With the moon close to the zenith and near first quarter, the Tak was again put to the test and achieved impressive results. No fringes of spurious color were visible at any magnification, and the stark contrast of light and shadow reminded me of the superb views obtained with Tak’s 4-element FSQ-106 used with its “extender Q” accessory. As with any top-notch APO, the TSA literally “disappeared,” leaving the viewer with the impression of observing from an orbiting spacecraft. The Hyginus Rill, for example, exhibited an almost three-dimensional depth at higher powers, and the mountain peaks in Theophilus stood out in bold relief. In the lunar north, craters Atlas and Hercules were loaded with intricate detail, and Posidonius easily revealed its complex interior. Even at magnifications approaching 300x, there was no evident breakdown in image quality, and the scope’s totally apochromatic performance remained uncompromised. I’ve yet to see any 4-inch refractor that surpasses this level of performance, and most fall well short of the Tak’s abilities.

It also seemed that the TSA was less susceptible to the effects of atmospheric turbulence than scopes of lesser quality or those with a central obstruction. It cut through dicey seeing conditions like the proverbial “hot knife through butter,” permitting some very impressive views while the other telescopes served up images that were comparatively soft and difficult to focus.

As with all 4-inch telescopes, deep-sky observations are limited by the physical size of the clear aperture. The TSA 102’s highly efficient lens coatings and excellent stray light baffling maximize the views by allowing the highest possible light throughput. Differences between the TSA and other 4-inch APO’s are, however, minimal. From extensive past experience, I believe that the Tak FS-102 fluorite doublet does render a slightly brighter image, but any significant difference is hard to notice.
When put to the test, the Tak triplet produced the sought-after “diamond dust on black velvet” effect on open star clusters such as M 35, M 37, and the Double Cluster in Perseus at any and all magnifications. The stygian background and stellar sparkle and intensity made for a very satisfying observing experience.
The Great Orion Nebula, despite the scope’s limited light grasp, was a glorious tangle of filaments at 74x using an 11mm TeleVue Type 6 Nagler. With the power upped to 163x, the “E” and “F” stars in the Trapezium became clearly visible. Certainly, the TSA is capable of delivering everything one could possibly want from a 4-inch telescope, with additional aperture being the only recourse in obtaining better deep-sky performance.

It is always a bit of a risk to compare telescope brands, as loyal followers are naturally prone to support their own favorites. I’ve learned through dozens of “A – B” comparisons that there is little discernible difference in the performance of top-of-the-line APO refractors. Factors such as eyepiece choice, seeing conditions, and individual differences and peculiarities in eyesight are often much more of a factor. Then too, the telescope’s focal ratio and potential use for visual, photo, or ccd applications is a powerful determiner. The recent improvements in optical design, fabrication, and (hopefully) quality control allow a myriad of fine choices.

In my own opinion, the Takahashi TSA-102S is the consummate visual 4-inch refractor. With its f/8 focal ratio, false color is nonexistent, and other aberrations are beyond detection. Image sharpness and contrast is better (at least by a small degree) than that of any ED doublet telescope, the AP Traveler, TV NP101, and WO ZS110. Tak’s own FS-102 fluorite (now discontinued) is very close, but falls a bit short in color correction. Only the Tak FSQ-106 is its full equal.

However, for those who wish to do extreme wide-field visual observing or imaging, the shorter focal ratio of the Traveler and NP101 may be a better choice, though the TSA-102 can be configured with an optional focal reducer. Some very fine ED doublets from Vixen , Stellarvue, and TeleVue offer a viable lower-cost alternative.

After more than a dozen observing sessions with the Tak TSA-102, direct comparisons with other telescopes, and considering the opinions of knowledgeable observing buddies, I’m fully convinced that the telescope has taken APO performance to the next level. How could it be improved? Perhaps a rotatable dual-speed focuser could be made standard and the price of “must have” accessories reduced a little. As to the optics, it’s pretty difficult to improve upon perfection.