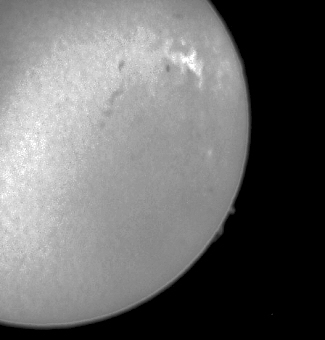 [ARTICLEIMGR="1"]As a long-time solar observer, I was knocked off my feet three years ago while visiting Highpoint Scientific in Montague, New Jersey. They had a Coronado ASP-60 H-alpha filter on a TV-76. One look was all it took to convince me I could not live another day until I had such a filter for myself. I called Coronado, and four months later I had a Solarmax 40 filter of my very own.

Of course, it then proceeded to rain for two months afterwards, but once that cleared up I tried as many scope arrangements as my budget would allow. The filter took up residence on my TV-76, a Borg Mini-50 and finally came to rest on a Takahashi FS-60C that I had gotten on Astromart. All was well in the world...or so I thought.

Then came the PST.

I saw this "cheap" H-alpha filter at NEAF this past spring and was considerably less than enthused. This example of PST quality proved to be the exception. A member of my club purchased a PST for his own use after looking through my SM40/Tak 60 combo and we got together one mostly cloudy afternoon for a shootout.

I was amazed at how little the PST gave up to the SM40 in terms of surface detail. The SM40 won out in terms of fineness of detail on plage and filaments, but the PST was a marvel at teasing out details in the prominences at a higher power and brightness than my SM40 was capable of. Plage was visible in fairly quiet regions if one strained to see it, but the spiculation was just silly with detail.

My friend reminded me that the PST was designed to stack an SM40 on top of it. I said that if it offered a substantial improvement, I would have to shell out some money. My friend adjusted the tuning ring and just looked through it in silence, completely deadpan.

"Looks like you're going to have to spend five hundred bucks'" he replied.

The stacked PST brings out the best in both scopes. When properly tuned, prominences are still gorgeous, but the surface detail just jumps out at you like Jason with an enormous butcher knife. The disk looked three-dimensional. Previously unseen plage leapt into detail with a profusion of filaments that were simply not visible in either scope or filter alone.

I now have a PST of my own, and the SM40 takes up residence on the front of it whenever possible. I like the idea of having some freedom in my observing. If I want to go in at higher power on prominences, the PST is used as is, either with the included Cemax 12mm eyepiece (shipped with the PST for a short time)or a 9mm UO ortho. When I want to see the whole disk in the sweet spot, I use a 15mm TV plossl. The combination of the two filters does result in a sweet spot, where the center of the FOV is amazing in detail and then tails off as one approaches the edge of the disk. A 15mm eyepiece really puts the whole disk squarely in the sweet spot. A mount with slow-motion controls is really a must for keeping the image there. I use a Borg alt-az slo-mo head and it works like a dream. Since the scope can only be mounted via the two 1/4-20 tapped holes on the bottom of the unit, I made an L-bracket to allow the PST to be mounted on the Borg head.

The image through the stacked PST is a trifle dim, but no dimmer than the view through my SM40/TV76 combo, and massively more detailed. I do need to use the SM40's T-max tuner to shove the secondary ghost image out of the FOV so it does not interfere with viewing. This partially blocks the built-in Sol Ranger finder, but not entirely. I put the sun's image at the bottom center of the Sol Ranger window and then move the scope up to meet the sun. As the image dissapears from the Sol Ranger, it appears in the scope.

So how good is the PST, really? Well, another friend of mine looked through a PST stacked with an SM40 and was so impressed he sold his extensive solar setup based around a 0.3 angstrom bandpass Solar Spectrum filter and bought himself a stacked PST. It's small, it's portable, it's relatively inexpensive and the views are worth a million words. Go get one. Now 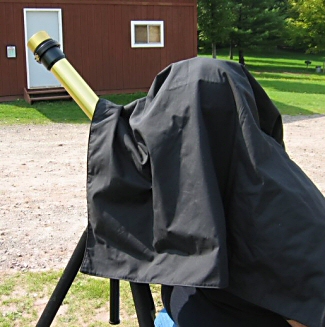