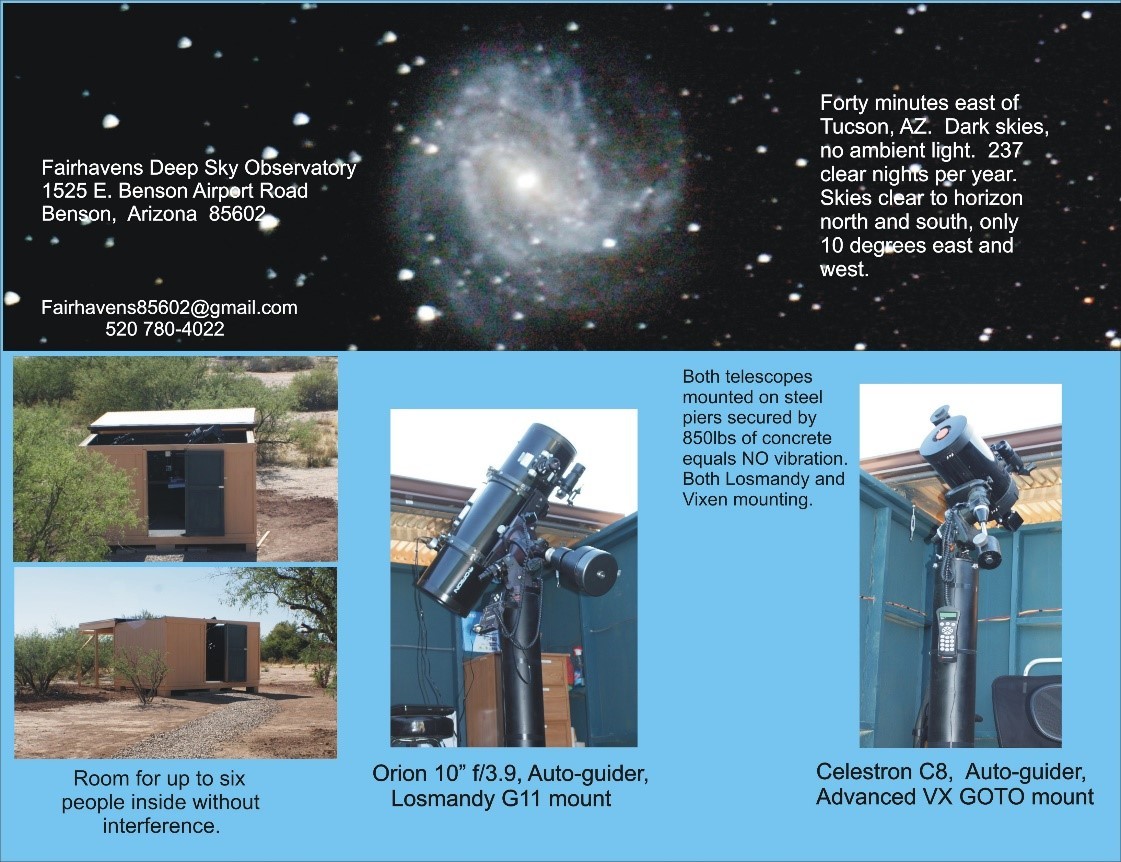 Perhaps at the root of all amateur astronomer’s dreams is to one day have a permanent observatory.  All those hours of driving, setting up equipment, tearing it down at zero-dark thirty can sometimes just suck the joy out of our hobby.

After I retired from Steward Observatory Mirror Lab I wanted just that; my own observatory.  I could afford the equipment, but the years were catching up on me and it had almost become a necessity without downsizing all the equipment I had worked so hard and saved to acquire.

At that particular time I had completed a thirty-year military career, a BS, and nearly ten years at the Mirror Lab.  The wife and I had bought a beautiful home in the suburbs as a retirement home, and everything seemed stable.  Then I got the “bug”.

Shortly after, we sold our home in Tucson and bought a few acres close to a small desert town some forty miles east of Tucson.  It already had a good well and a nice, but small, mobile home.  It never occurred to me that I was nearly sixty-five years old at the time.  All I could see was my own observatory and beautiful night skies to explore.

This is the story of how “Fairhavens” (the name of my observatory) came to be.  My life style was never one that required planning:  It was a reactionary type of life.  As an enlisted soldier I only followed somebody else’s plans and ideas.  But now I was in the situation that I had to actually plan.

Already having most of the gear I needed, the building took priority.  I split the project into segments.   I did minimal research on the land and found out that every year during the Arizona monsoon season the water would run up to eight inches deep across my property.  The  easiest solution of pouring a flat slab certainly wasn’t going to work, so I decided to construct an elevated floor to stay above the flood waters.  Of course, that necessitated a permanent mounting for the two piers I wanted.  The dimension of the footprint would be ten feet by twelve feet with a roll-off roof.  I simply laid out some 2 x 4’s as a rough reference.  The plan being that I would then dig holes at the location for each pier and use rebar and concrete to support the piers and dug the holes. 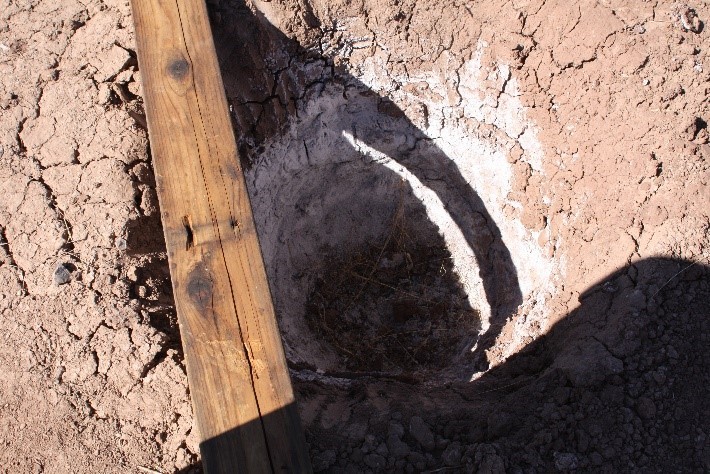 I visited a scrap metal yard in Tucson and acquired a pair of six foot long ¼” thick, 6 inch diameter used well casings.  I had circular ½”, 12” diameter plates welded to one end of the pipe.  At that point I had no idea how long those pipes would have to be to attach the telescope mount at the proper height so I left them longish.  It was essential to keep the piers vertical while pouring the concrete so I fashioned a “jig” to hold them steady. 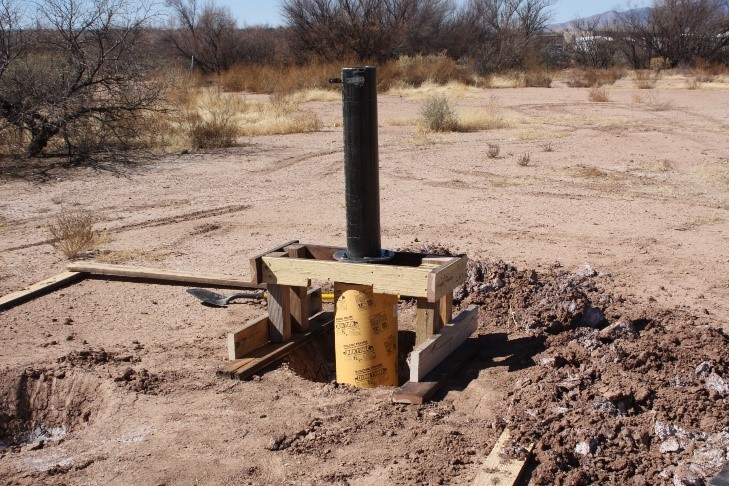 After completing the mounting concrete base, the piers were mounted, measured, cut to proper height, and had flanges welded on top so the telescope mounts could be adjusted for accuracy. 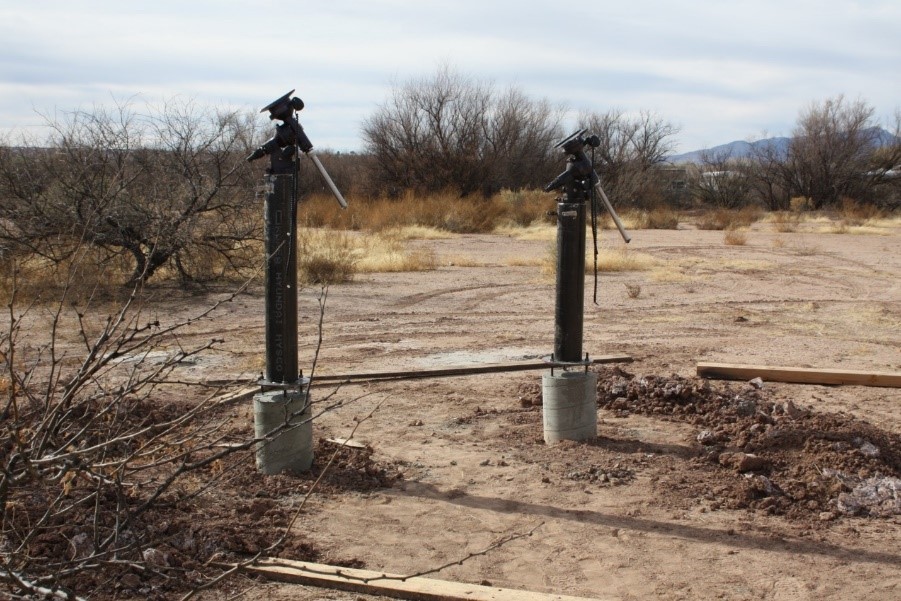 Keeping the piers vertical would be a problem.  I remembered one of the lessons pounded into my Infantry brain back at the lab that three points forms a plane.  So, I had three ¾” holes drilled exactly 120 degrees apart in the bottom flange.  I then used ¾” 24” long J bolts fastened to the plates and extending down into the hole where they would be secured by concrete and rebar.

I had two piers placed where I wanted them with three anchor bolts to adjust their vertical aspect.  Now I needed to work on the actual floor of the observatory.  I decided on a subfloor leveled on concrete blocks.

NEXT CAME THE FLOOR 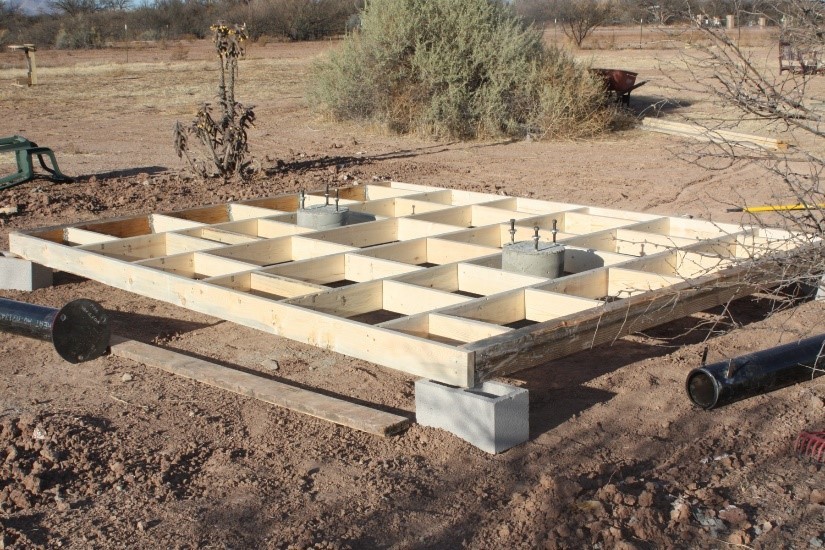 The subfloor was covered with two layers of ¾” CDX plywood 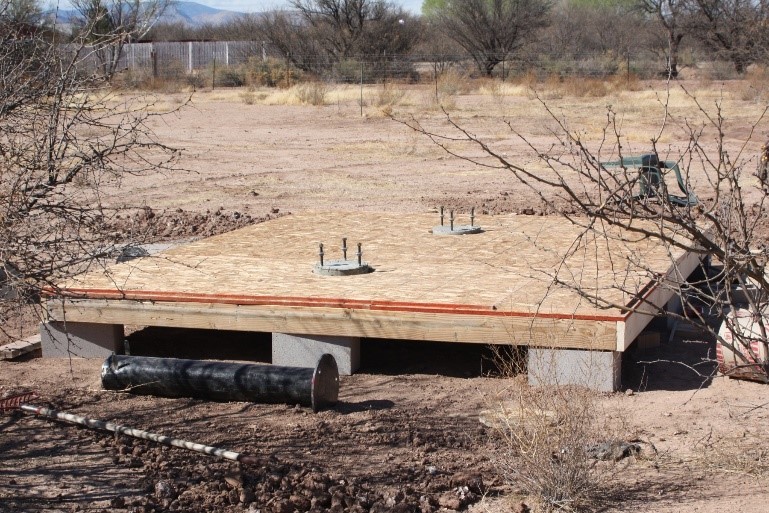 As is evident from the picture, the 24” J bolts extended up from the concrete base to the base flange could then be adjusted.  The holes in the floor to allow the concrete to extend above the floor level had a ½” spacing so vibration from the floor would not be transmitted to the piers.  It should be noted that each pier base consisted of 9 yards of hand mixed concrete honeycombed with 24 feet of 5/8ths inch rebar.  Clearly, they were not going anywhere!

NOW IT WAS TIME FOR THE WALLS

Now it was time to start on the walls.  I used standard 2x4 framing techniques and drilled holes to accommodate wiring later. 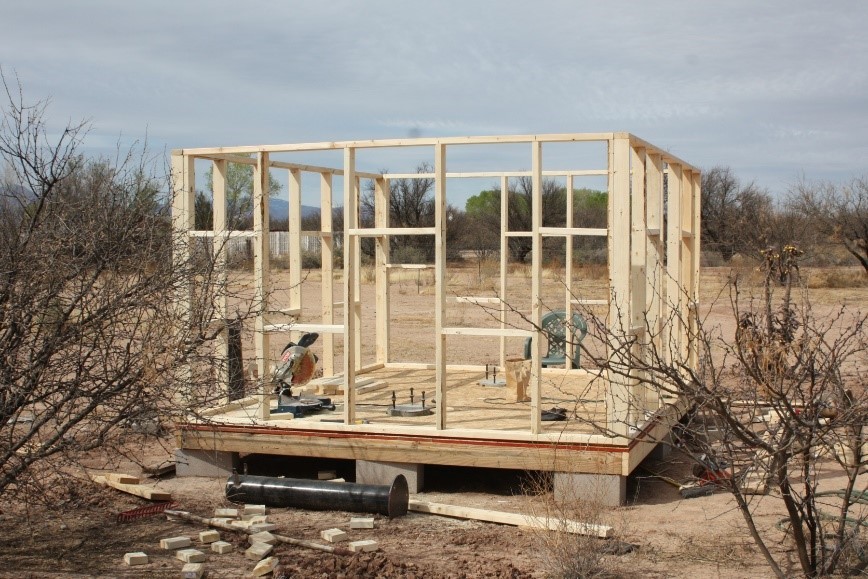 I used 5/8th “ T111 siding that was fastened by screws to the framed walls. 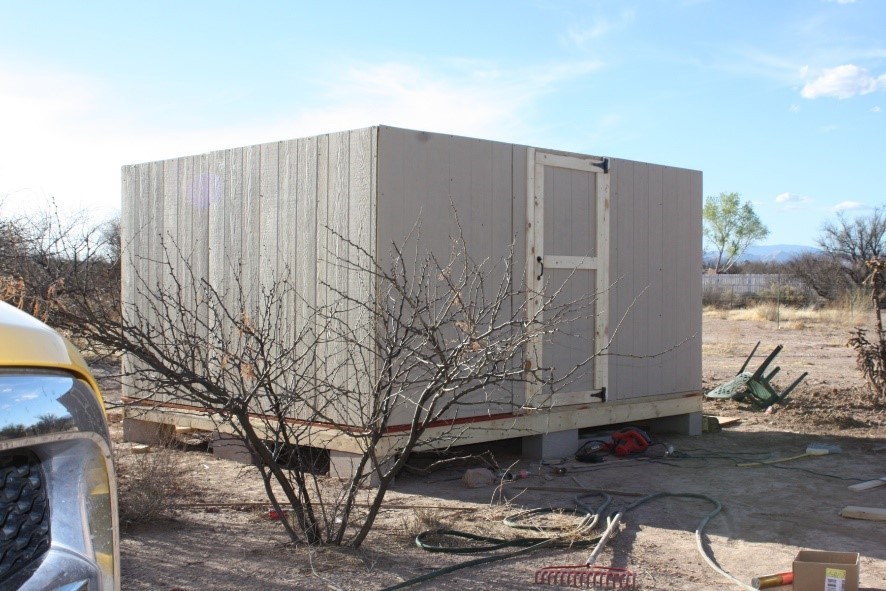 Next came the most difficult aspect of the building: the roof.  Since I intended to have a roll-off type roof I had doubled the header for the frame wall using liquid nails and screws to hold the top two header boards together.  The top header board was 2x6”.  The cost of 4x6” straight lumber was prohibitive so I constructed my own by bonding two 2x4’s together. 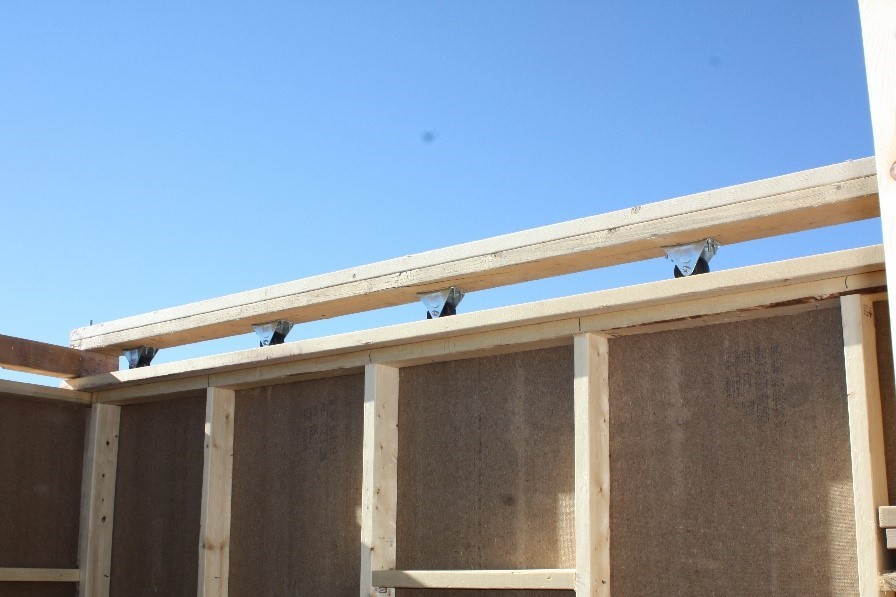 At this point I made my first BIG error.  I should have paid for the 4x6 beams.  Second, I should have used 90 degree angled runners and steel wheels.  In stead of the rubber wheels and “C” channel.

My design proved to be a major problem once the roof was built.  Not being an engineer, I had not factored the weight of the roof which was way too much for the type roller system I used.  I later replaced the steel channel with upside down 90 degree rail and replaced the rubber wheels with steel ones.  That alone would have been a nice correction except it changed all the measurements.  Essentially, I started over.

The last major building structure was the support system for the open roof.  Again, I had used the wrong steel channel and replaced it with the angle.  All of the height measurements were changed less than one inch, which proved to be a real problem. 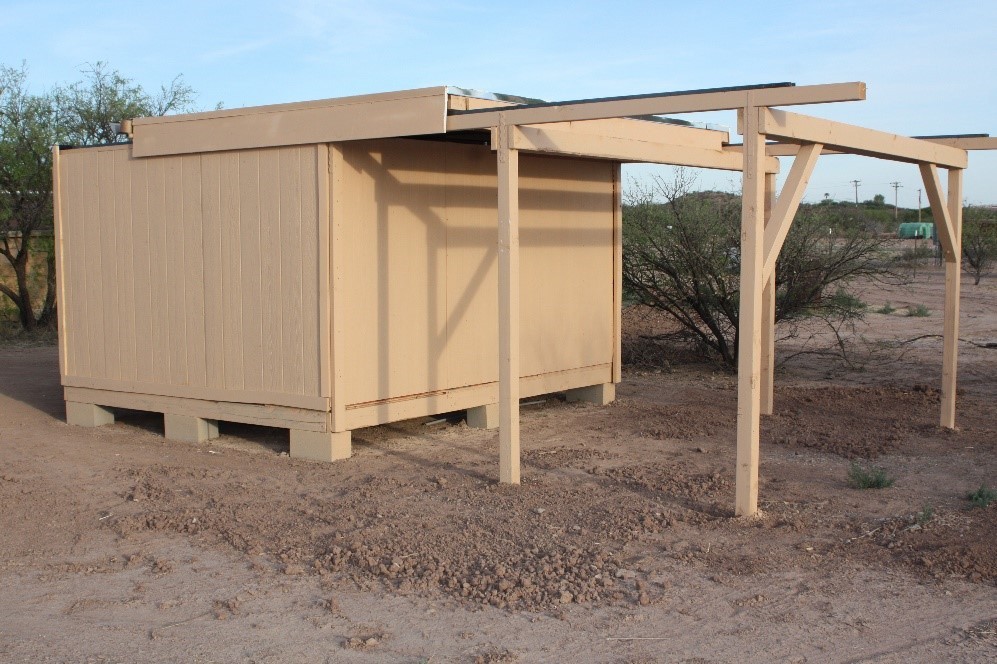 It was now time to populate the structure.  Over the next few years I had a variety of telescopes that kept me occupied.

VARIOUS TENENTS OVER THE YEARS 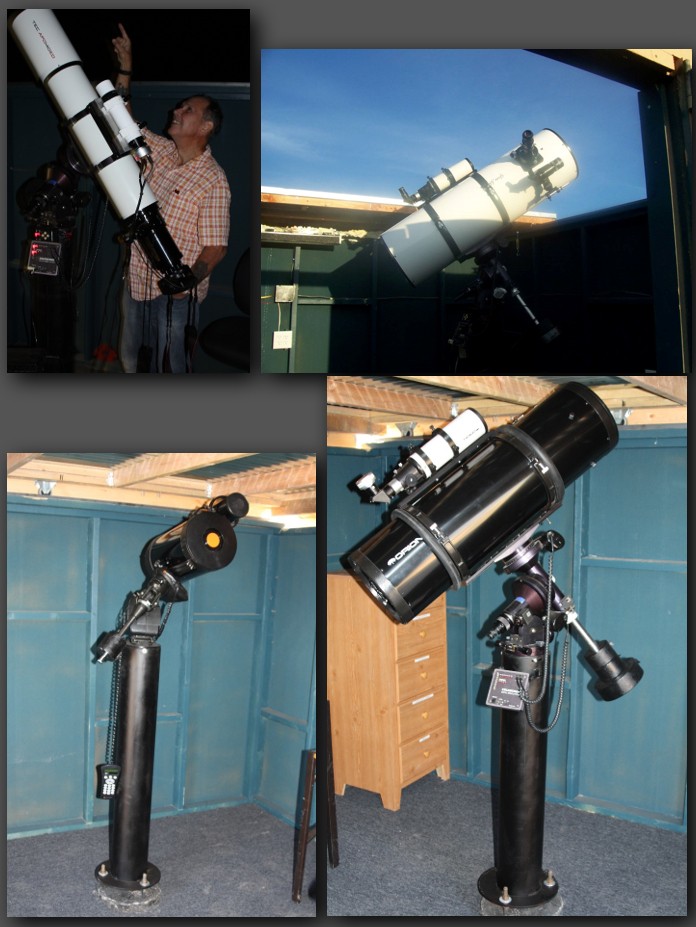 A short time later, my wife of 50 years suffered kidney failure and needed a transplant.  I sold all of my equipment and property and moved back into town to the very neighborhood we left in the beginning.  So, I am downsizing to an AVX and smaller scope.  A sense of humor really helps.