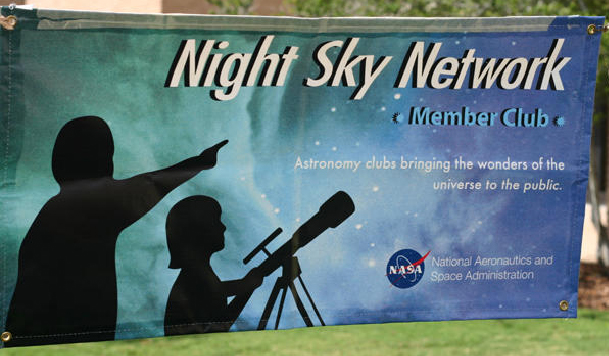 Under the aegis of NASA’s Night Sky Network, the Brazos Regional Astronomy Service Society (B.R.A.S.S.), which is headquartered at Blinn College in Bryan, TX, organizes outreach activities to bring astronomy to the public.

A general theme of such outreach is to periodically hold solar, lunar, planetary and deep sky public viewing sessions in and around the Bryan-College Station area. A typical methodology to organize such an event is to piggyback it onto another main event which is in no way associated with astronomy, to ensure decent public turnouts. On October 7, 2006 we organized a solar viewing event at the Brazos Valley Museum of Natural History in Bryan, TX, by taking advantage of the Brazos Heritage Fair at that location. Because admission to the museum was free that day, we were assured of a decent turnout by both kids and adults.

Professor Utley and I, with the help of Blinn astronomy student volunteers set up several scopes, notably an 8” dobsonian and a 10” dobsonian equipped with full aperture type 2+ glass solar filters, a C8 ultima equipped with a full aperture type 2+ glass filter, a PST, a Solarmax 70 H-alpha telescope and a 90 mm f/11 achromatic refractor equipped with a Solarmax 40 mm H-alpha filter and BF-10 blocking filter right outside the Museum. We would ask people who walked by if they would like to view our sun through a telescope.

Some people declined, but most were interested enough to come over. In addition, kids would need no coaxing to see what was going on. They just let their natural curiosity overcome themselves and would run over. Most people would ask us if it was safe to see the sun through the scopes. This allowed us to explain that the filters cut the intensity of the sun’s rays to very low levels and it was perfectly safe to look through the scopes at the sun.

Before going to the scopes, we would take people over to the Sunspotter projection system, to see an image of the sun projected on a white background. Invariably most people would say…”It looks like that white background needs to be cleaned. I can see some dark dust specks.” or some variation of this. We would then say that what they were looking at was not dust specks, but sunspots on the sun’s surface. Most people would be shocked at this and say, “Really? Sunspots? Through that little projection system?”

We would then ask them to note the positions of those sunspots relative to each other (there were two major sunspots visible) and then walk them over to the C8 or one of the dobs. We would then show them the sun through the C8 or the dobs, and ask them what they were seeing. Most people would look for a few seconds and say, “Well…there’s this round yellow ball and I see dark specks on the yellow ball.” When we asked them to compare the positions of those dark specks with the positions of the dark specks seen on the sunspotter, it was almost as if you could see the realization hitting them. “Ohhh…I see. Then those are the sunspots that we saw over there on the projection system. Cool!!” We then would give them some idea of approximately how big those sunspots were by telling them the diameter of the solar disc. “Why that’s almost as big as the earth. That’s amazing.” or some such variation of an answer would be invariably uttered by most people.

Then we would take them over to one of the H-alpha scopes and show them the sun. The first question invariably would be, “Why does the sun appear red here?” Followed less frequently by, “What’s that short arc-like projection off the red ball? (Or some other variation)”, followed even less frequently by, “What’re those two long curving dark lines on the red ball?” We’d then explain to them that this was a special scope which allowed only a very narrow region of the sun’s light to pass through, and that region was in the deep red region which is why the sun’s disk appears red through these scopes. We’d tell them that the short arc-like projection at the sun’s limb was a solar prominence which is comprised of hot plasma ejected from the surface and falling back onto the surface.

We’d tell them the long dark lines were filaments on the sun’s surface. We’d ask them to continue looking through the scope at the sun’s disk carefully and tell us if the sun’s surface was smoothly red or not and if they could see anything else on the surface. Most people after a few seconds would say “Wait….I see a parchment paper like surface, almost as if there are little red bumps all over”.

Pretty soon the word about, “Those astronomy guys with the sun scopes” spread and we had a bunch of people wanting to see what the fuss was about. We had short lines forming at the scopes, and kids eagerly jumping up going, “Show me. Show me”. In all we had over 300 people line up to look through the scopes at our sun. Several people were interested in joining the astronomy society, and provided us with their email information to be kept apprised of future outreach events. Star charts originating from NASA Night Sky Network locating distant worlds and black holes were also distributed.

Some parents asked us how much the scopes and filters cost, and where they could be purchased. We told them that if they or their kids were interested in learning more about astronomy, to come these outreach activities. We tried to advise them to avoid the scopes at the department stores, and to just take their kids out at night with sky charts and learn and teach them about constellations and asterisms, and get to know their way around the night sky, come to club meetings where there would be observing sessions, and avoid purchasing equipment right away. We told them that the local libraries stocked several beginners’ guides to astronomy and that reading these with their kids would be a much better start into this wonderful activity.

As a bonus, we were also able to show several people the sun in H-alpha on a computer screen using a webcam and the Solarmax 70 scope. Several kids clearly saw what we were talking about in terms of prominences, rice grain surface structure, filaments, etc.

All in all this was a wonderful event to share our love of astronomy with the general public. If you think about it, most of those people will have only that one opportunity in their entire lives to see the sun in H-alpha. However, even if only one of those many people falls in love with astronomy and joins the amateur astronomy community, or perhaps even grows up to become a professional astronomer, our efforts will have been fully successful.

The authors (Dr. Anjal Sharma and Prof. Dennis Utley) have no financial interest in any of the scopes or equipment manufacturers mentioned in this article. We thank NASA for maintaining and promoting outreach activities through the Night Sky Network. Our thanks go to Blinn astronomy student volunteers, Kristen Sikorski, Harmony Linder, Cindy Vargas, Carolyn Barrentine, Alexandria Boyd, Lauren Rawlings, Ryan Taylor and Andrew George for help with the event. The authors thank astromart for this opportunity to share our experiences with astronomy outreach activities with the amateur astronomy community.