Things you have to believe to be a Republican today:

1. Being a drug addict is a moral failing and a crime, unless you're a
conservative radio host. Then it's an illness and you need our prayers
for your recovery.

2. The United States should get out of the United Nations, and our
highest national priority is enforcing U.N. resolutions against Iraq.

3. Government should relax regulation of Big Business and Big Money
but

crack down on individuals who use marijuana to relieve the pain of
illness.

4. "Standing Tall for America'" means firing your workers and moving
their jobs to India.

5. A woman can't be trusted with decisions about her own body, but
multi-national corporations can make decisions affecting all mankind
without regulation.

6. Jesus loves you and shares your hatred of homosexuals and Hillary
Clinton.

7. The best way to improve military morale is to praise the troops in
speeches while slashing veterans' benefits and combat pay.

8. Group sex and drug use are degenerate sins unless you someday run
for governor of California as a Republican.

9. If condoms are kept out of schools, adolescents won't have sex.

10. A good way to fight terrorism is to belittle our long-time allies,
then demand their cooperation and money.

11. HMOs and insurance companies have the interest of the public at
heart.

13. Global warming and tobacco's link to cancer are junk science, but
creationism should be taught in schools.

16. Government should limit itself to the powers named in the
Constitution, which include banning gay marriages and censoring the
Internet.

17. The public has a right to know about Hillary's cattle trades, but
George Bush's driving record is none of our business.

18. You support states' rights, which means Attorney General John
Ashcroft can tell states what local voter initiatives they have a right
to adopt.

20. Trade with Cuba is wrong because the country is communist, but
trade with China and Vietnam is vital to a spirit of international
harmony.

22. If you say something over and over again it is the truth no matter
how obvious a lie it is.

23. It's good policy to give large government contracts to U.S.
companies who
register off-shore to avoid paying taxes.

24. John Ashcroft does not belong to a fanatic religious group.

25. The best way to prevent forest fires is to cut down all the
forests.

26. Give the wealthiest 5% of the people the largest tax breaks and
the

rest the least. This is a democracy and the majority of the people
should
pay it's cost.

27. George Bush has not made a mistake as President. However, given a
day to think about it he may be able to come up with one.

28. John Ashcroft could have beaten Mel Carnahan for the Senate seat
from Missouri if Mel hadn't died the month before.

"Beware the leader who bangs the drum of war in order to whip the citizenry into
a patriotic fervor. For patriotism is indeed a double-edged sword.
It both emboldens the blood, just as it narrows the mind."
...Julius Caesar 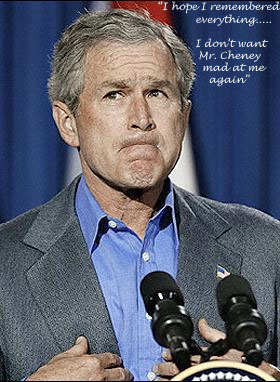