100th Anniversary of the Tunguska Event - Are We Any Better Prepared Today? 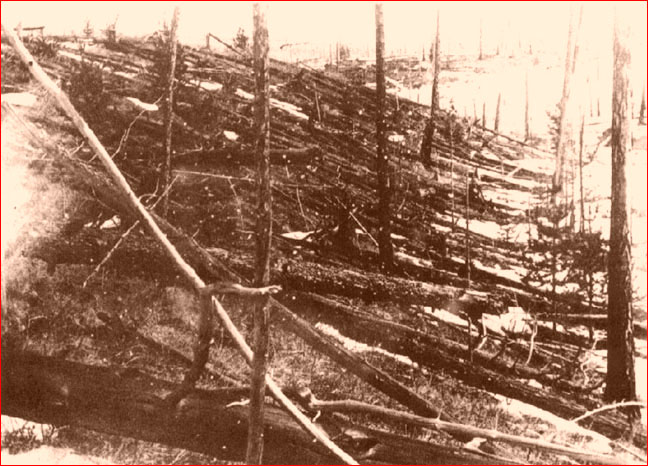 It exploded over Siberia – this object from space – and leveled 2,000 square kilometers of forest, flattening pine trees like matchsticks. June 30 marks the 100th anniversary of the Tunguska event, the day in 1908 when an asteroid or comet entered Earth’s atmosphere and, in effect, fired an astronomical warning shot across our bow. How prepared is Earth today to avoid disaster from the skies?

The fireball that laid waste a vast swath of forest near the Podkamennaya Tunguska River in Russia was most likely an asteroid or comet that exploded before it reached the ground. Such an explosion today over New York, Paris or Beijing could level the entire city, killing millions.

Recent scientific studies have downsized the object responsible for the Tunguska cataclysm, increasing the chances that such an impact could occur in the future since smaller asteroids far outnumber the larger ones that orbit near Earth.

The dangers our planet faces from near-Earth objects (NEOs) are the focus of The Planetary Society's new program, Target Earth. The effort includes the Apophis Mission Design Competition; a campaign to save the Arecibo telescope’s radar tracking of NEOs; and the newest call for proposals for the Society’s Gene Shoemaker Near-Earth Object Grants.

“We live in a busy solar system,” said Louis Friedman, Executive Director of The Planetary Society. “Finding and tracking all the NEOs that might intersect Earth’s orbit beats yelling, ‘Duck!’ when the next impactor comes our way.”

Today – unlike 100 years ago – we can spot incoming objects and determine their orbits to learn if any might be on its way to collide with Earth. To that end, The Planetary Society created the Gene Shoemaker Near-Earth Object Grant program to support amateur observers, observers in developing countries, and professional astronomers who, with seed funding, can greatly contribute to NEO research.

After pioneering scientist Gene Shoemaker’s death in 1997, The Planetary Society created the program in honor of Shoemaker, a man who led the study of impact structures and advocated stepped-up NEO discovery and tracking programs. To date, the Society has awarded 29 Shoemaker NEO Grants, totaling more than $184,000, to observers around the world.

Shoemaker NEO Grant winners have contributed tens of thousands of observational measurements used to define the exact orbits of NEOs to help determine if they are a threat to Earth. They are also helping to understand the physical characteristics of NEOs, which will be critical for any future efforts to deflect them from striking Earth.

Astronomers have already discovered that one asteroid, named Apophis, will pass closer to Earth in 21 years than our geosynchronous communications satellites, and its trajectory has a small probability of taking it on a collision course with Earth seven years after that. The Planetary Society awarded $50,000 in an Apophis Mission Design contest for the best idea for tagging a potentially hazardous asteroid, marking it in some way that it could be better tracked.

If an object is known to be dangerous decades before it will impact Earth, humanity will have the chance to alter the object's course and the planet's destiny.

"We can't afford to remain ignorant of a dangerous object that might be headed our way in 20, 30, or even 100 years," said Louis Friedman, Executive Director of The Planetary Society. “The lives of millions may be at stake.”

Earth orbits the solar system in a swarm of NEOs. Tracking these objects by radar is an ideal way to precisely know the probability of impact, and the Arecibo radiotelescope is the most powerful instrument for the job. However, Arecibo currently faces closure by the National Science Foundation due to lack of funds, and The Planetary Society joins its voice to many from the science community, urging Congress to reinstate the telescope's budget.

Over the past few years, our knowledge of NEOs has greatly increased as researchers have discovered and tracked many comets and asteroids that travel through our neighborhood of space. The Planetary Society has funded several NEO researchers through its Gene Shoemaker grant program. Still, many more objects remain to be found, and the orbits of many known objects need to be better refined.