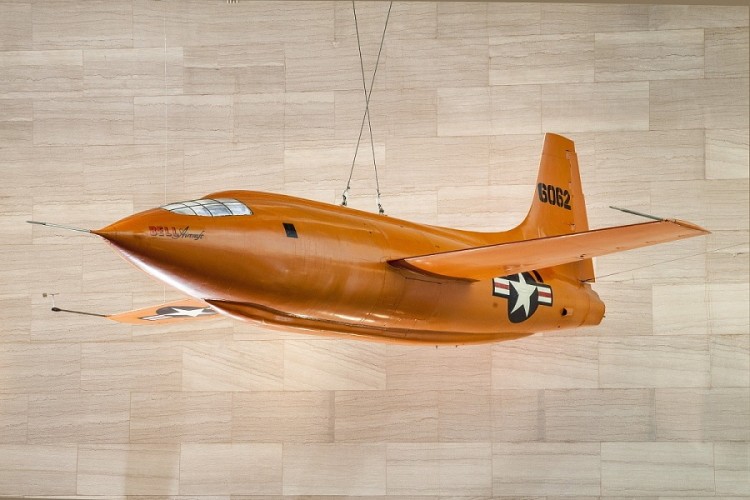 Chuck Yeager was born in 1923, in Myra, West Virginia. He enlisted in the Army Air Corps in September 1941, was accepted for pilot training under the flying sergeant program in July 1942, and received his pilot wings and appointment as a flight officer in March 1943 at Luke Field, Arizona.

During World War II, Chuck Yeager distinguished himself in aerial combat over France and Germany during the years 1943-1945 by shooting down 13 enemy aircraft, five on one mission, including one of Germany's first jet fighters. On March 5, 1944, he was shot down over German-occupied France but escaped capture when elements of the French Maquis helped him to reach the safety of the Spanish border.

He returned to the United States in February 1945 to attend the instructor pilot course after which he served as an instructor pilot. In July 1945 he went to Wright Field, Ohio, where he received his first experimental flight test work. His assignment there led to his selection as pilot of the nation's first research rocket aircraft, the Bell X-1, at Edwards Air Force Base, California, where he served from December 1949 to September 1954.

Chuck Yeager made world history on October 14, 1947, when he became the first man to fly faster than the speed of sound.

In 1946, two X-1 experimental research aircraft (originally designated XS-1s) conducted pioneering tests at Muroc Army Air Field (now Edwards Air Force Base) in California to obtain flight data on conditions in the transonic speed range. The X-1 was the first high-speed aircraft built purely for aviation research purposes. The model was never intended for production. The X-1 was designed largely in accordance with specifications provided by the National Advisory Committee for Aeronautics (NACA) (Now NASA), paid for by the Army Air Force, and built by Bell Aircraft Inc. The X-1 #2 (serial number 46-063) was flight tested by NACA to provide design data for later production high-performance aircraft.

The research techniques used in the X-1 program became the pattern for all subsequent X-craft projects. The NACA X-1 procedures and personnel also helped lay the foundation of America's space program in the 1960s. The X-1 project defined and solidified the post-war cooperative union between US military needs, industrial capabilities, and research facilities. The flight data collected by NACA in the X-1 tests then provided a basis for American aviation supremacy in the latter half of the 20th century.

As a result of the X-1's initial supersonic flight, the National Aviation Association voted its 1948 Collier Trophy to be shared by the three main participants in the program. Honored at the White House by President Truman were Lawrence "Larry" Bell for Bell Aircraft, Captain Charles E. "Chuck" Yeager for piloting the flights, and John Stack of NACA.

Yeager  returned to Europe in October 1954 and became commander of the 417th Fighter Squadron at Hahn Air Base, Germany, in May 1955. He remained in that position when his squadron was reassigned to Toul-Rosieres Air Base, France, in April 1956.

Chuck Yeager graduated from the Air War College, Maxwell Air Force Base, Alabama, in June 1961 and became commandant of the Aerospace Research Pilot School, where all military astronauts are trained, in July 1962.

Chuck Yeager assumed command of the 4th Tactical Fighter Wing at Seymour Johnson Air Force Base, North Carolina in February 1968 and went with the wing to Korea during the Pueblo crisis. In July 1969, Brigadier General Yeager became vice commander, Seventeenth Air Force, with headquarters at Ramstein Air Base, Germany. In January 1971 Yeager assumed duties as United States defense representative to Pakistan. He reported to the Air Force Inspection and Safety Center at Norton Air Force Base, California, in March 1973 and became director of the center in June 1973.

Chuck Yeager flew more than 10,000 hours in more than 361 different makes and models of military aircraft all over the world. In addition to the Collier Trophy, which he received for breaking the sound barrier, he was awarded the MacKay Trophy in 1948 and the Harmon International Trophy in 1954.