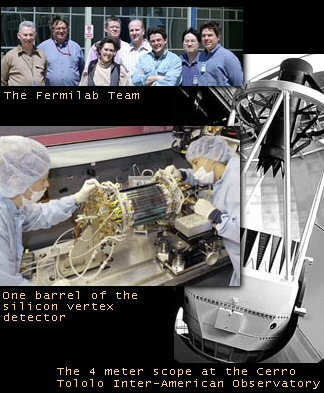 Dark energy comprises about 70 percent of the universe and is responsible for the surprisingly accelerating expansion of the universe, yet it is one of the biggest mysteries facing science today.


Harvard physicist Andy Foland (in protectivce gear on left) and Fermilab technician Bert Gonzalez (on the right) work on one of three barrels built at SiDet for the CDF Run IIa silicon vertex detector. The techniques used in building the barrels are similar to those needed to build the Dark Energy Camera.
Fermilab is part of a collaboration proposing an ambitious new experiment to measure the properties of dark energy. If approved, the Dark Energy Survey would measure the history of the expansion rate of the universe more precisely than ever before, using the largest camera ever built with Charge Coupled Devices (CCD). The 500 megapixel Dark Energy Camera would be placed on an existing 4-meter telescope located in north-central Chile at the National Optical Astronomy Observatory's Cerro Tololo Inter-American Observatory.

"We don't know if the dark energy is some new kind of 'stuff,' and if so what kind it is, or if something strange is going on with gravity," said Josh Frieman of Fermilab and the University of Chicago's Astronomy Department, a collaborator on the proposed DES. "The only way we really have to probe the properties of the dark energy is to make much more precise measurements of the history of the expansion rate of the universe."

The DECam together with the CTIO 4-meter telescope will allow for a survey of 15 percent of the sky to light levels faint enough to measure the colors of galaxies at redshift one. The redshift of an astronomical object generally increases with distance. The farther the objects observed, the farther the look back in time. By surveying the sky out to redshifts of one, the DES will measure the expansion rate as it has evolved over two-thirds of the total age of the universe.


The 4 meter telescope located at the Cerro Tololo Inter-American Observatory will be used in conjunction with the Dark Energy Camera to measure the properties of dark energy. The Dark Energy Survey collaboration proposes to build a new instrument to replace the current prime focus cage, which would include the 500 megapixel, one-half-meter-diameter DECam, the largest CCD camera ever built. - Photos credit NOAO/AURA/NSF

The DES would use four independent methods to probe dark energy:

A galaxy cluster survey, where photometric redshifts will be measured for 30,000 galaxy clusters
Weak gravitational lensing, which measures the effect of the universe's matter distribution on light from distant galaxies
Measurements of 2,000 Type Ia supernovae, whose similar peak brightness allows for good estimates of distance
A galaxy angular power spectrum study, whose angular size features allow for good estimates of distance.
Each method could stand alone as a probe of dark energy, and each will be by far the best in its class at the time of the DES. By combining the four results, collaborators hope to measure the properties of dark energy to five percent precision.

"This is really our strength," said Joe Mohr of the University of Illinois, DES project scientist for data management. "We'll have four different pieces of information about dark energy, and we can see if the answers are consistent."

Galaxy cluster counting is the primary goal. The DES and the South Pole Telescope will combine their galaxy cluster data to measure the universal expansion rate by determining the number and masses of galaxy clusters as a function of time.

The DES would provide photometric redshifts for approximately 30,000 galaxy clusters. The photometric redshift of a cluster is determined by combining measurements taken through four different filters, each of which "sees" different ranges of wavelengths of light. The SPT survey will use a different technique to determine the masses of about 30,000 galaxy clusters—at least 20,000 of which will also be measured by the DES. SPT cluster masses and DES cluster redshifts together will provide a powerful probe of the universe's expansion rate.

"The DES is a very exciting instrument concept, and a very exciting, interesting and topical concept as well," said Alistair Walker, director of the CTIO. "It really sequences well with what's been going on now and what will happen later with the Large Synoptic Survey Telescope, and even later with the Supernova Acceleration Probe."


The Fermilab Dark Energy Camera team (from left) John Peoples, Peter Limon, Brenna Flaugher, Greg Derylo, Del Allspach, Jim Annis, Huan Lin and William Wester in front of SiDet, where the 500 megapixel CCD camera will be packaged and assembled. - Photo by Deborah Guzman
Fermilab is building on its experience in particle physics and in collaborating on the Sloan Digital Sky Survey in leading the effort to design and build the proposed instrument for the 4-meter telescope. The instrument includes the DECam, a series of focusing lenses, four wavelength filters and the mechanical and electrical interfaces to the telescope.

Brenna Flaugher, deputy at Fermilab's Silicon Detector facility and Camera Project manager for the DES, emphasized that the DECam is a natural fit for Fermilab.

"Building a CCD camera is a lot like building a silicon vertex detector," she said. "They use the same machines and the same technology. We have the infrastructure set up at SiDet and we have a lot of experienced people."

At the heart of the DECam are 60 rectangular (2k x 4k) CCDs, each with 8 million 15-micron pixels. The CCDs, developed at Lawrence Berkeley National Laboratory, are over five times more sensitive at near-infrared wavelengths than conventional CCDs currently used for astronomy. The improved near-infrared sensitivity is critical for the science of the DES, as it allows the survey to obtain galaxy redshifts out to one. The one-halfmeter-diameter DECam will be the first large-scale use of the LBNL CCDs.

Berkeley Lab will ship the CCD wafers to Fermilab, where they will be packaged and assembled in the camera housing. The University of Illinois' high-energy physics group will develop the data acquisition system for the camera. Once the DES instrument has been assembled and tested at Fermilab, it will be delivered to Chile, where CTIO will lead telescope operations and maintenance.

The five-year DES hopes to generate about 100 terabytes of data—over seven times more than current surveys. As the data will be relevant to a wide range of topics in astrophysics, cosmology and particle physics, it will be released to the public at regular intervals. The University of Illinois' high-energy physics and astronomy groups, in cooperation with the National Center for Supercomputing Applications and the University of Chicago, will lead the data processing and archiving effort. The NCSA and CTIO will work to make DES data easily accessible to all interested researchers.

"If we can make the data public in an accessible form, it will be very valuable to lots of other people," said Fermilab's John Peoples, collaborator on the DES.

Since their first collaboration meeting in December, DES researchers have been presenting their idea to laboratories and funding agencies in the hopes of receiving approval by the end of 2004.

"At Halloween last year, we had only an idea," said Annis. At that same time this year, DES collaborators hope to be well on their way to resolving one of the biggest mysteries of the universe.

This article is courtesy of and property of Fermilab News