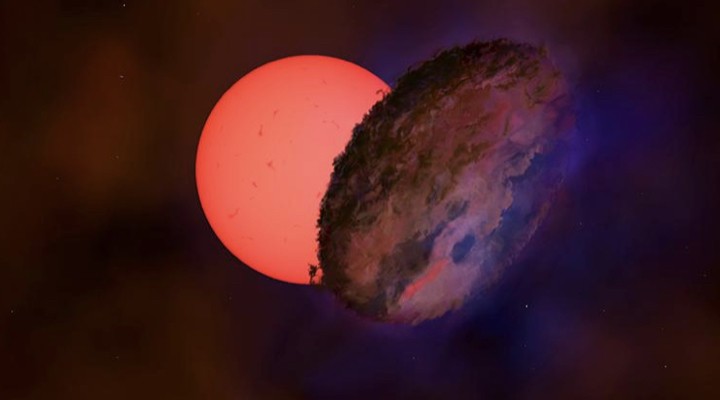 Artist's impression of VVV-WIT-08 -- Is this a new class of ‘blinking giant’ binary star system? Since the star is located in a dense region of the Milky Way, the researchers considered whether some unknown dark object could have simply drifted in front of the giant star by chance. However, simulations showed that there would have to be an implausibly large number of dark bodies floating around the Galaxy for this scenario to be likely. (Image Credit: University of Cambridge, Leigh Smith)

An international team of astronomers observed the star VVV-WIT-08 decreasing in brightness by a factor of 30, so that it nearly disappeared from the sky. While many stars change in brightness because they pulsate or are eclipsed by another star in a binary system, it’s exceptionally rare for a star to become fainter over a period of several months and then brighten again.

The researchers believe that VVV-WIT-08 may belong to a new class of ‘blinking giant’ binary star system, where a giant star ⎼ 100 times larger than the Sun ⎼ is eclipsed once every few decades by an as-yet unseen orbital companion. The companion, which may be another star or a planet, is surrounded by an opaque disc, which covers the giant star, causing it to disappear and reappear in the sky.

“It’s amazing that we just observed a dark, large, and elongated object pass between us and the distant star and we can only speculate what its origin is,” said co-author Dr Sergey Koposov from the University of Edinburgh.

Since the star is located in a dense region of the Milky Way, the researchers considered whether some unknown dark object could have simply drifted in front of the giant star by chance. However, simulations showed that there would have to be an implausibly large number of dark bodies floating around the Galaxy for this scenario to be likely.

One other star system of this sort has been known for a long time. The giant star Epsilon Aurigae is partly eclipsed by a huge disc of dust every 27 years, but only dims by about 50%. A second example, TYC 2505-672-1, was found a few years ago, and holds the current record for the eclipsing binary star system with the longest orbital period ⎼ 69 years ⎼ a record for which VVV-WIT-08 is currently a contender.

The UK-based team has also found two more of these peculiar giant stars in addition to VVV-WIT-08, suggesting that these may be a new class of ‘blinking giant’ stars for astronomers to investigate.

VVV-WIT-08 was found by the VISTA Variables in the Via Lactea survey (VVV), a project using the British-built VISTA telescope in Chile and operated by the European Southern Observatory that has been observing the same one billion stars for nearly a decade to search for examples with varying brightness in the infrared part of the spectrum.

Project co-leader Professor Philip Lucas from the University of Hertfordshire said, “Occasionally we find variable stars that don’t fit into any established category, which we call ‘what-is-this?’, or ‘WIT’ objects. We really don’t know how these blinking giants came to be. It’s exciting to see such discoveries from VVV after so many years planning and gathering the data.”

While VVV-WIT-08 was discovered using VVV data, the dimming of the star was also observed by the Optical Gravitational Lensing Experiment (OGLE), a long-running observation campaign run by the University of Warsaw. OGLE makes more frequent observations, but closer to the visible part of the spectrum. These frequent observations were key for modeling VVV-WIT-08, and they showed that the giant star dimmed by the same amount in both the visible and infrared light.

There now appear to be around half a dozen potential known star systems of this type, containing giant stars and large opaque discs. “There are certainly more to be found, but the challenge now is in figuring out what the hidden companions are, and how they came to be surrounded by discs, despite orbiting so far from the giant star,” said Smith. “In doing so, we might learn something new about how these kinds of systems evolve.”