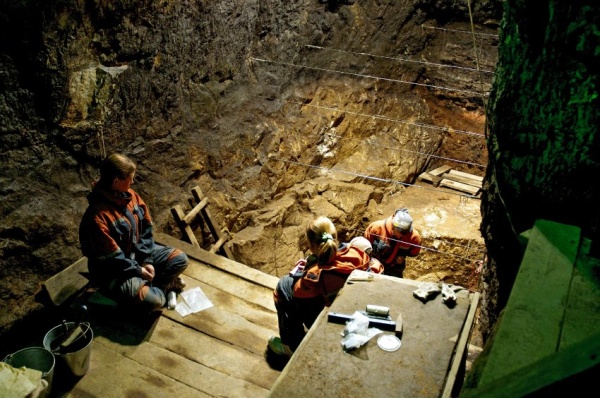 A 30,000-year-old finger bone found in a cave in southern Siberia came from a young girl who was neither an early modern human nor a Neanderthal, but belonged to a previously unknown group of human relatives who may have lived throughout much of Asia during the late Pleistocene epoch. Although the fossil evidence consists of just a bone fragment and one tooth, DNA extracted from the bone has yielded a draft genome sequence, enabling scientists to reach some startling conclusions about this extinct branch of the human family tree called "Denisovans" after the cave where the fossils were found.

The international team of researchers led by Svante Paabo of the Max Planck Institute for Evolutionary Anthropology in Leipzig (Germany) has sequenced the nuclear genome from a finger bone of the extinct hominin that is at least 30,000 years old and was excavated by archaeologists from the Russian Academy of Sciences in Denisova Cave in southern Siberia, Russia, in 2008.

Earlier this year the team showed that the mitochondrial DNA from the finger bone displayed an unusual sequence suggesting that it came from an undescribed ancient hominin form. Using techniques the researchers developed to sequence the Neanderthal genome, they have now sequenced the nuclear genome from the bone. They find that the individual was female and comes from
a group of hominins that shared an ancient origin with Neanderthals, but subsequently had a distinct history. They call this group of hominins Denisovans. Unlike Neandertals, Denisovans did not contribute genes to all present-day Eurasians. However, Denisovans share an elevated number of genetic variants with modern-day Papuan New Guinean populations, suggesting that there was interbreeding between Denisovans and the ancestors of Melanesians. In
addition, a Denisovan tooth found in the same cave shows a morphology that is distinct from Neanderthals and modern humans and resembles much older hominin forms. Bence Viola, a scientist at the Max Planck Institute of evolutionary Anthropology comments: "The tooth is just amazing. It allows us to connect the morphological and genetic information."

David Reich, an Associate Professor at Harvard Medical School who led the population genetic analysis, says: "The fact that Denisovans were discovered in Southern Siberia but contributed genetic material to modern human populations from New Guinea suggests that Denisovans may have been widespread in Asia during the Late Pleistocene."

Svante Paabo of the Max Planck Institute of evolutionary Anthropology remarks: "In combination with the Neanderthal genome sequence, the Denisovan genome suggests a complex picture of genetic interactions between our ancestors and
different ancient hominin groups."

Richard Green of the University of California, Santa Cruz, played a lead role in the analysis of the genome sequence data.

"The story now gets a bit more complicated," said Green, an assistant professor of biomolecular engineering in the Baskin School of Engineering at UC Santa Cruz. "Instead of the clean story we used to have of modern humans migrating out of Africa and replacing Neanderthals, we now see these very intertwined story lines with more players and more interactions than we knew of before."

The Denisovans appear to have been quite different both genetically and morphologically from Neanderthals and modern humans. The tooth found in the same cave as the finger bone shows a morphology that is distinct from Neanderthals and modern humans and resembles much older human ancestors, such as Homo habilis and Homo erectus. DNA analysis showed that the tooth and the finger bone came from different individuals in the same population.

Found in a Siberian cave

The finger bone was found in 2008 by Russian scientists in Denisova Cave, an archaeological site in southern Siberia. Paabo, who had worked with the Russian scientists before, obtained the bone for his research on ancient DNA. In Leipzig, researchers extracted DNA from the bone and sequenced the mitochondrial genome, a smaller DNA sequence separate from the chromosomal DNA and easier to obtain from ancient samples. The results showed a surprising divergence from the mitochondrial genomes of Neanderthals and modern humans, and the team quickly began working to sequence the nuclear genome.

"It was fortuitous that this discovery came quickly on the heels of the Neanderthal genome, because we already had the team assembled and ready to do another similar analysis," Green said. "This is an incredibly well-preserved sample, so it was a joy to work with data this nice. We don't know all the reasons why, but it is almost miraculous how well-preserved the DNA is."

The relationship between Denisovans and present-day Melanesians was a completely unexpected finding, he said. The comparative analysis, which included genome sequences of individuals from New Guinea and Bougainville Island, indicates that genetic material derived from Denisovans makes up about 4 to 6 percent of the genomes of at least some Melanesian populations. The fact that Denisovans were discovered in southern Siberia but contributed genetic material to modern human populations in Southeast Asia suggests that their population may have been widespread in Asia during the late Pleistocene, said David Reich of Harvard Medical School.

It is not clear why fossil evidence had not already revealed the existence of this group of ancient human relatives. But Green noted that the finger bone was originally thought to be from an early modern human, and the tooth resembles those of other ancient human ancestors. "It could be that other samples are misclassified," he said. "But now, by analyzing DNA, we can say more definitively what they are. It's getting easier technically to do this, and it's a great new way to extract information from fossil remains."

In the light of the Neanderthal and Denisovan genomes, a new, more complex picture is emerging of the evolutionary history of modern humans and our extinct relatives. According to Green, there was probably an ancestral group that left Africa between 300,000 and 400,000 years ago and quickly diverged, with one branch becoming the Neanderthals who spread into Europe and the other branch moving east and becoming Denisovans. When modern humans left Africa about 70,000 to 80,000 years ago, they first encountered the Neanderthals, an interaction that left traces of Neanderthal DNA scattered through the genomes of all non-Africans. One group of humans later came in contact with Denisovans, leaving traces of Denisovan DNA in the genomes of humans who settled in Melanesia.

"This study fills in some of the details, but we would like to know much more about the Denisovans and their interactions with human populations," Green said. "And you have to wonder if there were other populations that remain to be discovered."

Is there a fourth player in this story?