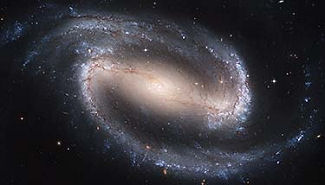 The Hubble telescope captured a display of starlight, glowing gas, and silhouetted dark clouds of interstellar dust in this 4-foot-by-8-foot image of the barred spiral galaxy NGC 1300. NGC 1300 is considered to be prototypical of barred spiral galaxies. Barred spirals differ from normal spiral galaxies in that the arms of the galaxy do not spiral all the way into the center, but are connected to the two ends of a straight bar of stars containing the nucleus at its center.

At Hubble's resolution, a myriad of fine details, some of which have never before been seen, is seen throughout the galaxy's arms, disk, bulge, and nucleus. Blue and red supergiant stars, star clusters, and star-forming regions are well resolved across the spiral arms, and dust lanes trace out fine structures in the disk and bar. Numerous more distant galaxies are visible in the background, and are seen even through the densest regions of NGC 1300.

In the core of the larger spiral structure of NGC 1300, the nucleus shows its own extraordinary and distinct "grand-design" spiral structure that is about 3,300 light-years (1 kiloparsec) long. Only galaxies with large-scale bars appear to have these grand-design inner disks — a spiral within a spiral. Models suggest that the gas in a bar can be funneled inwards, and then spiral into the center through the grand-design disk, where it can potentially fuel a central black hole. NGC 1300 is not known to have an active nucleus, however, indicating either that there is no black hole, or that it is not accreting matter.

The image was constructed from exposures taken in September 2004 by the Advanced Camera for Surveys onboard Hubble in four filters. Starlight and dust are seen in blue, visible, and infrared light. Bright star clusters are highlighted in red by their associated emission from glowing hydrogen gas. Due to the galaxy's large size, two adjacent pointings of the telescope were necessary to cover the extent of the spiral arms. The galaxy lies roughly 69 million light-years away (21 megaparsecs) in the direction of the constellation Eridanus.

For a MUCH larger version of the image, Click Here