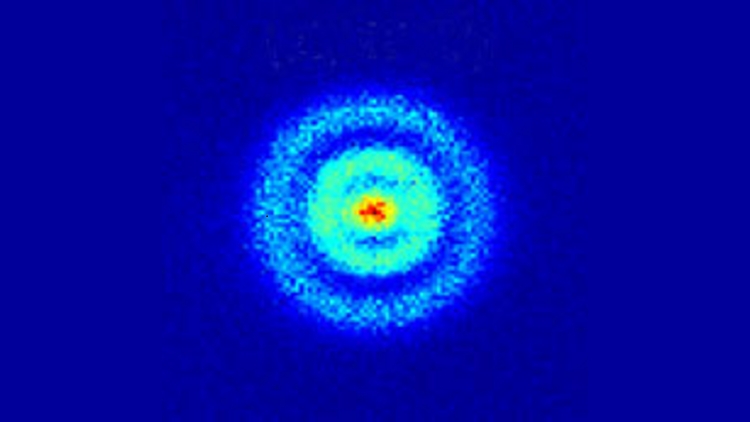 Astronomy is experiencing a golden era. The past decade alone has brought amazing discoveries that have excited people from all walks of life. Revolutionary new ground-based and space-based telescopes that enable us to peer deeper into space and time are announced almost on a monthly basis. But how about direct observations at the other end of the spectrum - the microscopic quantum level? There is exciting work going on there too. This past month, a team of scientists led by Aneta Stodolna of the FOM Institute for Atomic and Molecular Physics (AMOLF) in Amsterdam announced the realization of a "Photoionization Microscope" that for the first time has provided a direct visualization of the orbital structure of a hydrogen atom.

"The development of quantum mechanics in the early part of the last century has had a profound influence on the way that scientists understand the world. Central to quantum mechanics is the concept of a wave function that... describes the probability of observing the outcome of measurements on a quantum mechanical system (such as measurements of the energy or the position or momenta of constituents)," according to the paper published by the AMOLF Team. This wave function "allows reconciling the occurrence of non-classical phenomena on the nano-scale with manifestations and observations made on the macro-scale, which correspond to viewing one of a number of possible realizations allowed for by the wave function. Despite the overwhelming impact on modern electronics and photonics, understanding quantum mechanics and the many possibilities that it describes continues to be intellectually challenging."

Christopher Smeenk of the University of Ottawa states that "The full quantum state is only realized by statistically averaging over many measurements. A tool that directly magnifies the microscopic state of a quantum particle onto the laboratory scale could, potentially, render some quantum properties directly perceptible. More practically, such a quantum microscope could aid development of atomic and molecular-scale technologies." And that is what this team at AMOLF has accomplished.

Christopher Smeenk goes on to say "In their elegant experiment, Stodolna, et al. observe the orbital density of the hydrogen atom by measuring a single interference pattern on a 2D detector. This avoids the complex reconstructions of indirect methods. The team starts with a beam of hydrogen atoms that they expose to a transverse laser pulse, which moves the population of atoms from the ground state to the 2s and 2p orbitals via two-photon excitation. A second tunable pulse moves the electron into a highly excited Rydberg state, in which the orbital is typically far from the central nucleus. By tuning the wavelength of the exciting pulse, the authors control the exact quantum numbers of the state they populate, thereby manipulating the number of nodes in the wave function."

"The portion of the electron wave initially directed toward the 2D detector (direct trajectories) interferes with the portion initially directed away from the detector (indirect trajectories). This produces an interference pattern on the detector. Stodolna, et al. show convincing evidence that the number of nodes in the detected interference pattern exactly reproduces the nodal structure of the orbital populated by their excitation pulse. Thus the photoionization microscope provides the ability to directly visualize quantum orbital features using a macroscopic imaging device."

According to Smeenk , the Dutch researchers "show that the measured interference pattern matches the nodal features of the hydrogen wave function, which can be calculated analytically. The demonstration establishes the microscopy technique as a quantum probe and provides a benchmark for more complex systems."

Aneta Stodolna concludes "We have shown that the concept of photoionization microscopy, as theoretically proposed more than 30 years ago... can be experimentally realized, providing both a beautiful demonstration of the intricacies of quantum mechanics and a fruitful playground where the fundamental implications of this theory can be further explored."