A second space Christmas for ESA: Huygens to begin its final journey to Titan 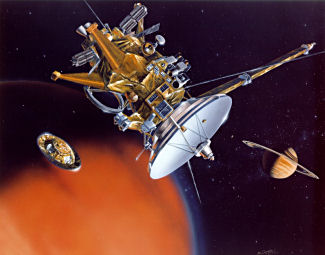 At 1.25 billion km from Earth, after a 7-year journey through the Solar system, ESA’s Huygens probe is about to separate from the Cassini orbiter to enter a ballistic trajectory toward Titan, the largest and most mysterious moon of Saturn, in order to dive into its atmosphere on 14 January. This will be the first man-made object to explore in-situ this unique environment, whose chemistry is assumed to be very similar to that of the early Earth just before life began, 3.8 billion years ago.

The Cassini-Huygens pair, a joint mission conducted by NASA, ESA and the Italian space agency (ASI), was launched into space on 15 October 1997. With the help of several gravity assist maneuvers during flybys of Venus, Earth and Jupiter, it took almost 7 years for the spacecraft to reach Saturn.

The Cassini orbiter, carrying Huygens on its flank, entered an orbit around Saturn on 1 July 2004, and began to investigate the ringed planet and its moons for a mission that will last at least four years.

On 17 December the orbiter will be placed on a controlled collision course with Titan in order to release Huygens on the proper trajectory, and on 21 December (some dates and times are subject to minor adjustment for operational reasons, except the entry time on 14 January which is know to within an accuracy of under 2 minutes) all systems will be set up for separation and the Huygens timers will be set to wake the probe a few hours before its arrival at Titan.

The Huygens probe is due to separate on the morning of 25 December at about 05:08 CET. Since the Cassini orbiter will have to achieve precise pointing for the release, there will be no real-time telemetry available until it turns back its main antenna toward Earth and beams the recorded data of the release. It will take over an hour (67 min) for the signals to reach us on Earth. The final data confirming the separation will be available later on Christmas Day.

After release, Huygens will move away from Cassini at a speed of about 35 cm per second and, to keep on track, will spin on its axis, making about 7 revolutions a minute. Huygens will not communicate with Cassini for the whole period until after deployment of the main parachute following entry into Titan’s atmosphere. On 28 December Cassini will then maneuver off collision course to resume its mission and prepare itself to receive Huygens data, which it will record for later playback to Earth.

Huygens will remain dormant until a few hours before its arrival at Titan on 14 January. The entry into the atmosphere is set for 11:15 CET. Huygens is planned to complete its descent in about two hours and 15 minutes, beaming back its science data to the Cassini orbiter for replay to Earth later in the afternoon. If Huygens, which is designed as an atmospheric probe rather than a lander, survives touchdown on the surface, it could deliver up to 2 hours of bonus data before the link with Cassini is lost.

Direct radio signals from Huygens will reach Earth after 67 minutes of interplanetary travel at the speed of light. An experiment has been set up by radio scientists that will use an array of radio telescopes around the Pacific to attempt to detect a faint tone from Huygens. If successful, early detection is not expected before around 11:30 CET.

The European Space Agency owns and manages the Huygens probe and is in charge of operations of the probe from its control centre in Darmstadt, Germany. NASA's Jet Propulsion Laboratory in Pasadena, California, designed, developed and assembled the Cassini orbiter. NASA's Deep Space Network, also managed by JPL, will be providing communications support via the Cassini orbiter and relaying it to ESA’s control centre in Darmstadt for processing. The Italian Space Agency provided the high-gain antenna on the Cassini orbiter, much of the radio system and elements of several of Cassini's science instruments. The Huygens payload has been provided by teams including from CNES, DLR, ASI and PPARC, and outside Europe, from NASA.