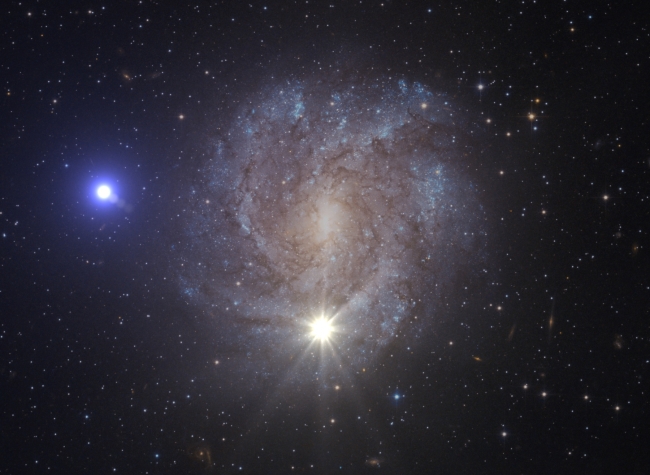 Scientists using the W. M. Keck Observatory and Pan-STARRS1 telescopes on Hawaii have discovered a star that breaks the galactic speed record, traveling with a velocity of about 1200 kilometers per second or 2.7 million miles per hour. This velocity is so high, the star will escape the gravity of our galaxy.

In contrast to the other known unbound stars, the team showed that this compact star was ejected from an extremely tight binary by a thermonuclear supernova explosion.

Stars like the Sun are bound to our Galaxy and orbit its center with moderate velocities. Only a few so-called hyper-velocity stars are known to travel with velocities so high that they are unbound, meaning they will not orbit the galaxy, but instead will escape its gravity to wander intergalactic space.

A close encounter with the supermassive black hole at the center of the Milky Way is typically presumed the most plausible mechanism for kicking these stars out of the galaxy.

A team of astronomers led by Stephan Geier (European Southern Observatory, Garching) observed the known high-velocity star know as US 708 with the Echellette Spectrograph and Imager instrument on the 10-meter, Keck II telescope to measure its distance and velocity along our line of sight. By carefully combining position measurements from digital archives with newer positions measured from images taken during the course of the Pan-STARRS1 survey, they were able to derive the tangential component of the star's velocity (across our line of sight).

Putting the measurements together, the team determined the star is moving at about 1200 kilometers per second – much higher than the velocities of previously known stars in the Milky Way galaxy. More importantly, the trajectory of US 708 means the supermassive black hole at the galactic center could not be the source of US 708's extreme velocity.

US 708 has another peculiar property in marked contrast to other hyper-velocity stars: it is a rapidly rotating, compact helium star likely formed by interaction with a close companion. Thus, US 708 could have originally resided in an ultra compact binary system, transferring helium to a massive white dwarf companion, ultimately triggering a thermonuclear explosion of a type Ia supernova. In this scenario, the surviving companion, US 708, was violently ejected from the disrupted binary as a result, and is now traveling with extreme velocity.

These results provide observational evidence of a link between helium stars and thermonuclear supernovae, and is a step towards understanding the progenitor systems of these mysterious explosions.


Animation of a white dwarf accumulating matter and the resulting supernova that ejected US708 at high velocity. (Video Credit: NASA, ESA and P. Ruiz-Lapuente, cut and coloured by S. Geier)

ESI (Echellette Spectrograph and Imager) is a medium-resolution visible-light spectrograph that records spectra from 0.39 to 1.1 microns in each exposure. Built at UCO/Lick Observatory by a team led by Prof. Joe Miller, ESI also has a low-resolution mode and can image in a 2 x 8 arcmin field of view. An upgrade provided an integral field unit that can provide spectra everywhere across a small, 5.7 x 4.0 arcsec field. Astronomers have found a number of uses for ESI, from observing the cosmological effects of weak gravitational lensing to searching for the most metal-poor stars in our galaxy.

Keck Observatory is a private 501(c) 3 non-profit organization and a scientific partnership of the California Institute of Technology, the University of California and NASA.