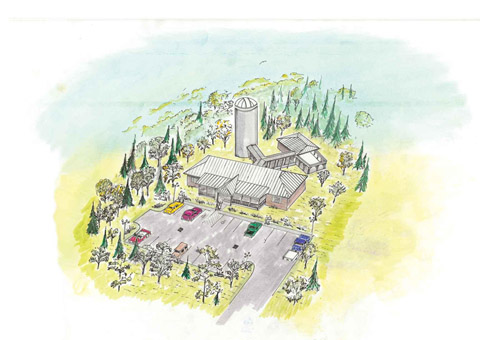 On Monday, June 28th a press conference was held in Tupper Lake, to announce the development of a large-scale observatory in the central Adirondacks. The Adirondack Public Observatory will be a state-of-the art facility with remote viewing capabilities.

The Adirondack Public Observatory, Inc. is a not-for-profit organization with a Board of Directors that come from various backgrounds, including area universities. President Marc Staves greeted the public and press, and
offered a brief history on the observatory project. Channel 5 meteorologist
Gib Brown, an APO Board member, then offered a power point presentation detailing the project schedule and costs.

The total project cost is expected to be over $500,000 and will include a dome with large telescope, a structure with a roll top roof that will house additional telescopes, and a control building. The APO will be located on a
portion of land owned by the Town of Altamont, known as the Big Wolf Road. Design Associates of Plattsburgh has been contracted to do the engineering work for the project.

The APO has scheduled several "Star Parties" and fund-raisers throughout the north country this summer, that will raise awareness of the project and help recognize it as a regional observatory.