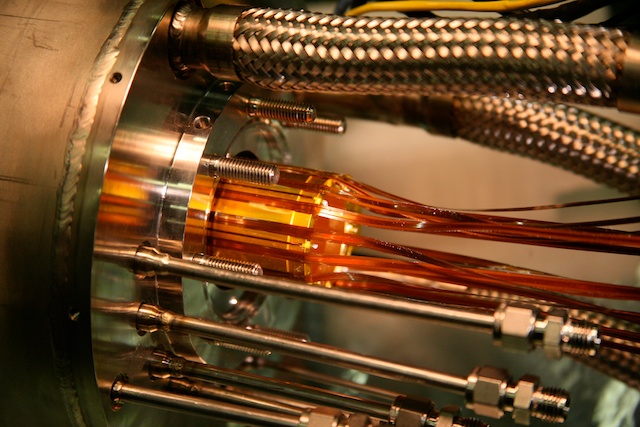 The ALPHA experiment at CERN1 has taken an important step forward in developing techniques to understand one of the Universe's open questions: is there a difference between matter and antimatter? In a paper published in Nature today, the collaboration shows that it has successfully produced and trapped atoms of antihydrogen. This development opens the path to new ways of making detailed measurements of antihydrogen, which will in turn allow scientists to compare matter and antimatter.

Antimatter - or the lack of it - remains one of the biggest mysteries of science. Matter and its counterpart are identical except for opposite charge, and they annihilate when they meet. At the Big Bang, matter and antimatter should have been produced in equal amounts. However, we know that our world is made up of matter: antimatter seems to have disappeared. To find out what has happened to it, scientists employ a range of methods to investigate whether a tiny difference in the properties of matter and antimatter could point towards an explanation.

One of these methods is to take one of the best-known systems in physics, the hydrogen atom, which is made of one proton and one electron, and check whether its antimatter counterpart, antihydrogen, consisting of an antiproton and a positron, behaves in the same way. CERN is the only laboratory in the world with a dedicated low-energy antiproton facility where this research can be carried out.

The antihydrogen programme goes back a long way. In 1995, the first nine atoms of man-made antihydrogen were produced at CERN. Then, in 2002, the ATHENA and ATRAP experiments showed that it was possible to produce antihydrogen in large quantities, opening up the possibility of conducting detailed studies. The new result from ALPHA is the latest step in this journey.

Antihydrogen atoms are produced in a vacuum at CERN, but are nevertheless surrounded by normal matter. Because matter and antimatter annihilate when they meet, the antihydrogen atoms have a very short life expectancy. This can be extended, however, by using strong and complex magnetic fields to trap them and thus prevent them from coming into contact with matter. The ALPHA experiment has shown that it is possible to hold on to atoms of antihydrogen in this way for about a tenth of a second: easily long enough to study them. Of the many thousands of antiatoms the experiment has created, ALPHA's latest paper reports that 38 have been trapped for long enough to study.

"For reasons that no one yet understands, nature ruled out antimatter. It is thus very rewarding, and a bit overwhelming, to look at the ALPHA device and know that it contains stable, neutral atoms of antimatter," said Jeffrey Hangst of Aarhus University, Denmark, spokesman of the ALPHA collaboration. “This inspires us to work that much harder to see if antimatter holds some secret.”

In another recent development in CERN's antimatter programme, the ASACUSA experiment has demonstrated a new technique for producing antihydrogen atoms. In a paper soon to appear in Physical Review Letters, the collaboration reports success in producing antihydrogen in a so-called Cusp trap, an essential precursor to making a beam. ASACUSA plans to develop this technique to the point at which beams of sufficient intensity will survive for long enough to be studied.

"With two alternative methods of producing and eventually studying antihydrogen, antimatter will not be able to hide its properties from us much longer," said Yasunori Yamazaki of Japan's RIKEN research centre and a member of the ASACUSA collaboration. "There's still some way to go, but we're very happy to see how well this technique works."

"These are significant steps in antimatter research," said CERN Director General Rolf Heuer, "and an important part of the very broad research programme at CERN."

Full information about the ASACUSA approach will be made available when the paper is published.