Astronomers Capture First Images of the Surface Features of Altair 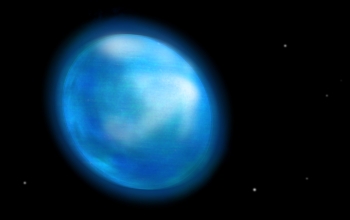 Using a suite of four telescopes, astronomers have captured an image of Altair, one of the closest stars to our own and a fixture in the summer sky.

The four telescopes were separated by nearly 300 yards. Vacuum tubes carried starlight from the four scopes to a U of Michigan-built device called the Michigan Infrared Combiner, known as MIRC.

The combiner allowed researchers to merge infrared light from four of CHARA's telescopes for the first time, simulating a single giant instrument three football fields across. The result was an image of unprecedented detail—roughly 100 times sharper than pictures from the Hubble Space Telescope.

While solar astronomers can view sunspots and storms on our home star's roiling surface in exquisite detail, most other stars have — until very recently — appeared as simple points of light through even the most powerful telescopes. Astronomers have recently imaged a few of the enormous, dying, red-giant stars, but this is the first time anyone has seen the surface of a relatively tiny hydrogen-burning star like our own Sun.

Beyond this technical milestone, the Altair observations provide surprising new insights that will force theorists to revise ideas about the behavior of rapid rotators like Altair.

"The galaxy is shaped by the effects of relatively rare but powerful hot, rapidly rotating stars," says John Monnier of the University of Michigan. "These stars have more in common with Altair than our own Sun and understanding Altair will allow us to better understand how these influential stars scattered throughout the galaxy operate."

"This powerful new tool allows us to zoom in on a star that's a million times farther away than the Sun," said Monnier. "We're testing the theories of how stars work in much more detail than ever before."

Monnier was part of an international team of astronomers that captured the image using four of the six telescopes at a facility on Mt. Wilson, California, operated by the Center for High Angular Resolution Astronomy (CHARA) at Georgia State University in Atlanta with partial support from the National Science Foundation (NSF).

The CHARA telescopes were able to make the breakthrough observation because they were outfitted with a novel system to clean up some of the distortions from Earth's atmosphere, a technology called the Michigan Infrared Combiner, developed at the University of Michigan in Ann Arbor, Michigan. Recent advances in fiber optic telecommunication technology made this new combiner possible.

"For looking at optical or infrared wavelengths of light, the CHARA telescope array has the world's longest spacing between telescopes and therefore the greatest ability to zoom in on the stars," adds Hal McAlister, CHARA director and a professor of astronomy at Georgia State. "This is just a monumental stepping stone for us," said Harold McAlister, director of CHARA and a regent's professor of astronomy at Georgia State University in Atlanta. "Main sequence stars are far and away the largest population of stars out there, and being able to make a picture of one creates tremendous opportunities for future research."

Until now, astronomers could gather tremendous amounts of data from stars, but could not capture images of what the stars looked like. Even to the largest telescopes, stars looked like the points of light we all see when we peer up into the night sky.

Using the telescopes as an interferometer -- a multi-telescope system that combines information from small, distantly spaced telescopes to create a picture as if taken from one large telescope --the researchers captured infrared lightwaves as if from a giant telescope 265 meters by 195 meters in dimension (100 times the size of the mirror on NASA's Hubble telescope and roughly 25 times the resolution).

"Without the interferometer, the ability to obtain such detailed images would not be possible with today's existing telescopes--or even the planned 30-meter telescopes," says Julian Christou, one of the NSF officers overseeing the research. "The critical component of the CHARA system is the beam combiner which allows the light from the individual small telescopes to be mixed together, which up to now had only been successfully used with radio telescopes such as the Very Large Array near Socorro, N.M."

The discovery is helping to answer questions about stars while raising others, particularly when researchers compare long-standing models to the new observations.

For example, Altair is a fast spinning "rapid rotator", just like Vega, one of Altair's partners (with the slow-spinning supergiant Deneb) in the Summer Triangle in the night sky.

Altair spins so quickly, about 300 kilometers per second at its equator, that it's shape is distorted: the star is a full 22 percent wider than it is tall. The new telescope measurements confirmed the oblong shape, yet showed slightly different surface temperature patterns than what models predicted.

Altair is one of the closest stars in our neighborhood, only about 15 light years away, and the researchers hope to image Vega as well as more distant stars in the future.

Altair is the brightest star in the constellation Aquila, The Eagle, and is clearly visible with the naked eye in Northern Hemisphere skies. The nearby star is hotter and younger than the sun and nearly twice its size. Altair rotates at 638,000 mph at its equator, roughly 60 times faster than our Sun.

"It's really whipping around and that's why, of course, it's spread out like a twirling ball of pizza dough," said Monnier.

In 1924, astronomer Hugo von Zeipel predicted that rapid rotators would display just this type of equatorial bulge. He also surmised that these stars would sport a dark band along the equator called gravity darkening. The bloated equator would appear dark because it is farther from the star's fiery nuclear core, and therefore cooler than the poles.

The CHARA picture of Altair is "the first image of a star that allows us to visually confirm that basic idea" of gravity darkening, Monnier said. But the Altair image displays even more equatorial darkening than standard models predict, pointing to flaws in current models, he said.

"Imaging stars is just the start. We are going to next apply this technology to imaging extrasolar planets around nearby stars," said Ming Zhao, an astronomy graduate student at Michigan who carried out the detailed stellar modeling.