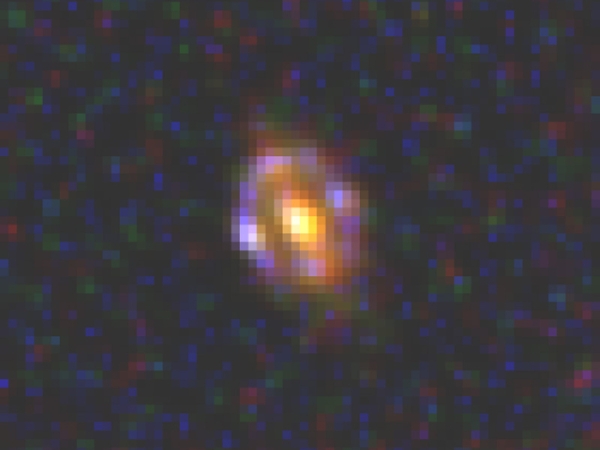 A team of astronomers led by Arjen van der Wel from the Max Planck Institute for Astronomy (MPIA) has found the most distant gravitational lens yet - a galaxy that, as predicted by Albert Einstein's general theory of relativity, deflects and intensifies the light of an even more distant object. The discovery provides a rare opportunity to directly measure the mass of a distant galaxy. But it also poses a mystery. Lenses of this kind should be exceedingly rare. Given this and recent other finds, astronomers either have been phenomenally lucky or, more likely, they have underestimated substantially the number of small, very young galaxies in the early universe.

Light is affected by gravity, and light passing a distant galaxy will be deflected as a result. Since the first find in 1979, numerous such gravitational lenses have been discovered. In addition to providing tests of Einstein's theory of general relativity, gravitational lenses have proved to be valuable tools. Notably, one can determine the mass of the matter that is bending the light, including the mass of the still enigmatic Dark Matter, which does not emit or absorb light and can only be detected via its gravity. Also, the lens magnifies the background light source, acting as a natural telescope that allows astronomers a more detailed look at distant galaxies than what is normally possible.

Now, astronomers have found the most distant gravitational lens yet. MPIA's Arjen van der Wel explains "The discovery was completely by chance. I had been reviewing observations from an earlier project with the goal of measuring masses of old, distant galaxies by looking at the motion of their stars. Among the galaxy spectra - the rainbow-like split of a galaxy's light into myriads of different shades of color - I noticed a galaxy that was decidedly odd. It looked like an extremely young galaxy, and at an even larger distance than I was aiming for. It shouldn't even have been part of our observing program."

Van der Wel followed up the spectra, which were taken with the Large Binocular Telescope in Arizona, by looking at images taken with the Hubble Space Telescope as part of the CANDELS and COSMOS surveys. The object looked like an old galaxy, a plausible target for the original observing program, but with some irregular features which, he suspected, meant that he was looking at a gravitational lens. Combining the available images and removing the haze of the lensing galaxy's collection of stars, the result was very clear: an almost perfect Einstein ring, indicating a gravitational lens with very precise alignment of the lens and the background light source (0.01 arcseconds).

The lensing mass is so distant that the light, after having been deflected, has traveled 9.4 billion years to reach us (redshift z = 1.53. Compare this with the total age of the universe of 13.8 billion years). The previous record holder was found thirty years ago, and it took less than 8 billion years for its light to reach us (z = 1).

Not only is this a new record, the object also serves an important purpose. The amount of distortion caused by the lensing galaxy allows for a direct measurement of its mass. This provides an independent test for astronomer's usual methods of estimating distant galaxy masses, which rely on extrapolation from their nearby cousins. Fortunately for astronomers, their usual methods pass the test.

But the discovery also poses a puzzle. Gravitational lenses are the result of a chance alignment. In this case, the alignment is very precise. To make matters more intriguing, the magnified object is a so-called star-bursting dwarf galaxy, a comparatively light galaxy (only about 100 million solar masses worth of stars), but extremely young (about 10 – 40 million years old) and producing new stars at an enormous rate. The chances for such peculiar galaxies to be gravitationally lensed are very small. Yet this is the second star-bursting dwarf galaxy found to be lensed. Either the astronomers have been phenomenally lucky. Or star-bursting dwarf galaxies are much more common than previously thought, forcing astronomers to re-think their models of galaxy evolution.

Van der Wel concludes "This has been a weird and interesting discovery. It was a completely serendipitous find, it combines two rather disparate topics I have been working on (massive, old galaxies, and young, star-bursting dwarfs) and it has the potential to start a new chapter in our description of galaxy evolution in the early universe."