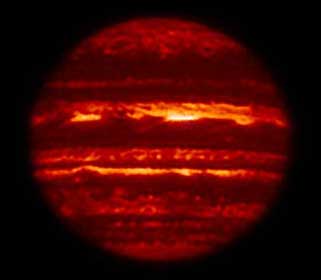 An international team led by French and Canadian astronomers has just discovered the coldest brown dwarf star ever observed. This new finding was made possible by research conducted with the Canada France Hawaii Telescope (CFHT) and Gemini North Telescope (both located in Hawaii) and the ESO/NTT located in Chile.

The brown dwarf is named CFBDS0059. Its temperature is about 350°C and its mass is about 15 to 30 times the mass of Jupiter. Located about 40 light-years from our solar system, it is an isolated object, meaning that it doesn't orbit another star.

Brown dwarfs are intermediate bodies between stars and giant planets (like Jupiter). The mass of brown dwarfs is usually less than 70 Jupiter masses. Because of their low mass, their central temperature is not high enough to maintain thermonuclear fusion reactions over a long time.

In contrast to a star like our Sun, which spends most of its lifetime burning hydrogen hence keeping a constant internal temperature, a brown dwarf spends its lifetime getting colder and colder after having been formed.

The first brown dwarfs were detected in 1995. Since then, this type of stellar object has been found to share common properties with giant planets, while differences remain. For example, clouds of dust and aerosols, as well as large amounts of methane, were detected in their atmosphere (for the coldest ones), just as in the atmosphere of Jupiter and Saturn. However, there were still two major differences. In the brown dwarf atmospheres, water is always in gaseous state, while it condenses into water ice in giant planets; and ammonia has never been detected in the brown dwarf near-infrared spectra, while it is a major component from Jupiter's atmosphere.

CFBDS0059, the newly-discovered brown dwarf looks much more like a giant planet than the known classes of brown dwarfs, both because of its low temperature and because of the presence of ammonia.

Because it contains ammonia and has a much lower temperature than do L and T dwarfs, CFBDS0059 might be the protoype of a new class of brown dwarfs to be called the Y dwarfs. This new class would become the coldest stellar objects, hence the missing link between giant planets and stars. Astronomers could then fill in the domain from the hottest stars to the giant planets of less than -100°C.

This discovery also has important implications in the study of extrasolar planets. The atmosphere of brown dwarfs looks very much like that of giant planets, therefore the same models are used to reproduce their physical conditions. Such modeling requires to be constrained with observations. Observing the atmospheres of extrasolar planets is indeed very hard because the light from the planets is embedded in the much stronger light from their parent star. Because brown dwarfs are isolated bodies, they are much easier to observe. Thus, looking to brown dwarfs with a temperature close to that of the giant planets will help in constraining the models of extrasolar planets' atmospheres.