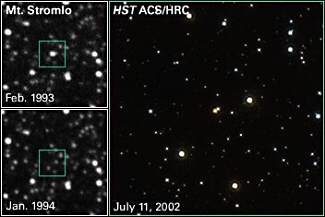 The measurement has been done on a small red star located some 1,800 light-years from Earth. Knowing the masses of stars is important in understanding stellar evolution.

Until now, scientists could only determine the masses of stars that are members of binary-star systems by applying Newton's laws of gravity to measurements of the stars' orbits around their center of gravity.

The dim red star first caught astronomers' attention in 1993, when it passed directly in front of a much more distant star, producing a phenomenon called gravitational microlensing. Microlensing, which was predicted by Einstein's theory of general relativity, occurs because of the warping of space around a massive object such as a star. The warped space acts like a lens, focusing and magnifying the light of the background star. The background star thus appears to brighten suddenly, as seen from Earth, during the brief interval when the two stars are precisely lined up.

There have been several large-scale searches for microlensing events, including the Massive Compact Halo Objects (MACHO) survey. Using a telescope in Australia, the MACHO survey team looked in the direction of the Large Magellanic Cloud, a satellite galaxy of our Milky Way. Astronomers monitored the brightness levels of millions of stars for several years, searching for a few microlensing events.

In most cases, the transiting star is much fainter than the background star. But the light from one of the events discovered in 1993, dubbed MACHO-LMC-5, didn't just brighten. Changes in its color suggested that the background star and the lensing star were of similar brightness. This raised the possibility that the two stars could be observed separately, if astronomers waited a few years to give the foreground star time to move away from its perfect alignment with the background star.

Ground-based telescopes, however, could not resolve the stars as two separate objects. So, astronomers turned to Hubble's Wide Field Planetary Camera 2 in 1999, and, later, in 2002 and 2003, to Hubble's Advanced Camera for Surveys. These observations succeeded in showing the two stars separately.

Seeing the two stars allowed astronomers to calculate the foreground star's distance from Earth, using a method called parallax. Due to the motion of the Earth around the Sun, the position of a nearby star will appear to shift relative to stars farther away. By measuring this shift, astronomers can triangulate the distance to the star. Surveyors use a similar method to measure distances on Earth. The distance derived in this way also agrees with the distance inferred from details of the brightness variations in 1993, based on subtle changes resulting from the motion of the Earth during the lensing event.

Once the distance to the lensing star was known, and since the distance to the Large Magellanic Cloud, where the background star is located, is also known, astronomers could calculate the only remaining unknown in the equation for microlensing, which is the mass of the foreground star. Its mass turns out to be one-tenth the mass of our own Sun. Although a low mass of about this amount was expected based on the faintness of the red star, astronomers are nevertheless excited by this first application of a new method for measuring stellar masses. They hope to apply it many times in the future, by using the planned Space Interferometry Mission satellite to observe many more microlensing events.