Astronomers Peek Inside a Quasar for the First Time 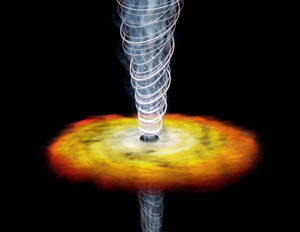 A quasar is an enormously bright object at the edge of our universe that emits massive amounts of energy. In an optical telescope, quasars appear point-like, similar to stars, from which they derive their name (quasar = quasi-stellar). Many astronomers believe that supermassive black holes may lie at the center of these quasars and power their explosive energy output.

For the first time, using a novel technique, astronomers have looked inside a quasar and have measured the so-called accretion disk around the black hole. The study lends further confirmation to what scientists have long suspected -- that the supermassive black holes of quasars are surrounded by super-heated disks of material that is spiraling into them.

The research team, led by Christopher Kochanek at Ohio State, includes Xinyu Dai and Nicholas Morgan at Ohio State and George Chartas and Gordon Garmire at Penn State. The team studied the interior structures of the two quasars, whose light became visible only when a galaxy happened to line up right between them and the Earth, magnifying their light like a lens. The astronomers likened this effect, known as "gravitational lensing" or "microlensing," to being able to look at the quasars under a microscope.

"There are many models that try to describe what's happening inside a quasar and, before, none of them could be ruled out. Now some of them can," said Xinyu Dai, a postdoctoral researcher at Ohio State who recently earned his doctoral degree at Penn State. "We can begin to make more precise models of quasars and gain a more complete view of black holes."

Garmire is the principal investigator of the X-ray camera on NASA's Chandra observatory, the Advanced CCD Imaging Spectrometer (ACIS), which the astronomers used to observe the gravitational lensing of the two quasars. This X-ray camera was conceived and developed for NASA by Penn State and the Massachusetts Institute of Technology under the leadership of Garmire, who is the Evan Pugh professor of astronomy and astrophysics at Penn State. Virtually every important Chandra discovery has been based on observations with the ACIS camera.

Seen from Earth, quasars, or quasi-stellar objects, look like stars. They are extremely bright, which is why we can see them even though they are among the most distant objects in the universe. Astronomers puzzled over quasars for decades before deciding that they most likely contain super-massive black holes that formed billions of years ago. The material that is falling into a black hole glows brightly and, in the case of quasars, it shines across a broad range of energies, including visible light, radio waves and X-rays.

"X-rays from the accretion disks of black holes probe emission regions closer to the black hole than those in the optical band," explained Chartas, a senior research associate at Penn State, who analyzed the X-ray data obtained from monitoring several of the objects in this microlensing study. "By comparing the X-ray lightcurves of a microlensing event to those in several optical bands, we inferred the relative sizes of the emission regions. This comparison allowed us to constrain the structure of a black hole's accretion disk at different wavelengths."

Quasars are so far away that, even in the most advanced telescopes, they normally look like a tiny pinpoint of light. But Einstein predicted that massive objects in space can sometimes act like lenses, bending and magnifying light from objects that are behind them, as seen by an observer. The effect is called gravitational lensing, and it enables astronomers to study some objects in otherwise unattainable detail. "Luckily for us, sometimes stars and galaxies act as very high-resolution telescopes," Kochanek said. "Now we're not just looking at a quasar, we're probing the very inside of a quasar and getting down to where the black hole is."

The scientists were able to measure the size of the so-called accretion disk around the black hole inside each quasar. In each, the disk surrounded a smaller area that was emitting X-rays, as if the disk material was being heated up as it fell into the black hole in the center. That's what they expected to see, given current notions about quasars. But the inside view will help them begin to refine those notions, Dai said.

Key to the project was NASA's Chandra X-Ray Observatory, which allowed the astronomers to precisely measure the brightness of the X-ray-emitting region of each quasar. They coupled those measurements to ones from optical telescopes that belong to the Small and Moderate Aperture Research Telescope System Consortium and the Optical Gravitational Lensing Experiment. The astronomers studied the variability of both the X-rays and visible light coming from the quasars and compared those measurements to calculate the size of the accretion disk in each. They used a computer program that Kochanek created especially for such calculations, and ran it on a 48-processor computer cluster. Calculations for each quasar took about a week to complete.

The two quasars they studied are named RXJ1131-1231 and Q2237+0305, and there's nothing special about them, Kochanek said, except that they were both gravitationally lensed. He and his group are currently studying 20 such lensed quasars, and they'd like to eventually gather X-ray data on all of them.