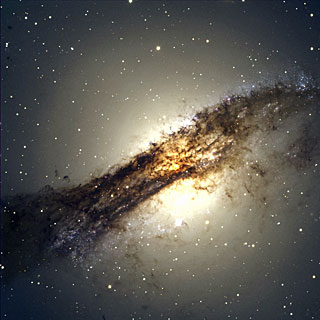 Active Galactic Nuclei (AGN) are thought to be powered by supermassive black holes that are devouring large amounts of matter. They have long been considered sites where high-energy particle production might take place. They swallow gas, dust and other matter from their host galaxies and spew out particles and energy.

While most galaxies have black holes at their center, only a fraction of all galaxies have an AGN. The exact mechanism of how AGNs can accelerate particles to energies 100 million times higher than the most powerful particle accelerator on Earth is still a mystery.

“We have taken a big step forward in solving the mystery of the nature and origin of the highest-energy cosmic rays, first revealed by French physicist Pierre Auger in 1938,” said Nobel Prize winner James Cronin, of the University of Chicago, who conceived the Pierre Auger Observatory together with Alan Watson of the University of Leeds. “We find the southern hemisphere sky as observed in ultra-high-energy cosmic rays is non-uniform. This is a fundamental discovery. The age of cosmic-ray astronomy has arrived. In the next few years our data will permit us to identify the exact sources of these cosmic rays and how they accelerate these particles.”

Cosmic rays are protons and atomic nuclei that travel across the universe at close to the speed of light. When these particles smash into the upper atmosphere of our planet, they create a cascade of secondary particles called an air shower that can spread across 40 or more square kilometers (15 square miles) as they reach the Earth’s surface.

“This result heralds a new window to the nearby universe and the beginning of cosmic-ray astronomy,” said Watson, a spokesperson of the Pierre Auger Observatory. “As we collect more and more data, we may look at individual galaxies in a detailed and completely new way. As we had anticipated, our observatory is producing a new image of the universe based on cosmic rays instead of light.”

The Pierre Auger Observatory records cosmic ray showers through an array of 1,600 particle detectors placed 1.5 kilometers (about one mile) apart in a grid spread across 3,000 square kilometers (1,200 square miles). Twenty-four specially designed telescopes record the emission of fluorescence light from the air shower. The combination of particle detectors and fluorescence telescopes provides an exceptionally powerful instrument for this research.

While the observatory has recorded almost a million cosmic-ray showers, only the rare, highest-energy cosmic rays can be linked to their sources with sufficient precision. Auger scientists so far have recorded 81 cosmic rays with energy above 4 x 10^19 electron volts, or 40 EeV. This is the largest number of cosmic rays with energy above 40 EeV recorded by any observatory. At these ultra-high energies, the uncertainty in the direction from which the cosmic ray arrived is only a few degrees, allowing scientists to determine the location of the particle’s cosmic source.

The Auger Observatory discovered that the 27 highest-energy events, with energy above 57 EeV, do not come equally from all directions. Comparing the clustering of these events with the known locations of 318 Active Galactic Nuclei, the collaboration found that most of these events correlated well with the locations of AGNs in some nearby galaxies, such as Centaurus A.

“Low-energy cosmic rays are abundant and come from all directions, mostly from within our own Milky Way galaxy. Until now the only source of cosmic ray particles known with certainty has been the sun. Cosmic rays from other likely sources such as exploding stars take meandering paths through space so that when they reach Earth it is impossible to determine their origins. But when you look at the highest-energy cosmic rays from the most violent sources, they point back to their sources. The challenge now is to record enough of these cosmic bullets to understand the processes that hurl them into space,” said Paul Mantsch, project manager of the Pierre Auger Observatory.

Unfortunately, the highest energy cosmic rays hit Earth at a rate of only about one event per square kilometer per century, which demands a very large observatory. Because of its size, the Auger Observatory can record about 30 ultra-high-energy events per year. The Auger collaboration is developing plans for a second, larger installation in Colorado to extend coverage to the entire sky while substantially increasing the number of high-energy events recorded.

“Our current results show the promising future of cosmic-ray astronomy,” said Auger cospokesperson Giorgio Matthiae, of the University of Rome. “So far we have installed 1400 of the 1600 particle detectors of the Auger Observatory in Argentina. A northern site would let us look at more galaxies and black holes, increasing the sensitivity of our observatory. There are even more nearby AGNs in the northern sky than in the southern sky.”