Black Hole Rips Apart a Star That Wandered Too Close 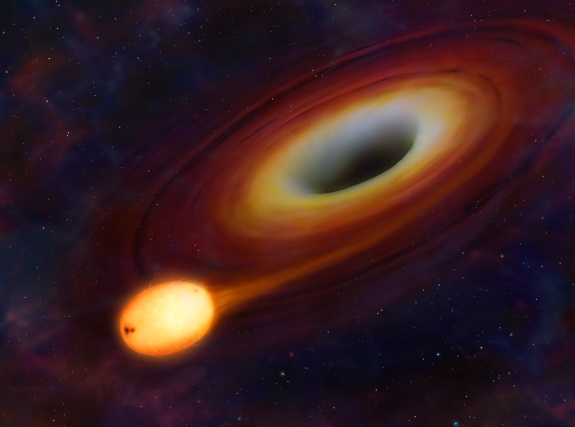 Observations led by astronomers at the University of Warwick have shown that the flash from one of the biggest and brightest bangs yet recorded by astronomers comes from a massive black hole at the center of a distant galaxy. The black hole appears to have ripped apart a star that wandered too close, creating a powerful beam of energy that crossed the 3.8 billion light years to Earth.

The high energy X-rays and gamma-rays persisted at an extremely bright level for weeks after the event, with bright flares arising when further chunks of the star apparently fell into the black hole, while at optical and infrared wavelengths it is as bright as a hundred billion suns. The extreme brightness of this event comes from the fact that it created a powerful beam of energy pointing a jet of light towards the Milky Way and thus concentrated into only a small fraction of the sky and which was detected at Earth 3.8 billion years after the star was ripped apart.

Dr Andrew Levan of the University of Warwick said "Despite the power of this the cataclysmic event we still only happen to see this event because our solar system happened to be looking right down the barrel of this jet of energy."

The new research clearly establishes that the source of this event - (known now as Swift 1644+57) is right at the heart of far away galaxy, 3.8 billion light years away, at a spot that would be in the constellation Draco. This conclusion comes from a combination of the most powerful telescopes on the ground and in space, working in tandem to pinpoint this unique and unprecedented event. These include the Hubble Space Telescope, Chandra X-ray Observatory, Swift satellite, and the Gemini and Keck Telescopes in Hawaii.

University of Warwick researcher Andrew Levan added: "The best explanation that so far fits the size, intensity, time scale, and level of fluctuation of the observed event, is that a massive black hole at the very center of that galaxy has pulled in a star and ripped it apart by tidal disruption. The spinning black hole then created the two jets one of which pointed straight to earth."

Professor Nial Tanvir based at the University of Leicester added "It is rare for stars to get very close to the black holes in the center of galaxies, but when they do, they will always come off second best."

The researchers used an array of telescopes to study Swift 1644+57, including Hubble Space Telescope, Swift satellite, the Chandra X-ray Observatory, the Gemini Observatory and the United Kingdom Infrared Telescope to study the blast. Swift's Burst Alert Telescope first discovered the source, on March 28, 2011 when it erupted with the first in a series of X-ray blasts.