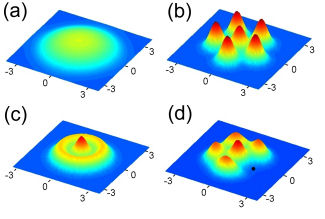 Once in a while we like to mix a little micro in with the macro here and this is one such occasion. -Ed.

... Uzi Landman and colleagues propose that the elementary particles known as bosons will act like their subatomic counterparts and crystallize when placed in two-dimensional traps.

One of two categories of elementary particles, bosons typically form cloudy aggregates called Bose-Einstein condensates when cooled to temperatures near absolute zero. In the condensate, the particles may be pictured as sitting on top of one another, occupying the same space. But that’s only when their interactions are relatively weak, said Uzi Landman, director of the Center for Computational Materials Science, Regents’ professor and Callaway chair of physics at Georgia Tech.

"When the repulsive interaction between the bosons is increased, they separate and instead of forming a condensate they crystallize, acting more like their counterpart fermions. Experimentally, such behavior was shown this year to happen in one-dimension, now we predicted theoretically that it will happen in two-dimensions. Furthermore, through a straightforward extension of our method one could easily extend it to three-dimensions,” he said.

In quantum physics, all elementary particles such as quarks, electrons and gluons are classified as either fermions or bosons, depending on their spin. The spin of bosons takes integer values and fermions have half-integer values of their spin. Electrons and quarks –two examples of fermions – are the basic building blocks of matter, while bosons such as photons and gluons govern the fundamental forces of nature such as electromagnetism.

In 1960 it was theoretically predicted by Marvin Girardeau, now at the University of Arizona, that in one-dimensional space, bosons would act more like fermions and form a lattice if their repulsion became sufficiently strong. It took more than 40 years for experimental physicists to test the theory, but recently two different groups of scientists published articles in Science and Nature verifying the theory, using experiments carried out on trapped bosons.

Now, Landman, his colleague Constantine Yannouleas, and graduate student Igor Romanovsky, discovered, through theoretical modeling involving computer-based simulations of up to seven bosonic atoms in a harmonic two-dimensional trap, that instead of clumping together to form Bose-Einstein condensates, the bosons localize in space forming polygonal crystals. For example, six bosons crystallize into a two-dimensional pentagon-shaped crystal with one boson in the center. “The forces between the bosons are repulsive,” said Landman. “The trap is the only thing holding them together. As soon as you release the trap, the crystal goes away.”

Landman and Yannouleas do not think that it will take another 40 years for experimental physicists to test the theoretical prediction. “Now that people know how to make Bose-Einstein condensates, use traps, and vary the strength of the interactions, testing could be done faster,” Landman explained.

As for potential applications of this research, Landman notes that “the main merit of this research is in increasing our fundamental understanding of nature and of the processes underlying physical behavior under certain extreme conditions”. “Nevertheless,” he adds, “out of such basic scientific contributions other things may develop, for example in the area of quantum computing – you just have to wait and see.”

In the 1920s Indian physicist Satyendra Nath Bose and Albert Einstein predicted that atoms cooled to temperatures close to absolute zero would collapse to their lowest quantum state, forming a state of matter that became known as the Bose-Einstein condensate. It wasn’t until 1995 that physicists in Boulder, Colorado, and at MIT were successful in creating the condensate. And in 2001, Eric Cornell, Wolfgang Ketterle and Carl Wieman were awarded the Nobel Prize in Physics for this achievement.

Theoretical simulations of six harmonically trapped bosons. (a) The density of a Bose-Einstein condensate formed for weak repulsive interactions. (b) The density distribution of the symmetry-broken crystalline solution that is predicted to form for stronger repulsive interactions. (c) Density distribution of the symmetry-restored state, showing overall circular symmetry. (d) Conditional probability map, with the reference point located on one of crystalline sites (marked by a black dot), illustrating a predicted pentagonal lattice with one boson at the center. Distances are in units of L0 which is determined by the characteristic harmonic frequency of the trap, and the effective mass of the bosons.