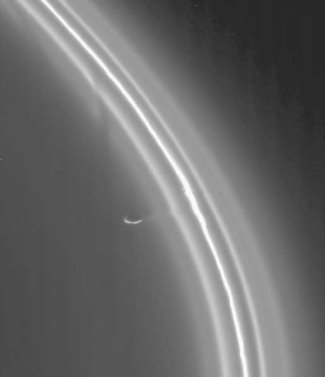 This potato-shaped moon is also believed to be responsible for kinks within Saturn's thin F ring, a contorted, narrow ring flanked by two small moons, Prometheus and Pandora. The thievery and the detailed behavior of kinks were observed for the first time ever in images taken by the Cassini spacecraft.

In an image taken on Oct. 29, Prometheus is seen stealing particles from the F ring while connected to the ringlets by a faint streak of material. A movie sequence of the ring, taken on Oct. 28, captures in freeze-frame motion the zigzagging kinks and knots, some of which are almost certainly caused by Prometheus.

The kinks look like "hiccups" traveling around the ring. Consisting of 44 frames taken three minutes apart, the sequence represents almost two hours, or about one-eighth of the orbital period of F ring particles around the planet.

Cassini was on a flight path that took the spacecraft away from the planet and farther south, so that the rings appear to tilt upward. The top portion of the F ring is closer to the spacecraft, while the bottom portion is farther away and curves around the far side of Saturn.

Scientists are not sure exactly how Prometheus is interacting with the F ring here, but they have speculated that the moon might be gravitationally pulling material away from the ring. Scientists speculate that the ring particles may end up in a slightly different orbit from the one they were in prior to getting a 'kick' from the moon. These kicks occur at specific locations in the rings and can actually cause large waves or knots to form. In the still image, gaps in the diffuse inner strands are seen. All these features appear to be due to the influence of Prometheus in ways that are not fully understood.

Saturn's moon Prometheus is following in the footsteps of the legendary Titan for which it is named. In Greek mythology, Prometheus stole fire from the gods and gave it to the mortals.

Scientists will use what they learn about Prometheus' interaction with the F ring to understand the gravitational exchanges between moons and rings, which give rise to so much of the structure that is observed in Saturn's rings.

The Cassini-Huygens mission is a cooperative project of NASA, the European Space Agency and the Italian Space Agency. The Jet Propulsion Laboratory, a division of the California Institute of Technology in Pasadena, manages the Cassini-Huygens mission for NASA's Science Mission Directorate, Washington, D.C. The Cassini orbiter and its two onboard cameras were designed, developed and assembled at JPL. The imaging team is based at the Space Science Institute, Boulder, Colo.

The new still and movie are available at http://www.nasa.gov/cassini