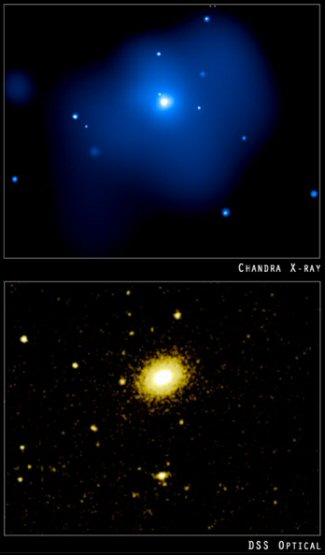 ... The observed galaxy, known as NGC 4555, is unusual in that it is a fairly large, elliptical galaxy that is not part of a group or cluster of galaxies. In a paper to be published in the Nov. 1, 2004, issue of the Monthly Notices of the Royal Astronomical Society, Ewan O'Sullivan of the Harvard-Smithsonian Center for Astrophysics in Cambridge, Mass., and Trevor Ponman of the University of Birmingham, United Kingdom, use the Chandra data to show that the galaxy is embedded in a cloud of 10-million-degree-Celsius gas.

A growing body of evidence indicates that dark matter — which interacts with itself and "normal" matter only through gravity – is the dominant form of matter in the universe. According to the popular "cold dark matter" theory, dark matter consists of mysterious particles left over from the dense early universe that were moving slowly when galaxies and galaxy clusters began to form.

Most large elliptical galaxies are found in groups and clusters of galaxies, and are likely the product of the merger of two spiral galaxies. In such an environment, the dark matter halos can be stripped away by gravitational tidal force and added to other galaxies or the group as a whole. Therefore, it is difficult to determine how much dark matter the original galaxies had, and how much they have lost to the group as a whole through interactions with their environment.

The importance of the issue of the intrinsic amount of dark matter associated with an elliptical galaxy has recently increased owing to a report by an international team of astronomers led by Aaron Romanowsky of the University of Nottingham, United Kingdom. This team found little, if any evidence of dark matter in three elliptical galaxies. Two of these were in loose galaxy groups, and one was isolated. Their result, based on optical data from the 4.2 meter William Herschel Telescope on the Spanish island of La Palma, is in clear conflict with the X-ray data on NGC 4555. The optical technique used to search for dark matter in the nearby elliptical galaxies could not be applied to NGC 4555 because it is more than 3 times as far away from Earth.

"This is clearly a question which deserves further consideration," said O'Sullivan. "It seems likely that much more theoretical and observational work on elliptical galaxies will be required before this issue can be resolved."