Curiouser and Curiouser -- Why is Interstellar Asteroid Oumuamua Accelerating as it Leaves the Solar System? 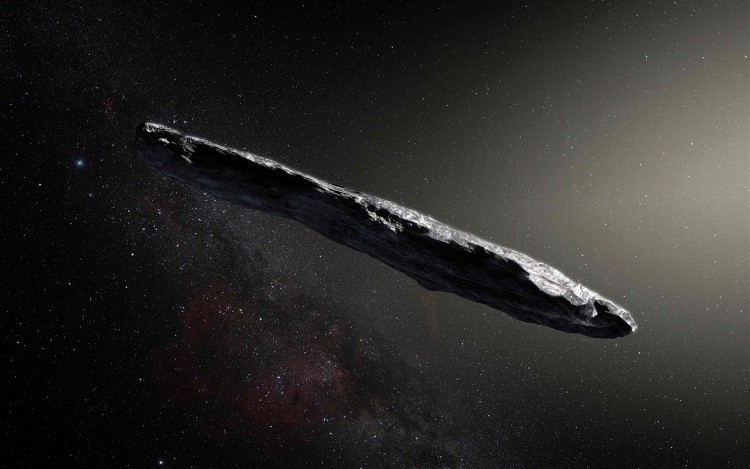 It came from outer space -- Artist's concept of interstellar asteroid 1I/2017 U1 (Oumuamua) as it passed through the Solar System after its discovery in October 2017. Once detected, astronomers scrambled to observe the intriguing asteroid as it zipped through the Solar System at a steep trajectory from interstellar space – The first confirmed object from another star. Data revealed the interstellar interloper to be a rocky, cigar shaped object with a somewhat reddish hue. The asteroid, about one quarter mile (400 meters) long and highly elongated, is ten times as long as it is wide. While its elongated shape is quite surprising and unlike asteroids seen in our Solar System, it may provide new clues into how other star systems form. New observations and analyses suggest that this unusual object has been wandering through the Milky Way, unattached to any star system, for hundreds of millions of years before its chance encounter with our star system. (Image Credit: European Southern Observatory – ESO, M. Kornmesser)

Curiouser and Curiouser -- Why is Interstellar Asteroid Oumuamua Accelerating as it Leaves the Solar System?

More than a year has passed since the discovery of 1I/2017 U1 Oumuamua, a bizarre body that burst onto the scene and then disappeared into the distance just as quickly as it arrived. During Oumuamua’s visit, astronomers gathered some 800+ observations from telescopes around the world, which together reveal a strange light curve that raises more questions than answers.

A few things are agreed upon. Oumuamua’s orbit indicates it originated outside of our Solar System, making it the first visiting interstellar body we’ve witnessed. Its shape appears to be highly elongated, suggesting it’s more cigar-shaped than spherical. And its light curve reveals a periodicity of roughly 8 hours, potentially indicating the speed at which this odd body rotates.

But many unsolved questions remain. What are Oumuamua’s structure, composition, and shape? Where did it come from? How was it launched onto its journey to our Solar System? And now a new question – Why is Oumuamua accelerating as it leaves the Solar System?

One of ‘Oumuamua’s biggest mysteries relates to the discovery late last year that this asteroid wasn’t moving just under the influence of gravity. Instead, Oumuamua was experiencing a mysterious additional acceleration away from the Sun.

What could cause ‘Oumuamua’s added boost? Some scientists have suggested that radiation pressure, the push from solar photons hitting the object, could speed it up enough to explain observations. But for this to work, the asteroid would need an enormous surface-area-to-mass ratio.

One study suggested this could be achieved if Oumuamua took the form of a giant light sail less than a millimeter thick (naturally reinvigorating the “is it aliens?” debate). But a recent study by Amaya Moro-Martin, of the Space Telescope Science Institute,  suggests there might be another way: Oumuamua could have a more ordinary shape, but an exceedingly low density.

The least dense manmade solid, aerographene, has a density on the order of 10-4 g/cm3, or approximately 10 percent the density of air. Moro-Martin suggests that an object with a tenth of this density, approximately 10-5 g/cm3, could get enough of a boost from the Sun to explain our observations of Oumuamua.

Given this low density value, is this scenario actually likely? It turns out that fluffy, porous materials occur naturally in space in the form of aggregates of icy dust particles. If the icy-aggregate explanation for Oumuamua is correct, then the asteroid could have formed in the outer reaches of a nearby proto-planetary disk, and this could open a new window onto the study of the building blocks of planets around young stars.

There’s a more mundane explanation for Oumuamua’s anomalous acceleration than radiation pressure, however: Outgassing, which occurs as volatile materials heat beneath a body’s surface and evaporate. This process is commonly seen in the jetted tails of comets, but there are some problems with using it to explain Oumuamua’s motion. First, no outgassing was observed from Oumuamua. In fact, Spitzer observations placed strict limits on the amount of carbon-based material that could be evaporating from it. Second, calculations show that traditional comet-like outgassing would create torques that would spin Oumuamua up rapidly, causing it to fly apart.

A new study may have found a way around these problems, however. A publication led by Darryl Seligman of Yale University suggests that Oumuamua may have been accelerated by outgassing not from a fixed point, but from migrating jets that follow the warmth, tracking the side of the asteroid closest to the Sun. Instead of spinning out of control, Oumuamua’s motion might then resemble a pendulum, gently rocking back and forth to produce the 8 hour period seen in the light curve.

What about the Spitzer constraints on the visible evaporation? Seligman and collaborators suggest that the outgassing was primarily in the form of water vapor rather than carbon-based material. This could occur if the body had an unusually carbon-poor composition compared to a typical comet.

Could one of these explanations solve the mystery of Oumuamua’s odd acceleration? Or could the true answer be a combination of proposed scenarios? With Oumuamua long gone, we can’t be sure until we spot another interstellar visitor like it.

"For decades we've theorized that such interstellar objects are out there, and now, for the first time, we have direct evidence they exist," said Thomas Zurbuchen, associate administrator for NASA's Science Mission Directorate in Washington. "This history making discovery is opening a new window to study formation of solar systems beyond our own."

Immediately after its discovery in late 2017, telescopes around the world, including ESO's Very Large Telescope (VLT) in Chile, were called into action to measure the object's orbit, brightness, and color. Urgency for viewing from ground based telescopes was vital to get the best data.

Combining the images from the FORS instrument on the ESO telescope, using four different filters, with those of other large telescopes, a team of astronomers led by Karen Meech of the Institute for Astronomy in Hawaii found that Oumuamua varied in brightness by a factor of 10 as it spinned on its axis every 7.3 hours. No known asteroid or comet from our Solar System varies so widely in brightness, with such a large ratio between length and width. The most elongated objects we have seen to date are no more than three times longer than they are wide.

"This unusually big variation in brightness means that the object is highly elongated -- about ten times as long as it is wide, with a complex, convoluted shape," said Meech. "We also found that it had a reddish color, similar to objects in the outer Solar System, and confirmed that it is completely inert, without the faintest hint of dust around it."

These properties suggest that Oumuamua is dense, composed of rock and possibly metals, has no water or ice, and that its surface was reddened due to the effects of irradiation from cosmic rays over hundreds of millions of years.

A few large ground based telescopes continued to track the asteroid as it rapidly faded and receded from our planet. Two of NASA's space telescopes (Hubble and Spitzer) tracked the object, which was travelling about 85,700 miles per hour (38.3 kilometers per second) relative to the Sun. Its location, when detected, was approximately 124 million miles (200 million kilometers) from Earth -- the distance between Mars and Jupiter and its outbound path was about 20 degrees above the plane of planets that orbit the Sun. The object passed the orbit of Mars around November 2017, and based on calculations, it passed Jupiter's orbit in May of 2018 and traveled beyond Saturn's orbit in January 2019. As it leaves our Solar System, Oumuamua is heading for the constellation Pegasus.

Observations from large ground based telescopes continued until the object became too faint to be detected, sometime after December 2017. NASA's Center for Near Earth Object Studies (CNEOS) continued to take all available tracking measurements to refine the trajectory of 1I/2017 U1 as it exited our Solar System.


This remarkable object was discovered October 19, 2017, by the University of Hawaii Pan-STARRS1 telescope, funded by NASA's Near Earth Object Observations (NEOO) Program, which finds and tracks asteroids and comets in Earth's neighborhood. NASA Planetary Defense Officer Lindley Johnson said, "We are fortunate that our sky survey telescope was looking in the right place at the right time to capture this historic moment. This serendipitous discovery is bonus science enabled by NASA's efforts to find, track, and characterize Near Earth Objects that could potentially pose a threat to our planet."

Orbital calculations suggested that the object came from the approximate direction of the bright star Vega, in the northern constellation of Lyra. However, it took so long for the interstellar object to make the journey, even at the speed of about 59,000 miles per hour (26.4 kilometers per second), that Vega was not near that position when the asteroid was there about 300,000 years ago.

While originally classified as a comet, observations from ESO and elsewhere revealed no signs of cometary activity after it slingshotted past the Sun on September 9, 2017 at a blistering speed of 196,000 miles per hour (87.3 kilometers per second).

The object has since been reclassified as Interstellar Asteroid 1I/2017 U1 by the International Astronomical Union (IAU), which is responsible for granting official names to bodies in the Solar System and beyond. In addition to the technical name, the Pan-STARRS team dubbed it Oumuamua (pronounced oh MOO-uh MOO-uh), which is Hawaiian for "a messenger from afar arriving first."

Astronomers estimate that an interstellar asteroid similar to Oumuamua passes through the inner solar system about once per year, but they are faint and hard to spot and have been missed until now. It is only recently that survey telescopes, such as Pan-STARRS, are powerful enough to have a chance to discover them.

"What a fascinating discovery this is" said Paul Chodas, manager of the Center for Near Earth Object Studies at NASA's Jet Propulsion Laboratory (JPL), Pasadena, California. "It's a strange visitor from a faraway star system, shaped like nothing we've ever seen in our own Solar System neighborhood."