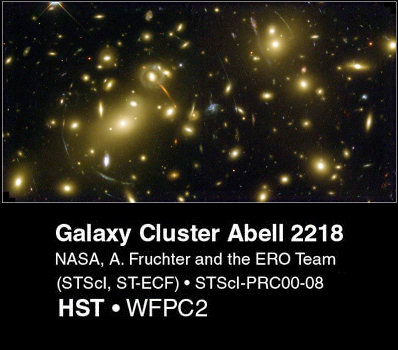 Astronomers from the University of St. Andrews in the UK and the Free University of Brussels have fine-tuned an alternative theory of gravity originally developed by Moti Milgrom of the Weizmann Institute in Isreal over twenty years ago. Dr. Hong Sheng Zhao of St. Andrews and Dr Benoit Famaey of Brussels have developed a 'simple' formula that explicitly tells how gravity should behave in the transition zone between the solar system, where the laws of Newton and Einstein apply, and the outskirts of galaxies.

With their formula, these researchers aim to prove whether Einstein's theory is in fact correct and whether the excessive amounts of Dark Matter that are needed to maintain consistency with obserations actually exist. Their formula suggests that gravity drops less sharply with distance and changes subtly from solar systems to galaxies and to the universe at large.

Theories of the physics of gravity were first developed by Isaac Newton in 1687 and refined by Albert Einstein's general theory of relativity in 1916 to allow for light bending. While it is the earliest-known force, gravity is still very much a mystery with theories still unconfirmed by astronomical observations in space.

The problem with the golden laws of Newton and Einstein is while they work very well on earth, they do not explain the motion of stars in galaxies and the bending of light accurately. In galaxies, stars rotate rapidly about a central point, held in orbit by the gravitational attraction of the matter in the galaxy. However astronomers found that they were moving too fast to be held by their mutual gravity. So without enough gravity to hold the galaxies together, stars should be thrown off in all directions. But that is not what is happening, so there must be something else at work... Enter the concept of Dark Matter.

The solution to this, proposed by Fritz Zwicky in 1933, was that there was unseen material in the galaxies, making up enough gravity to hold the galaxies together. As this material emits no light astronomers call it 'Dark Matter.' It is thought to account for up to 90% of matter in the Universe. Not all scientists accept the Dark Matter theory however. A rival solution was proposed by Moti Milgrom in 1983 and backed up by Jacob Bekenstein of the Hebrew University in Jerusalem in 2004. Instead of the existence of unseen material, Milgrom proposed that astronomers' understanding of gravity was incorrect. He proposed that a boost in the gravity of ordinary matter is the cause of this acceleration.

Milgrom's theory has been worked on by a number of astronomers since then and Dr. Zhao and Dr. Famaey have proposed a new formulation of Milgrom's work that overcomes many of the problems previous versions have faced.

They have created a formula that allows gravity to change continuously over various distance scales and, most importantly, fits the data for observations of galaxies. To fit galaxy data equally well in the rival Dark Matter paradigm would be as challenging as balancing a ball on a needle. This unlikely outcome is what motivated the two astronomers to look at an alternative gravity idea.

Legend has it that Newton began thinking about gravity when an apple fell on his head. But according to Dr. Zhao, "It is not obvious how an apple would fall in a galaxy. Mr Newton's theory would be off by a large margin - his apple would fly out of the Milky Way. Efforts to restore the apple on a nice orbit around the galaxy have over the years led to two schools of thoughts: Dark Matter versus non-Newtonian gravity. Dark Matter particles come naturally from physics, with beautiful symmetries and explain cosmology beautifully; they tend to be everywhere. The real mystery is how to keep them away from some corners of the universe. Also Dark Matter comes hand- in-hand with Dark Energy. It would be more beautiful if there were one simple answer to all these mysteries".

Dr. Zhao continued "There has always been a fair chance that astronomers might rewrite the law of gravity. We have created a new formula for gravity which we call 'the simple formula,' and which is actually a refinement of Milgrom's and Bekenstein's. It is consistent with galaxy data so far, and if its predictions are further verified for solar system and cosmology, it could solve the Dark Matter mystery. We may be able to answer common questions such as whether Einstein's theory of gravity is right and whether the so-called Dark Matter actually exists."

"A non-Newtonian gravity theory is now fully specified on all scales by a smooth continuous function. It is ready for fellow scientists to falsify. It is time to keep an open mind for new fields predicted in our formula while we continue our search for Dark Matter particles."

Dr. Famaey commented "It is possible that neither the modified gravity theory, nor the Dark Matter theory, as they are formulated today, will solve all the problems of galactic dynamics or cosmology. The truth could in principle lie in between, but it is very plausible that we are missing something fundamental about gravity, and that a radically new theoretical approach will be needed to solve all these problems. Nevertheless, our formula is so attractively simple that it is tempting to see it as part of a yet unknown fundamental theory. All galaxy data seem to be explained effortlessly."