Did Life on Earth Start Between the Sheets... Of Mica that is? 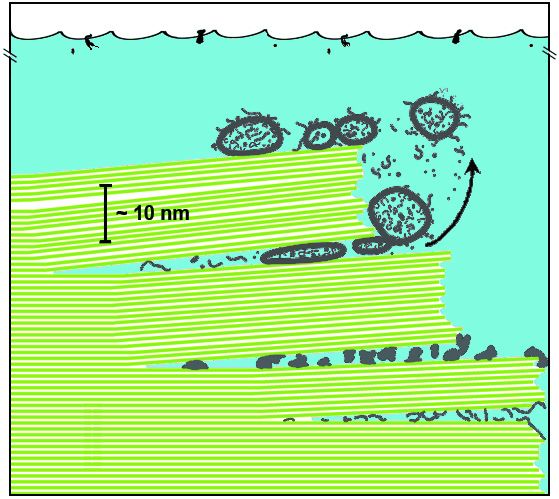 Several lines of evidence support the idea that life originated with molecules that lay between mica sheets.

That age-old question, "where did life on Earth start?" now has a new answer. If the life between the mica sheets hypothesis is correct, life would have originated between sheets of mica that were layered like the pages in a book.

The so-called "life between the sheets" mica hypothesis was developed by Helen Hansma of the University of California, Santa Barbara, with funding from the National Science Foundation (NSF).

According to the "life between the sheets" mica hypothesis, structured compartments that commonly form between layers of mica -- a common mineral that cleaves into smooth sheets -- may have sheltered molecules that were the progenitors to cells. Provided with the right physical and chemical environment in the structured compartments to survive and evolve, the molecules eventually reorganized into cells, while still sheltered between mica sheets.

Mica chunks embedded in rocks could have provided the right physical and chemical environment for pre-life molecules and developing cells because:

Because mica surfaces are hospitable to living cells and to all the major classes of large biological molecules, including proteins, nucleic acids, carbohydrates, and fats, the "between the sheets" mica hypothesis is consistent with other well-known hypotheses that propose that life originated as RNA, fatty vesicles or primitive metabolisms. Hansma says a "mica world" might have sheltered all the ancient metabolic and fat-vesicle and RNA "worlds."

Hansma also says that mica would provide a better substrate for developing cells than other minerals that have been considered for that role. Why? Because most other minerals would probably have tended to intermittently become either too wet or too dry to support life. By contrast, the spaces between mica sheets would probably have undergone more limited wet/dry cycles that would support life without reaching killing extremes. In addition, many clays that have been considered as potential surfaces for life's origins respond to exposure to water by swelling. By contrast, mica resists swelling and would therefore provide a relatively stable environment for developing cells and biological molecules, even when it did get wet.

Hansma sums up her hypothesis by observing that "mica would provide enough structure and shelter for molecules to evolve but also accommodate the dynamic, ever-changing nature of life."

What's more, Hansma says that "mica is old." Some micas are estimated to be over 4 billion years old. And micas such as biotite have been found in regions containing evidence of the earliest life-forms, which are believed to have existed about 3.8 million years ago.

Says Helen Hansma, "Mica sheets are atomically flat, so we can see DNA molecules on the mica surface without having to cover the DNA with something that makes it look bigger and easier to see. Sometimes we can even see DNA molecules swimming on the surface of mica, under water, in the AFM. Mica sheets are so thin (one nanometer) that there are a million of them in a millimeter-thick piece of mica."

Hansma's "life between the sheets" hypothesis first struck her a few years ago, after she and family members had collected some mica from a Connecticut mine. When she put water on a piece of the mica under her dissecting microscope, she noticed a greenish organic 'crud' at some step edges in the mica. "It occurred to me that this might be a good place for the origins of life -- sheltered within these stacks of sheets that can move up and down in response to flowing water, which could have provided the mechanical energy for making and breaking chemical bonds," says Hansma.

Hansma says that recent advancements in imaging techniques, including the AFM, made possible her recent research, leading to her "between mica sheets" hypothesis. She adds that direct support for her hypothesis might be obtained from additional studies involving mica sheets in an AFM, being subjected its push-and-pull forces while sitting in liquids resembling an early ocean.